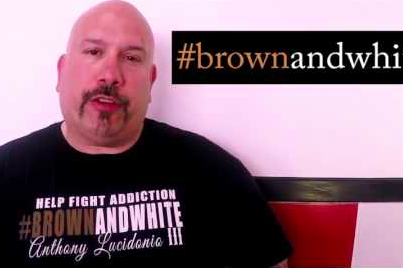 Just a few months after heroin tragically claimed the life of Anthony Luciano III, his father is making good on a pledge to combat the harmful stigma and shame surrounding addiction.

In a PSA released last week, Luke Jr., who once battled a crystal meth addiction, called on families across the country to share pictures of their lost loved ones and proudly display their progress in overcoming their illness.

"Let the world know they are not a number," Luke Jr. said. "They are a human being that lived, struggled and died fighting this addiction."

Tony Luke III died at the age of 35 on March 27 in Logan Township, New Jersey. He had just begun working with his father again at the restaurant's reopened Sicklerville location when he passed away. Luke Jr. described his son as seemingly happy at the time of his death, further underscoring the importance of vigilance and action in the face of a loved one's addiction.

Within weeks, Luke Jr.'s #BrownandWhite campaign has inspired participation and supportive posts from around the country.

"I am not ashamed" we need to share the real stories behind people who die due to their addictions #brownandwhite https://t.co/VCti8AOp14

Another day clean & sober because friends & family helped me get over the stigma of addiction. Conversations can save lives.#brownandwhite pic.twitter.com/mkp1hR2ueR

@tonylukejr Lost both my uncle and my cousin to heroin. Aged 42 and 20 years old. It's got to stop. #brownandwhite pic.twitter.com/YVwWJO3OY1

Luke Jr. has been attending speaking events and visiting with local families to support the new campaign. His mission and message appear to be catching on.

“I don’t want to establish a foundation or a website," Luke Jr. said. “There will be no fundraising. I want this to be organic. I want to let others who have lost a loved one to this dreadful disease know they are not alone."