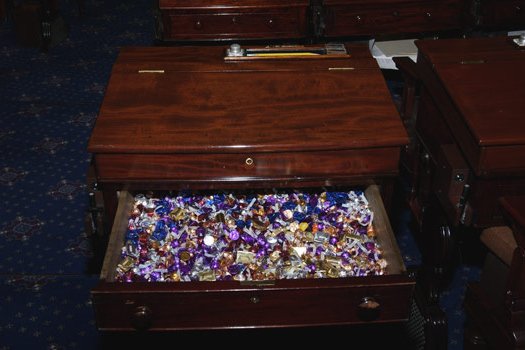 In an undated photo, the "Candy Desk" is shown.

Sen. Pat Toomey will continue to sweeten deals in the U.S. Senate, his office announced Thursday.

Pennsylvania's Republican senator has been assigned again to the coveted "Candy Desk," a tradition that dates back to 1965. The seat's holder is responsible for providing sweet treats for fellow senators.

Toomey, who assumed the role in 2015, assured his constituents that the desk would be filled with chocolate made in the Keystone State.

Happy to have sweetest seat in #Senate. I am keeping the coveted Candy Desk. Will be full of PA’s best chocolate. @CandyUSA

“My fellow Senators are going to need Pennsylvania’s finest chocolates to make it through the many, many votes in the coming weeks," Toomey said. "I hope they will set partisanship aside and join me at my desk for some candy."

The seat is located closest to the chamber's most heavily-used entrance in the back row on the Republican side.

Sen. George Murphy of California started the tradition by stocking his desk with candy in 1965. Each GOP senator who occupied the desk since has continued the practice.

Toomey is the second Pennsylvania senator to hold the seat. Sen. Rick Santorum served in the role from 1997 to 2007 and is the longest-running occupant in "Candy Desk" history.

“Our state is home to the best confectioners in the world. Hershey’s, of course, is headquartered in Central Pennsylvania," Toomey said. "Mars makes Three Musketeers in Elizabethtown. Asher’s is based in Kulpsville. Just Born creates Peeps in Bethlehem. One senior Republican senator, who shall remain nameless, makes a special request for Gertrude Hawk candies from Dunmore. And there are so many more. I am proud to spotlight the best of Pennsylvania in the Candy Desk.”

Here's a list of senators who have held the Candy Desk and when they assumed the role:

2009: George LeMieux and Mel Martinez, both from Florida