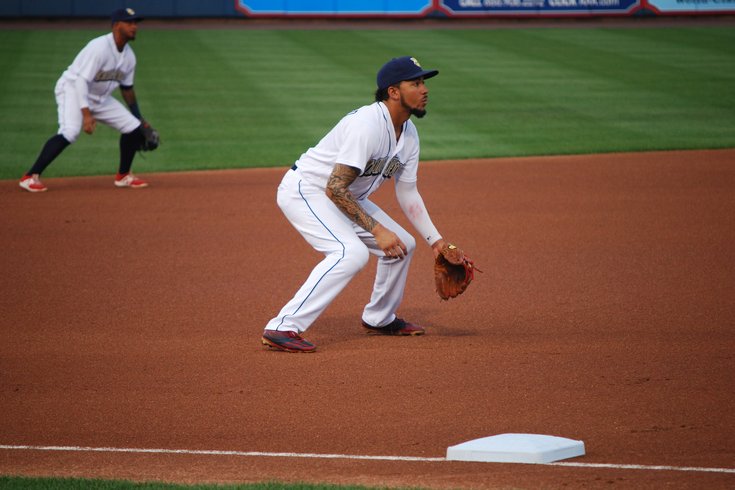 ALLENTOWN – About three hours before the first pitch was thrown at Coca-Cola Park, and before regular pregame infield and batting practice got underway, the top two position player prospects in the Phillies farm system were the only two players on the field.

And they were both in unfamiliar spots.

J.P. Crawford, the former first-round pick who didn’t play anywhere other than shortstop as a professional until this week, made the double play pivot from the other side of the bag as a second baseman. Scott Kingery, the former second round pick who has risen through the system quickly as a second baseman with power and speed, made the throws to Crawford from third base on Tuesday afternoon.

The two began their early, extra infield session taking every kind of ground ball imaginable – routine balls, ones down the line, ones to charge in for, scalding hot ones hit from a fungo about 40 feet away – from third base.

“I think any time you can play multiple positions it opens up more opportunities for you,” said Kingery, who has made all 297 appearances in the field since being drafted as a second baseman in the last three years. “And I know a lot of guys have made their big leagues debut at different positions, like Rhys (Hoskins). I heard something about Freddy Galvis and Cesar (Hernandez) both came up in different positions than they’re playing now.

“So being able to play multiple positions opens up a spot. If someone goes down, you can fill in and play that position even if it’s not your normal position. You can hop in and get your first taste of the big leagues that way, even if down the road that’s not where you’re going to end up at. But it does give you an opportunity.”

And that’s really all it’s about.

The Phillies’ brass isn’t trying to take their top two hitting prospects and force them into new, unfamiliar spots for the long-term because Freddy Galvis and Cesar Hernandez, who many fans have pegged as inferior players, are on the current big league team.

It just increases the team’s options not only for September, when Crawford could get a look in the big leagues, but also in 2018, when all four players are still likely to be in the organization. Galvis is scheduled to become a free agent after the 2018 season.

But if the Phillies begin to lose patience in Maikel Franco (who is last among qualifying MLB third baseman in WAR and OPS) or explore trades involving Hernandez, Galvis or Franco this winter, the fact that Crawford or Kingery could play third base or Crawford could jump to second base (again, most likely on a temporary, one-year basis) just increases the team’s options.

It’s no different than Hoskins getting his first MLB opportunity in left field (and making the most of it) while the team still evaluates first-year starter Tommy Joseph at first base in the season’s final six weeks. It would be hardly surprising to anyone if Hoskins is the 2018 Opening Day first baseman.

Crawford has handled his chances at third without a problem in first three days at third base at Triple-A Lehigh Valley this week. Given how his bat has woke up in the last 2 1/2 months (and the fact that he has to be added to the 40-man roster in a couple of months) it would hardly be surprising to see him get a look in the big leagues when rosters expand in September, similar to Jorge Alfaro and Roman Quinn at the end of last year.

As Kingery pointed out, both of the Phillies current middle infielders broke into the big leagues in unfamiliar spots.

Back in 2012, Galvis was the team’s Opening Day second baseman (since Chase Utley was battling knee issues and Jimmy Rollins was at shortstop) despite never having played the position until the previous month in spring training. A year later, Hernandez made 22 of his first 29 big league starts in center field (Utley was back from the DL as the team’s regular second baseman).

And this isn’t strictly a Phillies philosophy to try young players at new positions as they’re on the cusp of the big leagues.

Former Orioles first-round pick Manny Machado was a top shortstop prospect who transitioned to third base three years into his pro career because Baltimore valued J.J. Hardy’s work at the big league level at shortstop. Justin Turner was basically a utility, jack of all trades infielder when he broke in with the Orioles and Mets in 2009 and 2010 after working predominantly as a second baseman in the minor leagues. During his first full season with New York in 2011, Turner started 71 times at second, 31 and third …. and now, six years later, he’s leading the league in hitting and the starting third baseman on the team with baseball’s best record, the Los Angeles Dodgers.

But Kingery and Crawford didn’t even have to do a whole lot of research to find examples like this or in recent Phillies history. Sharing the field with them on Tuesday night in Allentown was Washington Nationals shortstop Trea Turner, who is on a minor league rehab assignment with Triple-A Syracuse this week. 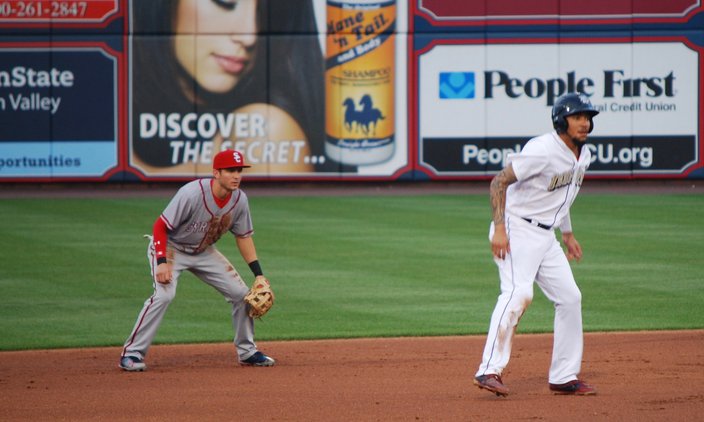 Nationals shortstop Trea Turner is on a rehab assignment with Triple-A Syracuse this week. Turner, like J.P. Crawford, was asked to learn a new position as a top, 22-year-old prospect just a year ago.

Just last summer, a 22-year Turner was asked to learn second base and center field after starting his first 161 professional games before last year as a shortstop (and his first 47 of 49 starts last year at shortstop, too). Turner made just six starts in center in the minor leagues in late June before being called up to Washington, where he became a Rookie of the Year candidate and the Nats’ regular center fielder in the season’s final six weeks.

Last year, Washington valued Danny Espinosa’s glove at shortstop and had an opportunity in center, where Michael Taylor and Ben Revere had shared time. But in the winter, Washington traded Espinosa after acquiring center fielder Adam Eaton in a trade, opening up Turner’s natural position, shortstop, where he started on Opening Day.

The more positions you can play, the more opportunities you'll have regardless of the end game.

“I started taking ground balls on my own over there and at second just to show them I could play other positions,” Crawford said of his late-season tutorial. “And then it got brought up, (Lehigh Valley manager) Dusty (Wathan) brought me in, said he wanted to start playing me at third and second these last couple of weeks. I said, ‘Let’s do it.’”

While Crawford’s first opportunity in the big leagues comes at a new position next month, Kingery’s near future is a little less clear.

He doesn’t have to be added to the 40-man roster this winter, which could delay his MLB debut until early 2018. With Cesar Hernandez holding his own (.285/.369/.405 with 10 home runs and 17 stolen bases in the last 365 days) that might be OK while the Phillies sort through their current, crowded infield anyway.

Kingery may or may not get a start in the next two weeks at third base. But it could come if he plays winter ball this offseason.

It should be noted that, although he hasn’t been asked to start shagging fly balls just yet, Kingery worked as a center fielder as recently as 2013, his sophomore year at the University of Arizona.

“I’d play wherever they need me to,” Kingery said. “If they want to throw me in the outfield, I’d happily play out there for a couple of games.”