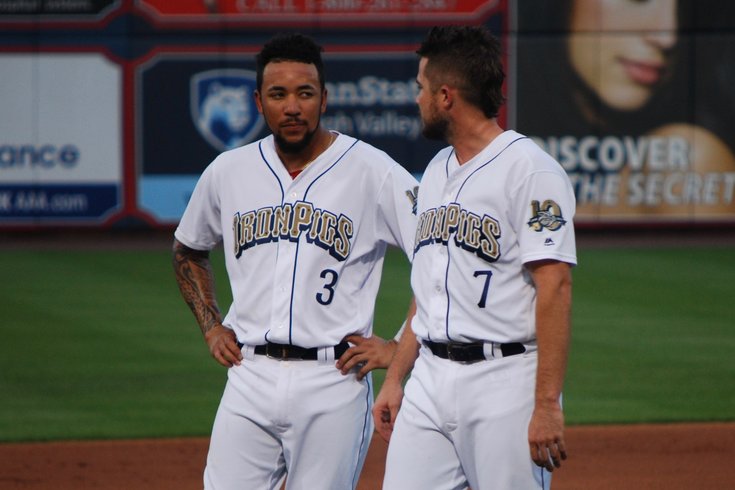 J.P. Crawford was ranked the third best prospect in all of baseball by Baseball America last July. A year later, their harsh criticism has helped fuel him to a monster second half that has him on the big league radar.

ALLENTOWN – Had it been a month or so earlier, J.P. Crawford probably would have grounded out weakly back to the pitcher or hit a foul ball straight up the third base line for the third out of the inning, squashing a rally.

But five weeks ago at Coca-Cola Park, everything was already going his way after a brutal first calendar year in Triple-A. And so instead of a harmless third out, Crawford teed up a pitch from Gwinnett right-hander Kris Medlen and hit it about 400 feet, off the wall in center.

And then Crawford attempted to score, too, but look like a dead duck between third base and home. Until he pulled the slickest of slick moves, slowing up at home plate to pretend like he was giving up to be tagged out, only to quickly drop into a slide and through the legs of catcher David Freitas to put the perfect bow on an improbable inside-the-park grand slam.

“I’m still tired from that run,” Crawford joked at his locker stall five weeks later, prior to Tuesday’s game against Syracuse.

“I don’t know, I saw (Brock) Stassi a couple innings earlier, and the catcher just tapped him,” Crawford said. “So I saw him keeping his glove up there and tried to do something, you know?”

this is the best part about Crawford's inside the park grand slam. he fakes like he is accepting of being out then drops for a slide. safe. pic.twitter.com/KUG4VOSvHi

Crawford has been doing a lot of things lately. His turnaround in the last 2 1/2 months, following a dreadful first two months of the 2017 season, is as unpredictable and remarkable as his nifty slide on last month’s slam.

And it’s led him to follow Rhys Hoskins’ path of learning a new position in the last full month of the minor league season (for Crawford, third base) in order to increase his versatility in the event of the big league call-up next month.

It’s no secret that Maikel Franco has struggled as the Phillies regular third baseman this season (his .664 OPS and -1.2 WAR both ranked 21st out of 21 qualifying big league third baseman entering Tuesday night) and the Phillies are in no hurry to move Freddy Galvis from shortstop, where he will likely be a Gold Glove finalist for a second straight season and entered the 2017 season with the goal of starting all 162 games, something Pete Mackanin is trying to help him achieve.

Phillies general manager Matt Klentak told reporters Tuesday the Crawford move is a temporary one (again, not unlike Hoskins) and that it was not a message to Franco. Since Galvis is a free agent after 2018, there is still a long-term vacancy for Crawford to fill at shortstop.

I mean, [a guy] from Baseball America thinks they know what they’re talking about – I just have to go prove them wrong. I mean, I’ll let my play do the [talking] and go from there.

But entering this summer, some began to question if Crawford would ever become that guy and live up to the hype he quickly achieved as a fast-risking former first-round pick. Some wondered a little too loudly for Crawford’s taste, even.

Some background: Crawford was ranked as the 6th best prospect in all of baseball according to Baseball America entering the 2016 season. He had been considered the top prospect in the Phillies system since Franco graduated to the big leagues (read: a long time ago).

But then in early July of this year, when Baseball America’s 2017 midseason Top 100 rankings came out, Crawford dropped nearly 80 spots, to 92nd, and the publication’s editor, John Manuel, told CSNPhilly.com's Jim Salisbury they considered omitting him altogether.

“We don't see him as an impact player anymore,” Manuel told CSN. “Just more of a high-floor, solid regular than a guy who could be a building block. I think that's fair.”

Since those humbling Baseball America rankings were published last month and their editor’s assessment of Crawford ran on July 12? Crawford has slashed .306/.390/.549 with seven home runs, eight doubles, and three triples in 144 at-bats over his last 37 games.

All it is is motivation..

When asked if something “fired him up” recently – Crawford sent that not-so-cryptic tweet the day Baseball America's criticism ran on CSNPhilly.com – the IronPigs shortstop/third baseman was honest.

“People thinking that I’m not good anymore,” he said. “I mean, (a guy) from Baseball America thinks they know what they’re talking about – I just have to go prove them wrong. I mean, I’ll let my play do the (talking) and go from there.”

Its seems to be working, J.P.

“It lit a little fire under me to keep going,” he said. “I was struggling. But I was putting the work in every day and I knew the results were going to come.”

Was it particularly unflattering that all of the prospect love came crashing down so quickly from the people that were doling out the love? Crawford was ranked the third best prospect in baseball by Baseball America in their 2016 midseason rankings.

“I could care less about all of that,” Crawford said. “Saying I’m not an impact player anymore, all of that stuff. It fired me up a little bit.”

And so now Crawford is making an impact, almost nightly. On Tuesday, he followed up Scott Kingery’s leadoff double in the first inning with a run-scoring hit to give the IronPigs a 1-0 lead.

“Everyone has a way to get motivated, and if that was it, then I’d like to thank you guys,” IronPigs manager Dusty Wathan joked with reporters Tuesday afternoon.

But back to the sheer madness of Crawford’s 2017 season.

Crawford has more extra-base hits in three weeks this month (eight, including three home runs) than he had in season’s first 10 1/2 weeks (seven).

“You know sometimes things click, sometimes, I don’t want to say he was playing through an injury, but he was nagging, the leg thing was nagging and he was trying to play through it,” Wathan said. “I think maybe he was trying to do too much at times. He was a little bit passive when he got ahead in the count. Now he’s really confident and he gets himself in hitters counts a lot and he’s being aggressive with his swings, instead of just trying to get a hit he’s trying to drive the ball and do some damage with balls. I think it’s a combination of a bunch of things.”

Crawford sat out nine straight games from June 11-19 with a groin injury but admitted it was just as much of a mental reset.

“The time off gave me some time to clear my head,” Crawford said. “To relax and take a deep breath.”

And now Crawford is relaxed. And confident. And trying to ignore any lingering critics as he tries his hand at a new position in hopes of making his major league debut next month.

“Whatever helps me get up there fastest,” Crawford said. “I don’t care where I play. As long as I’m up there, that’s all I care about.”

Crawford handled his first couple of chances at third base without issue on Tuesday night.