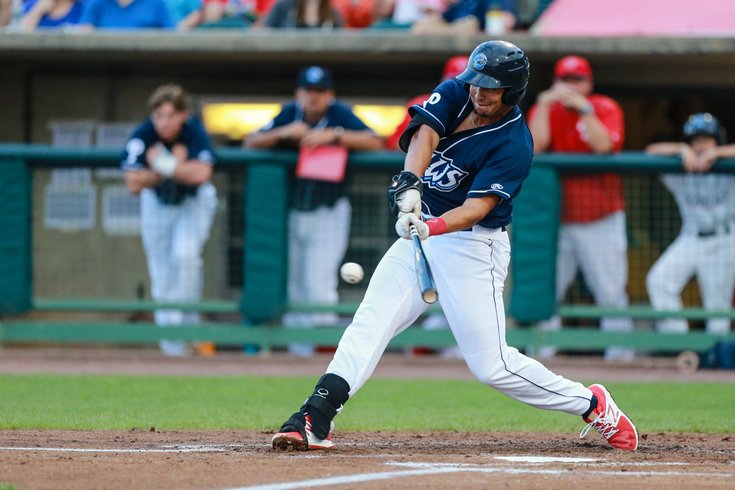 The light jab inside the home clubhouse at FirstEnergy Park in Lakewood, N.J., came from Austin Listi, the 23-year-old who has hit 29 home runs in 101 games between Low-A Lakewood, short-season Williamsport, and Dallas Baptist University in a busy 2017 baseball season.

The most memorable of those Listi home runs, at least inside the BlueClaws clubhouse for four members of the Phillies’ South Atlantic League affiliate, was hit two months ago, on a hot and humid day at Texas Christian University, where Dallas Baptist was matched up with the University of Virginia for the second time in three days in the NCAA Regionals.

Back in Lakewood, two first-year BlueClaws celebrated from afar. Like Listi (17th round pick in 2017), both first baseman Darick Hall (14th round, 2016) and outfielder David Martinelli (6th round, 2016) are both products of Dallas Baptist.

“It’s funny – those three picked me up (at the airport) at like 12:30 today and we went and got food,” Haseley, the Phillies first-round pick this summer, said when he joined Lakewood on Tuesday. “I didn’t know they were all Dallas Baptist until I got in the car, it was pretty funny.”

All three played in the same Patriots lineup last spring. In the 2016 team’s penultimate game, Listi hit third, Hall fourth, and Martinelli eighth. A fourth member of that lineup, shortstop Cam Duzenack, was also drafted by the Phillies in 2016 (23rd round), but opted to return to Dallas Baptist and went to the Diamondbacks in the 9th round in this year’s draft.

“We were all at the beach yesterday, in the water, and we were saying, ‘Think about it, the three of us played college ball together and then the blink of an eye we’re on a beach in New Jersey on the same pro team,’” Listi said. “What are the chances? It’s cool.”

“That’s something that just doesn’t happen,” Hall said. “It’s a luxury you usually don’t have at this level.”

Of the trio of former Patriots currently in BlueClaws’ clothing, no one has made quite the splash that the 6-foot-4, 236-pound, lefthanded-swinging Hall has in his first full pro season.

Hall, who turned 22 three weeks ago, entered play on Thursday hitting .267 with a .336 OBP, 24 home runs, and 27 doubles in 103 games in the Sally League. He leads the league in home runs and, with one more in the BlueClaws’ next 18 games, will overtake Jose Pujols’ Lakewood franchise record for home runs in a single season.

“He’s the MVP of this team and the MVP of this league, in my mind,” Lakewood manager Marty Malloy said. “Look at his numbers. He’s leading the league in five offensive categories. Go down the line, home runs, RBI, slugging percentage, (total bases). He’s hit fourth, and at times he’s kind of taken this young group, he’s a college kid but he’s not old either, but he’s kind of taken these kids on his shoulders in certain games and helped us get to where we are.

“And this isn’t an easy ballpark to hit in. We call in Yellowstone National Park. Everybody laughs when we say that. But when you go to other places and then play here, it’s a big difference. So his numbers, they’re legit, they truly are.”

Hall has also struck out 100 times (while walking 27 times), but that’s not uncommon for a young slugger. Fellow Arizona native Dylan Cozens struck out 147 times in 132 games at Lakewood in 2014.

Entering Thursday, the Phillies farm system had a home run leader in three of the five leagues they have a team playing:

*Hernandez is tied with two others for league lead. Also worth noting: Reading's Mitch Walding is two HR behind leader in the Eastern League, and Jhailyn Ortiz and Cole Stobbe are both one HR behind the leader in the New York-Penn League.

Perhaps the most impressive numbers for Hall is how he’s managed to keep his production going late into the summer, which is often a chore for young players in their first full seasons of pro ball. After slashing .252/.303/.442 in the season’s first two months, Hall has slashed .279/.359/.598 with 17 home runs and 19 doubles in 61 games since June 10.

“Going into your first season, you don’t have any idea what to expect,” Hall said. “I think as a young player, kind of inexperienced, you don’t know what you’re going to have to do to keep yourself going. I think early, you kind of put too much energy in it. And as a player you need to find a level you want to be at, because early in the year you have to take yourself down because you’re excited. And then it transitioned, from trying to get yourself down to getting yourself up. … It’s a little bit tougher, but it just comes from playing, and growing as a baseball player.”

Hall said another key has been learning to recognize off-speed pitches. The mental repetitions in the middle of the lineup have helped him adjust.

“You get a heavy diet of them in the middle of order, and when you’re seeing them over and over and over again, you just kind of learn,” Hall said. “They say it takes so many at-bats before you can get to the big leagues, so it’s all a part of the learning curve and the learning process. As a hitter, every year you should come away with something. So that’s something I’ve learned to handle a little better.”

The Lakewood BlueClaws are currently home to each of the Phillies most recent first-round picks, Haseley and 2016 first overall selection Mickey Moniak. But both are currently outnumbered by the Dallas Baptist bats in the clubhouse, including the most consistent stick in the middle of Malloy’s Sally League lineup.