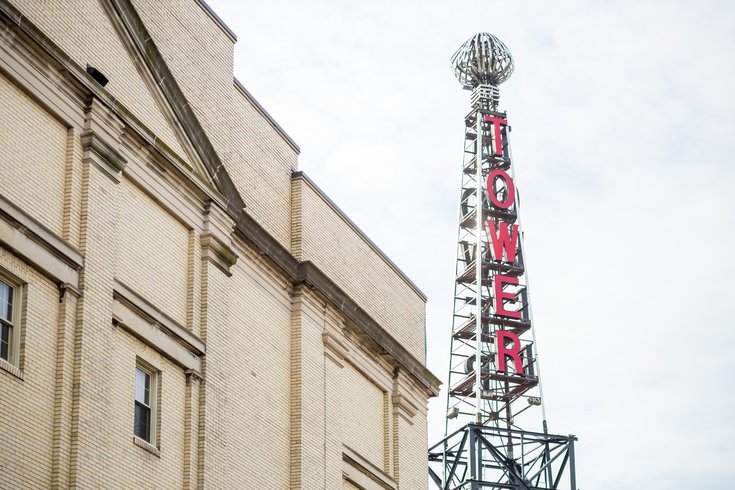 The spire atop Tower Theater in Upper Darby, Delaware County, seen above in a file photo, is being taken down. Crews began removing the landmark structure Tuesday, Aug. 13, 2019, because of concerns about the safety of the structure.

Nothing gold shall stay.

When it comes to the Tower Theater – the iconic music hall on 69th Street in Upper Darby – many probably remember the favorite shows they attended there. (Mine was the Marilyn Manson show a few days before Halloween in 2003.)

When it comes to the exterior, though, most passersby will remember the famous TOWER letters and sphere atop the 92-year-old tower reaching skyward from the arena.

Well, that will be confined to their memory banks after Tuesday, when safety concerns about a potential collapse led to its removal.

According to CBSPhilly, general manager Trenton Banks said the decision was made because “the safety and well-being of our guests is our utmost concern.”

“In light of the sign’s age, structural integrity and significant public safety concerns voiced by our independent engineering firm and other experts, a decision was made to remove The Tower sign atop the venue,” Banks told the station. “Once the sign has been taken down, we plan to explore all options to potentially refurbish the signage.”

On Tuesday morning, Upper Darby Mayor Tom Micozzie shared that Live Nation, which owns the Tower, told him that the removal process was set to begin that morning, which it did.

“When the company first approached the township to request the necessary permits, I expressed my strong concern about the removal of the sign, which has become a landmark for 69th Street,” Micozzie wrote in a Facebook post. “However, an independent analysis by the township's engineers confirmed that severe deterioration of the metal base and structure could not be corrected and posed a hazard to public safety.”

He also noted that the sphere and letters from the sign will be donated to a music museum, but no further details about that were available Tuesday afternoon.

Despite the sadness of yet-another iconic structure disappearing from the region, the Upper Darby Police Department was able to find some humor in the situation.