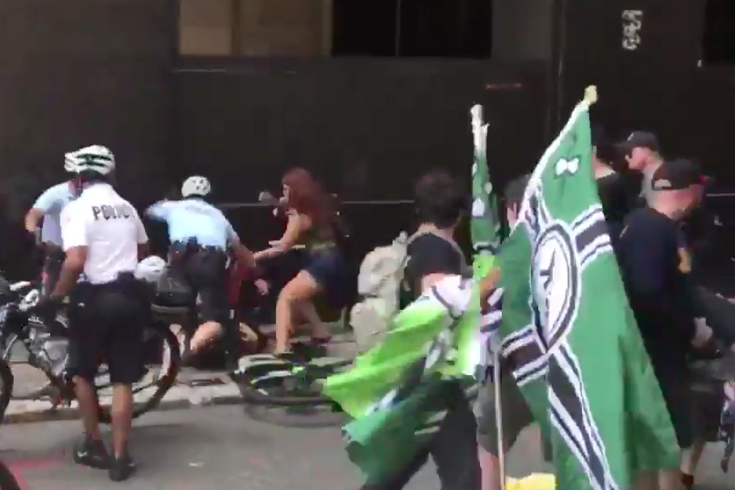 A screen grab from video taken at a Sunday afternoon fight after pro- and anti-Trump marchers met near Tir na Nog Bar and Grill. Three people were arrested, including the son of a Philadelphia public school teacher.

The aftermath of this weekend’s arrests related to the pro- and anti-Trump rallies has reached the School District of Philadelphia.

When the names of three people charged in connection with a skirmish involving protesters, Trump supporters and police officers were released, one set off an avalanche of online criticism directed toward one of their fathers.

According to a police account of the incident, 33-year-old Christopher Sheerin “was seen punching a Trump supporter (31/W/M) in the face and pulling the American flag from him.”

Before long, accusations were flying on social media, in articles, and via email claiming Sheerin’s father John was a member of Antifa and a principal at a Philadelphia public school.

John Sheerin is not a principal in the school district. He’s a teacher.

He didn’t immediately respond to requests for comment on the online backlash, so we were unable to discern if he is, in fact, a member of the group. Screen grabs, however, show John Sheerin inviting his critics to report him to the school district, and criticizing the Trump supporters who responded to him.

He also posted extensively about his son’s arrest on Facebook. 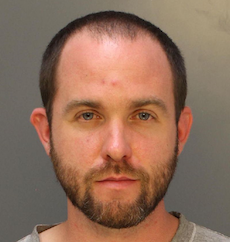 On Monday, he shared that Chris had been arrested after the Impeach Rally and was still being detained a day later.

“Chris has a heart condition and has been without his medication for over 24 hours,” he wrote. “I'm on my way to the 9th Police District to make sure that my son is OK, and has his medication. If it takes getting arrested inside the 9th District to check on my son, so be it. I just want everyone to know where I am!  #RESIST”

Three hours later, he posted that the trio arrested had been released from custody, followed by a statement explaining his take on the arrest.

“Just received a new video that shows a small Antifa woman (Trump protester) grabbing a Nazi-motif flag from a white supremacist,” he wrote. “This overweight guy tried to grab the flag back and also pushed and grabbed the girl.

“At this point, my son tried to protect the girl, and was instantly thrown to the ground by the police and arrested. He clearly assaulted no one, and the guy who clearly assaulted the girl was able to walk away, as were all of the Trump supporters. The cops who filed these charges may want to reconsider.”

The video below was taken at the incident that led to the arrests:

Chris Sheerin is scheduled for a July 18 court hearing, and his father didn’t immediately return a request for an interview. (If we hear back from him, this story will be updated.)

"We are aware of this and are looking into the matter," said H. Lee Whack Jr., spokesman for the school district.