The apology-allergic man-baby disgraces himself, and a nation, by tripling down on Khan family criticism 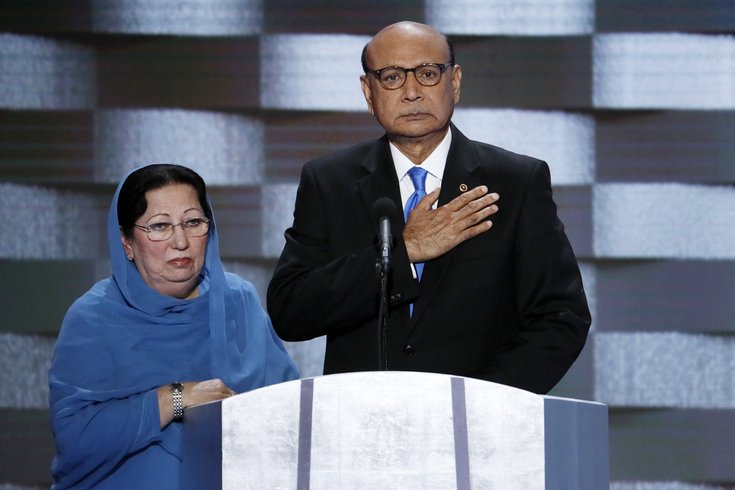 Khizr Khan, father of fallen US Army Capt. Humayun S. M. Khan, and his wife Ghazala speak during the final day of the Democratic National Convention in Philadelphia on Thursday, July 28, 2016.

After watching Khizr Khan deliver his Thursday night speech at the Democratic National Convention about his son Humayun’s heroic death, the reaction simply boiled down to this: It was the most effective takedown of Donald Trump I’d ever seen.

There was the father of a fallen soldier – wife somberly and painfully standing by his side – speaking from the teleprompter-less heart about patriotism and bravery, and loss and grief.

They were American Muslims hearkening back to their life’s greatest pain and pride, knowing their son gave his life to protect others, couched in the setting of a country where a reality-TV-star-cum-presidential-candidate doesn’t say very many nice things about their kind.

The moment initially got lost in a frenzy of emotion as Hillary Clinton accepted the Democratic Party’s presidential nomination shortly thereafter. But the moment would soon overshadow any positive push coming from that historic accomplishment.

Trump being Trump – a spoiled, obnoxious, apology-allergic man-baby who relied on “bone spurs” to avoid draft-era military service – proved again that he’s emotionally and intellectually ill-equipped to acknowledge the anger-infused grief of those who questioned him. It's as if he's built a wall to keep empathy from penetrating his orange-hued skin.

In the days after that compelling speech, during follow-up interviews or tweets, Trump suggested the late Khan’s mother didn’t speak because of the candidate’s perverted view of Islam, that the speech was written by Hillary Clinton’s campaign and, in true kindergarten-playground butbutbut he started it form.

Not only did that force Gold Star parents to relive their pain for the cameras in the name of defending their honor when it should never have been questioned in the first place, but it further exposed Trump as a quote-unquote man whose temperament should disqualify him from winning the presidency of a local Better Business Bureau committee, let alone the nation.

But this being America amid the most tumultuous election season of many of our lifetimes, the issue slid right into the sweet spot of divisiveness, with people who want to believe anything Trump says taking his side, leaving people who believe in empathy and dignity more aghast than they already were.

That’s really saying something for many of us who see Trump for what he is (a punk who got rich thanks to a loan from his daddy), and find the fear-mongering he’s used to consolidate power horrifying enough to lose respect for those who buy into it.

That Donald Trump thinks it’s OK to get into a spitting match with a pair of mourning parents is among the most reprehensible things to come from this election season.

Making it all the more worrisome are reactions from people who seem to think it’s OK to suggest the Khans should be investigated for imaginary, unsavory ties, or that the media should focus on immigration policy instead of the Khans’ pain, or in true kindergarten-playground form, hearken back to the reaction to the mother of a Benghazi victim speaking at the Republican National Convention in butbutbut they did it first fashion.

It would have been easy for Donald Trump to take a pass on this one; instead, he decided to attack and claim the sacrifices he’s made as a businessman are somehow comparable to the sacrifice the Khan family made.

That right there is why people should think they’ve seen the worst of Donald Trump, or the worst of this election cycle. But know this: It not only can get worse, but it most definitively will. Probably on a weekly basis.

That makes him dangerously unfit to lead a country established on the notions of liberty and justice for all.

It is reprehensible for sentient beings to let this one slide, no matter how much they dislike Hillary Clinton.

Should Donald Trump get elected president, America will cease to be the country it once was. Instead, it will be a land ruled by fear, anger and mistrust, on international, national and even neighborly levels.

If Donald Trump is willing to challenge the grief of parents who’ve lost a child, nothing is sacred to him.

If you’re willing to elect that quote-unquote adult as the 45th president, you’ll have nobody to blame but yourself for the demise of a once great nation.

Shame on him and, if you still support his quest for power, shame on you, too. This country is teetering on the brink, and you're about to push it over the edge.