President Donald Trump's South Florida club suggested on social media Friday that residents should relieve their "post-hurricane stress" at the resort's restaurants in the wake Hurricane Irma, which left more than 30 people dead and laid waste to many communities in the region.

Trump National Doral Miami, which is owned by the Trump Organization, the holding company Trump has entrusted to his two eldest sons while he is president, said in a tweet: "Nothing relieves post-hurricane stress like great food! Our restaurants are open to the public." 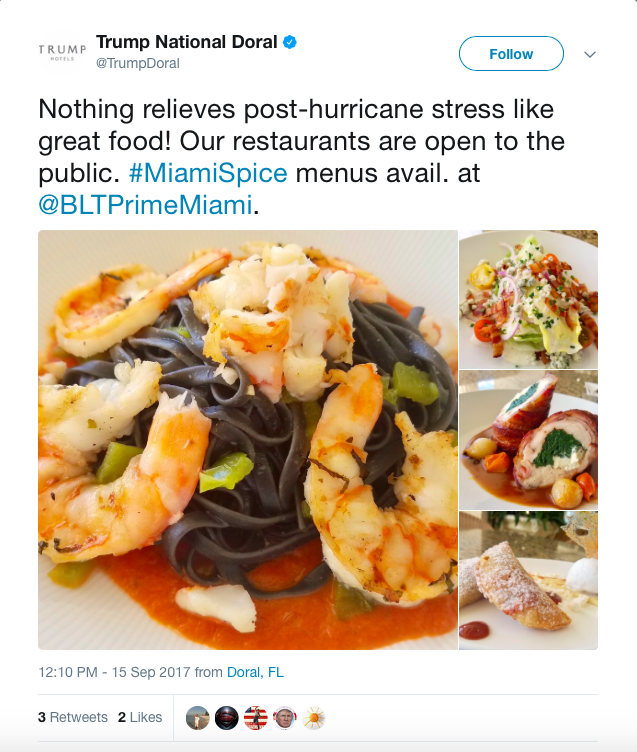 Considering the devastation Irma brought to Florida, many replied to the tweet, calling it tone deaf and in bad taste. Others simply expressed bewilderment at the post.

a world beyond parody pic.twitter.com/Uyu7YYgmjc

Stressed because you maybe lost everything? MAKE YOUR WAY TO TRUMP NATIONAL DORAL!

What an absolutely insensitive, shameless bit of self-promotion. You truly deserve to wear that Trump brand until your eventual bankruptcy

How is this real

The Miami New Times reported that the Doral club made out well during Hurricane Irma, selling out all of its rooms – for rates between $200-500 per night during the storm – by Wednesday before the powerful storm struck.

As the newspaper noted, while President Trump put his sons Eric and Donald Jr. in charge of his businesses temporarily, he still owns all of his properties.