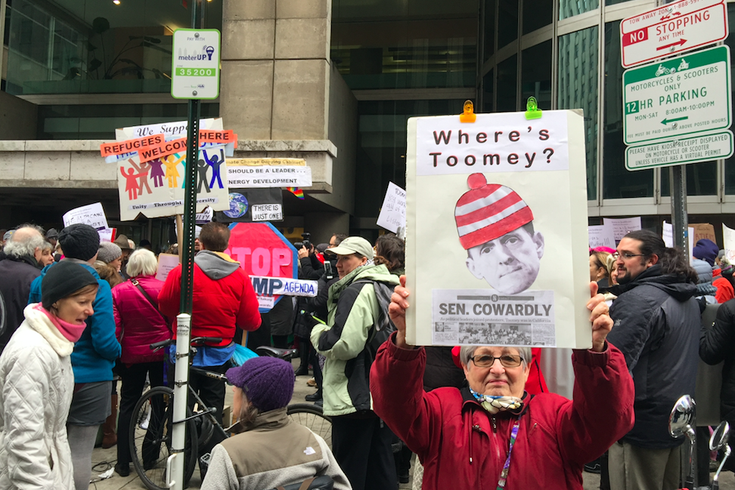 Terry Baraldi of Lansdowne has been to numerous Tuesdays With Toomey protests in Center City.

What started as a group of fewer than a dozen women in November has gradually morphed into a weekly event that drew hundreds of protesters outside the Center City offices of U.S. Sen. Pat Toomey on Tuesday.

Their mission, according to organizers, is to have their voices heard by a legislator they say refuses to listen to them.

On Tuesday, droves of sign-waving protesters clogged the sidewalks along the 1600 block of JFK Boulevard, forcing police on bicycles to block two lanes of traffic to protect the overflow crowd.

Various speakers took turns on a microphone to talk about this week’s focus – “asking Senator Toomey to support women, transgender, and low income constituent’s health by voting no to an Affordable Care Act repeal without offering a viable replacement.”

Tuesdays With Toomey regulars collected hand-written letters from the crowd, and those correspondences were delivered – with the Philadelphia Police Civil Affairs Unit acting as intermediaries – to Toomey staffers inside. 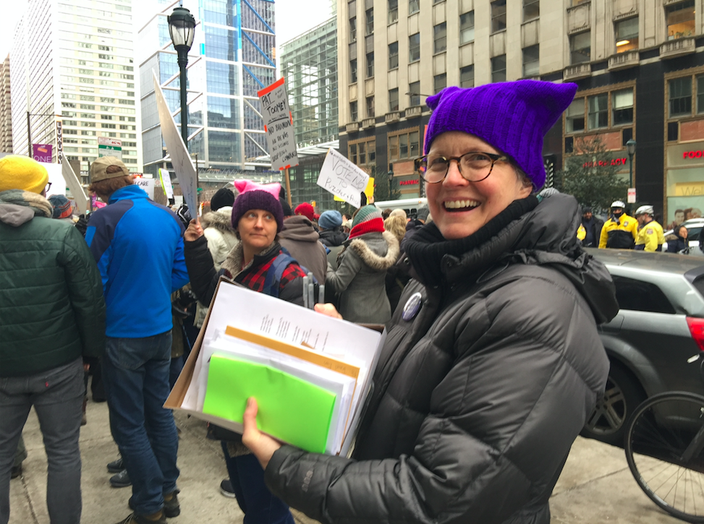 Tuesdays With Toomey organizer Angela York-Crane holds one of three boxes of letters that protesters had written to U.S. Sen. Pat Toomey before this week's protest in Center City.

Among the sign-toting regulars was Terry Baraldi of Lansdowne, Delaware County. This week, she held a sign that read “Where’s Toomey?” and featured a photo of the senator donning a “Where’s Waldo?” cap above a banner headline that read, “Sen. Cowardly.”

“I’ve been here every Tuesday,” she said. “It’s phenomenal to see how we’re getting a lot of new people here each week.”

As the 12:30 p.m. protest commenced, Tuesdays With Toomey organizer Angela York-Crane said three boxes filled with letters made their way into the senator’s office.

She noted the group has grown exponentially from its humble roots. At first, the growth was marginal. Then, the first time ACA was their focus, they drew roughly 150 protesters. Tuesday's was the biggest yet, she said.

Among this week’s protesters was Rodney Anonymous, a Philadelphian best known as the lead singer of punk band “The Dead Milkmen.” He works right around the corner, so attendance is not only convenient, but incumbent upon his sensibilities. 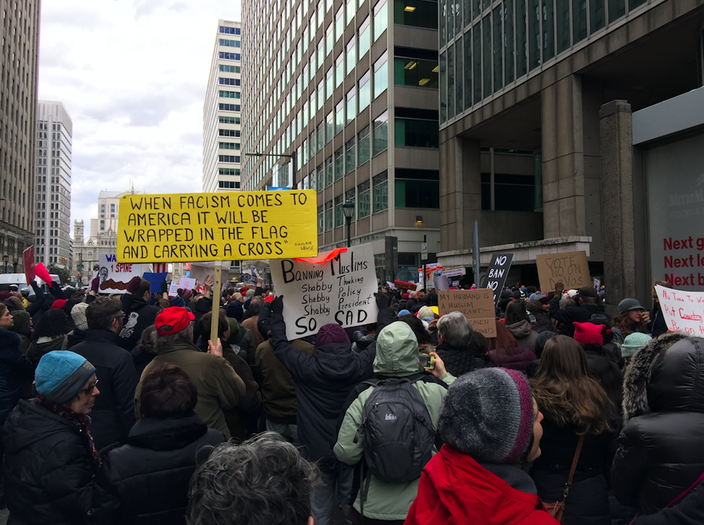 Hundreds of protesters flocked to U.S. Sen. Pat Toomey's offices in Center City on Tuesday to make their voices heard on issues including, but not confined to, the Affordable Care Act.

He was asked whether any ties can be made between this group and punk sensibilities.

“I don’t know if it does, but it just feels necessary,” he said. “They probably thought we’d suffer fatigue (and stop protesting). That’s not what happened at all."

While interactions between the group and senate staff were initially cordial, that’s not the case anymore, York-Crane said.

“They’re not polite anymore. They’re not willing to see us, ducking us every week. We’ve gotten no real response whatsoever,” she said, noting the “doors are preemptively locked to keep constituents out.”

Despite the not-exactly-cordial relationship, the group will return next Tuesday.