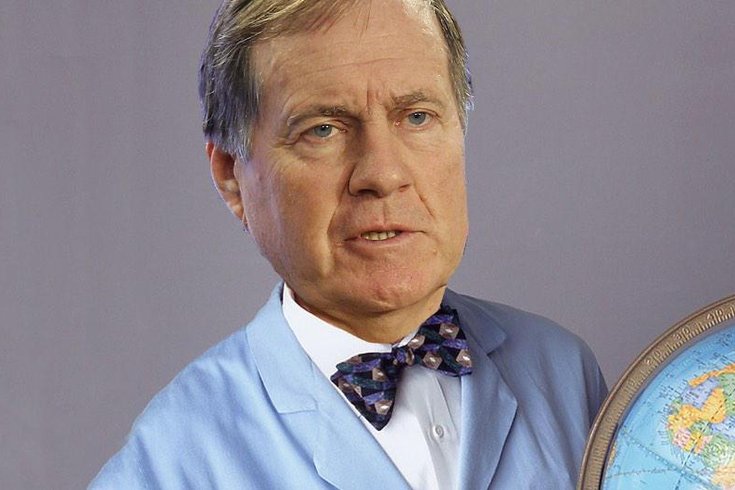 When Bill Belichick called an impromptu press conference Saturday to further discuss what has now become known as "Deflategate," people all over the country tuned in to hear what the Patriots coach had to say. Naturally, those people then took to twitter to parse every word and, more specifically, mock every reference to "balls."

What people weren't expecting was a science lesson.

Here's a look at some of the best reactions:

"It's a sensation for the quarterbacks" -- Belichick on feeling the balls.

"I've handled dozens of balls over the past week" -- Belichick

how long do you think Belichick has had to practice these lines to get to a point where he wasn't just giggling constantly?

So for the record, Belichick is blaming the officials, the equipment team, the weather... anyone else?

A similar concept to when the "low tire pressure" light comes on in your car. BILL BELICHICK IS ON FIRE

Is Belichick going to end this by saying: "And live from New York ..."

“I would not say I’m the Mona Lisa Vito of the football world.” Belichick dropping My Cousin Vinny!!!

“I’m not a scientist.” - Bill Belichick

Belichick walks out of presser, into lab. Brady hands him set of goggles and white coat. They share a laugh, deflate just a ton of footballs

A live look at the Belichick press conference. pic.twitter.com/km9UdACJaf

I will never see my dashboard tire pressure light go on again without thinking of Bill Belichick, and this afternoon. That's my takeaway.

Still no explanation from Belichick as to how the laws of physics don't apply to the Colts' footballs.

Press guy just told media that all "sophomoric references to balls will be replaced with footballs" in the transcript of the conference. Ha!

DID YOU ORDER THE CODE RED BELICHICK

He "followed every rule". Now can he follow his heart? Coming this summer, Bill Belichick and Marisa Tomei star in "Fourth Down and Love"

Belichick confirmed today what many of us already suspected: He would CRUSH trivia night.

That Belichick press conference was far more entertaining than the AFC Championship game.

I’m really hoping the NFL’s investigation is eventually released in this format: pic.twitter.com/JZxy4DbDSM

There's a legitimate chance Belichick is president now. I need to double check the Constitution but I'm like 99% sure.

Belichick leaving the hoodie at home and going with this look for Super Bowl: pic.twitter.com/ZelQoLllUc

Then there was a that headed exchange with "Tom"

How many times can Belichick murder @tomcurran in 1 one press conference?

Belichick vs. "Tom", Hell in a Cell

And this is just the best...

My own kid just texted, "Hope you enjoyed that roast session Bill gave you..."

And now for some that were slightly more serious:

Belichick: I believe now, 100 percent, that I have personally and we as an organization, we have followed every rule to the letter.

The real message from the press conference, other than Belichick could be your college physics professor: Go try to prove we did it, NFL.

I credit Bill Belichick with taking issue seriously, for obviously spending time usually devoted to SB prep to educating himself on subject

Lowkey the gem of Belichick presser, was him admitting to spygate and thinking there was absolutely nothing wrong with the taping

Shame on CNN, MSNBC and Fox News for carrying the Bill Belichick conference live. Deflategate has entered a whole new level of stupid.

This whole "blame the media" routine from some Pats fans is laughable. There's a real investigation going on, sparked by a sting operation.

If you've got any suggestions that you think should be added, email me and if they make the cut, I'll be sure to add them.