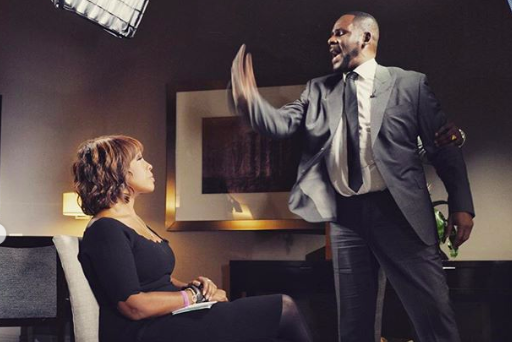 Gayle King interviewed R.Kelly for CBS This Morning on Wednesday.

Kelly, who has been long accused of sexually, psychologically and physically abusing dozens of women and holding some against their wills, tried to defend himself in an emotional sit down with King.

Kelly is facing 10 charges of aggravated criminal sexual abuse filed last month in Chicago. The cases involve four women, three of whom would have been minors at the time of the alleged crimes. He has plead not guilty and is out on bail. The "CBS This Morning" interview with King was the first public statement Kelly has made in years.

The interview got heated, at one point the singer even stood up and said he has been "assassinated" and "buried alive." King is being touted for her interviewing skills, as she remained stoic and composed throughout the entire segment.

At one point Kelly got to his feet and began screaming.

"CBS This Morning" posted a portion of the 80 minute interview on the show's YouTube page. Watch it below.

Twitter had a lot to say about all of this.

When you know they’re lying but you let em tell the story anyway. #rkellyinterview pic.twitter.com/dny1ZuQToE

This picture of Gayle King is a whole mood. #rkellyinterview pic.twitter.com/ULpLolmWF7

This performance wins the award for Best Meltdown While Being Asked Reasonable Questions in an Interview narrowly beating Kavanaugh in a run off. #rkellyinterview

R Kelly isn’t even talking to Gayle so much as he’s talking to the camera. He wants this interview to be another performance. He wasn’t ready for Gayle’s stellar and unflappable style. pic.twitter.com/jxYisuGT1N

Gayle when R Kelly stood up ranting and carrying on #CBSThisMorning pic.twitter.com/zWcIrW1Gvy

I have met with some of R. Kelly’s victims.

The man is lying.

I lost count of the lies he told in this interview with Gayle King. It’s in the dozens of lies.

He is a disturbing sociopath.

The photo of R. Kelly yelling at Gayle King should remind everyone that rape isn’t about sex. It is an act of violence, about power and control.