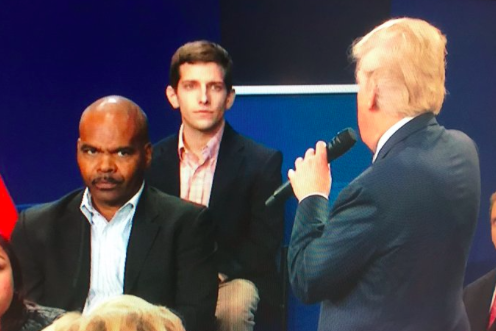 Heading into Sunday night's second 2016 presidential debate at Washington University in St. Louis, all eyes were on Republican candidate Donald Trump in the wake of his offensive comments recorded during an appearance on the set of "Days of Our Lives" for a 2005 cameo.

Political observers and many American voters, including outraged conservatives, have condemned Trump's sexist remarks and questioned whether he can effectively recover from the issue over the final month before the Nov. 8 election.

Twitter was quick to rule on Trump's handling of the barrage of questions served up to him by Anderson Cooper and Martha Raddatz.

.@realDonaldTrump says "he has tremendous respect for women," but his words, actions, and stances on women's rights say otherwise. #debate pic.twitter.com/YpwllE2OTB

Donald just gave all of his answers he had memorized , to the first question

By the end of the debate Trump will wish he had stayed in the locker room.

This #debate is basically a bad episode of Maury

HES SUCH A CHILD HE LITERALLY CANNOT STOP INTERUPTING #debate

Note to self: Do not go into the Locker Room at Trump University.

I'm a Muslim, and I would like to report a crazy man threatening a woman on a stage in Missouri. #debate

Donald Trump in 1999: Hillary Clinton has "been through more than any woman should have to bear" #debate pic.twitter.com/rCjO9Hsvau

Reporter: “Why did you say you touch women without their consent, Mr Trump?”

Comeback of the year #Debates2016 pic.twitter.com/k2CvF3TXxG

It's safe to assume no presidential candidate in US history has explicitly threatened his opponent with a trial if elected. #debate