As Twitter turns 10, see the first tweets of 22 influential Philadelphians

From Meek Mill to Mayor Kenney 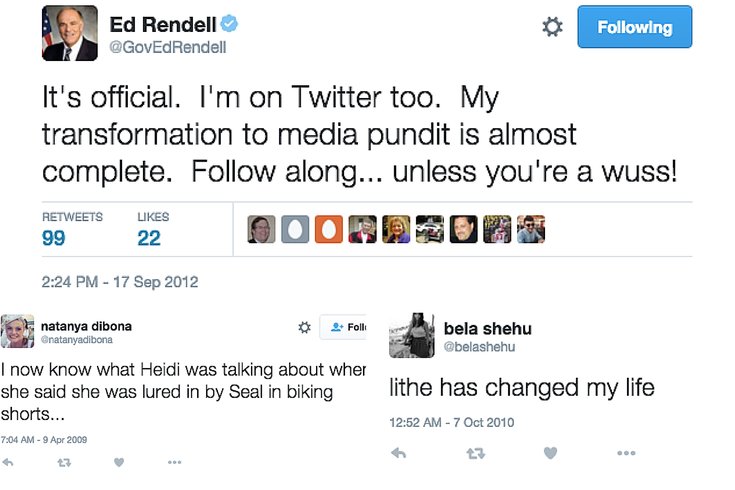 Twitter celebrated its 10th birthday this week, prompting many to harken back to the #FirstTweet tool, launched in 2014, and rediscover what they first said on the platform.

Naturally, we took the opportunity to sleuth for the inaugural tweets of some of Philly's most recognizable people and institutions. Scroll through them below, then search through all your friends' and family's embarrassing first tweets and share them with the world.

It's official. I'm on Twitter too. My transformation to media pundit is almost complete. Follow along... unless you're a wuss!

@mealticket what's up? working my ass off to open sampan!!!

At least it paid off.

6 yrs.ago I got on a spaceship called MYSPACE. Like Kate Mullgrew of the Starship Enterprise i board the SS TWITTER. Greetings, Geeks!

My profile picture is an egg; very fitting twitter.

Get it? Because she's a baker?

It's gonna SNOW, but we will be open ALL WEEKEND!! Forget bread & water, we've got BEER

Fergus Carey: a man who's had his priorities straight since at least Feb. 5, 2010.

Brunch with Matt, Bob and Mike. Really we went to Ruby Tuesdays for the salad bar. I wish Fago De Chao or Chima's was less thant $30

We've all done it.

i have officially entered the 20th century. i mean the 21st.

A warm welcome to you.

lithe has changed my life

Leave me alone @Austin_H2O. I don't want to tweet I just want to eat doughnuts.

Heading to the Acme in South Philly for tasty munchies

Their muffins are pretty tasty.

Senor Octubre just named us his favorite site about prospectively going to the zoo with Roy Halladay!!1

is searching is house for electrical tape

I now know what Heidi was talking about when she said she was lured in by Seal in biking shorts...

Finally setting up my own Twitter. I had so many fakes, decided it was time to make a real one. It's really me. Love-love-love you all!

Well, glad we got that cleared up.

Yes, before there was Cloudamize or Artisan Mobile, there was Boomi. Changing times for a Philly entrepreneur!

If you are powerful & proud then you #aregaytothe10thpower!

Thanks for the heads up.

Did you wear the cap, Mayor Nutter?

Still learning how to work this Twitter stuff but thank god its Friday!