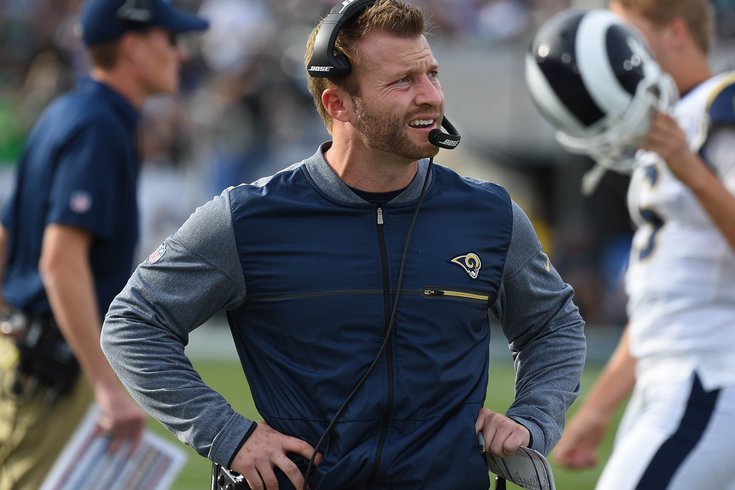 On Monday, CBS' Sean Wagner-McGough released his list of top 10 NFL coaches, which had Doug Pederson landing at ninth, with Rams head coach Sean McVay notably ahead of him, at sixth.

Top 10 coaches in the NFL
(According to @seanjwagner)

I was initially prepared to ignore this bad opinion, because, you know, who cares how this one person views the hierarchy of NFL head coaches? The answer is, a lot of bored people, apparently, as questions about the list flooded my Eagles chat on Tuesday, and I even had to flip the channel away from sports talk radio in my car to avoid it. Hell, even Eagles players started responding to it. I mean, we already covered it, and I'm now writing a second article for our publication about it. But, it's July 1 and there isn't much else to discuss in sports, so whatever.

After getting dunked on for a day or so, Wagner-McGough responded with this:

Eagles fans doing a great job today proving their national reputation is totally unfair and misleading! What a pleasant group of people who definitely wouldn’t ever dare boo Santa Claus!

I have felt the wrath of the hive, too, my friend, but don't resort to one of the most tired references in sports, lol.

• Pederson has a ring, with his side of the ball scoring 41 points in the Super Bowl against the Patriots with a backup quarterback, and a long list of other major injuries. Leading up to that matchup, the Patriots were thought by most to have a huge advantage on the coaching front, to the point where if Pederson were able to simply control his bowels in-game, you could go ahead and chalk it up as a win for him.

McVay, of course, is ringless, as his Rams offense was completely outcoached the following season in the most boring Super Bowl I've ever seen against those same Patriots, in which the Rams only scored 3 points.

To note, if you don't want the list to just be the guys who have won rings, OK, fine, but two things:

• Pederson is 2-0 in his two matchups against McVay, one of which was in 2018, when the Eagles were 13-point underdogs, again, with their backup quarterback.

• Pederson has three straight playoff appearances, and while it's fair to point out that both teams finished with 9-7 records in 2019, the Eagles won four straight games to close to season with practice squad guys at almost every offensive skill position, while the Rams dropped two matchups in Weeks 15 and 16, one of which was a blowout at the hands of the underachieving Cowboys, who the Eagles handled the following week. The Rams missed the playoffs, even after trading multiple first-round picks for Jalen Ramsey during the season.

• Wagner-McGough's rebuttal was that McVay (0.688) has the best regular season winning percentage of anyone on his list (Pederson's winning percentage is 0.600 if you include playoff games), which is fine, except that by that logic, why would Kyle Shanahan (0.479) be ahead of McVay, at fifth?

And then some less obvious points:

• One of Pederson's biggest strengths is his lack of ego. He doesn't seem to care much about national recognition (relatively speaking), he isn't seeking front office power, and he is quick to pass on credit to his assistants and his players. He also listens to his players, and considers their voices both in terms of on-field suggestions, and off-field, non-football matters, which has earned him the respect of a veteran locker room, which isn't always an easy feat.

That's not to say that McVay is some sort of ego monster attention whore, but certainly his flair is covered in a way that Pederson's subtlety is not. It remains hilarious to me that people around the NFL were impressed that he knew the names of players on the opposing team:

I want a coach with this type of attention to detail. Full scouting report on the Bears defense. Literally all 11 starters.. pic.twitter.com/MPYPkh3gR1

• Ultimately, Pederson and McVay are both good play-callers and schemers who have gotten a lot out of their offensive talent, but the real differentiation between the two is in-game strategy.

Pederson didn't just ride a great team to a title, like, I don't know... Barry Switzer? In 2017, as a result of his aggressive fourth-down decision making, Pederson added on an extra 71 points to the Eagles' point differential.

In the playoffs, he didn't take his foot off the pedal. For example, in the NFC Championship Game, the Eagles got the ball back at their own 20 with a 14-point lead and only 29 seconds left in the first half. Against the best defense in the NFL, most coaches would take a knee and head into the locker room content with their first half success. Pederson was like, "Nah f*** that," and instead called a 4-play, 60-yard drive resulting in a demoralizing field goal, extending the lead to 17.

And then in the Super Bowl, we all remember this, no?

Conversely, in his lone NFC Championship Game appearance in 2018 against the Saints, McVay made one of the most cowardly decisions you'll see in today's modern NFL.

On 4th and Goal from the 1 (more like the half-yard line), with a little over five minutes to play in regulation, trailing 20-17, McVay opted to attempt a game-tying field goal rather than go for the touchdown and a four-point lead. In case you need an explanation why that decision was awful:

As it turned out, McVay's very wrong decision was bailed out by one of the worst pass interference no-calls that we've ever seen. Otherwise, McVay's offense might not have seen the field again after taking the 3 on 4th and Goal, and the Saints would've headed to the Super Bowl.

In conclusion, if you fancy cowards who shrivel in big moments, then McVay is your guy. Otherwise...