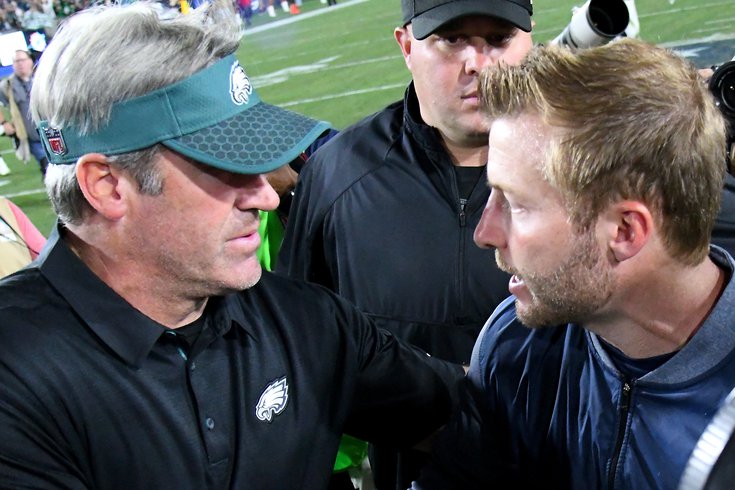 We're just about a month from NFL training camps getting underway — fingers crossed — and the return of football, which this year will coincide with the resumption of the NBA and NHL seasons and the start of the pandemic-shortened MLB season.

But, as we all know, the NFL is the king of content. And even in the offseason, it's a machine when it comes to churning out non-stop news and rumors. And when there's none of that, which is rare, we rank things. Teams, rosters, individual players and even specific skillsets. Like, for example, this one from Pro Football Focus that will likely surprise many Eagles fans.

Reliable when it counts ⌚️ pic.twitter.com/D6l9nWVTr1

And it doesn't stop there.

On Monday, CBS Sports dropped a list of the Top 10 coaches in the NFL — and many Eagles fans upset how the rankings treat Doug Pederson, not just because of where he was ranked but also because of the coaches ranked ahead of him, specifically one.

First things first, let's take a look at the aforementioned rankings, which were put together by CBS Sports' Sean Wagner-McGough and had Pederson ranked ninth among current head coaches.

Top 10 coaches in the NFL
(According to @seanjwagner)

The list starts off with four well-established coaches who have all won Super Bowls and have decades of success between them. But then it goes off the rails a bit, with Kyle Shanahan and Sean McVay ranking sixth and seventh respectively, ahead of a trio of coaches — Mike Tomlin, Pete Carroll and Pederson — who each have Super Bowl titles under their belt.

That's obviously not the only consideration when ranking head coaches, but had Pederson been seventh and Shanahan and McVay been behind him, not many people would have taken exception to his position on the list. But specifically when it came to putting McVay, a coach who has had less postseason success and who Pederson has owned in head-to-head matchups, ahead of the Philly coach, Eagles fans really lost it. And that's likely in part due to some leftover vitriol stemming from McVay beating out Pederson for NFL Coach of the Year in 2017, when the Eagles not only beat the Rams, on the road, despite losing their starting quarterback in the middle of the game, but also went on to win the Super Bowl with said backup.

On Tuesday afternoon, Eagles defensive back Jalen Mills even came to the defense of his coach.

Doug Pederson won a SB his 2nd year in the league with everybody saying he wasn’t going to be a good head coach and a injured roster...y’all trippin https://t.co/ev42GdeuSi

The reaction from Eagles fans (and players) was so negative that Wagner-McGough actually released a video explaining why he put McVay ahead of Pederson, and his argument mainly boiled down to McVay having a better winning percentage, ignoring his postseason success and the amount of injuries he's had to overcome throughout his career as the Eagles head coach.

Ok, Eagles fans calm down. Here is your explanation why Sean McVay is a better coach than Doug Pederson according to @seanjwagner

Wagner-McGough said he wasn't trying look at this "through the lens of one or two games" but wanted to take "a more holistic approach," but that ignores the fact that those "one or two games" are more important than any of the other games their teams play. Making an apples-to-apples comparison of a Super Bowl (and just the playoffs in general) to random mid-season games doesn't make any sense here, and only devalues what Pederson was able to accomplish — and overcome — in his first four seasons at the helm

Eagles fans doing a great job today proving their national reputation is totally unfair and misleading! What a pleasant group of people who definitely wouldn’t ever dare boo Santa Claus!

... and a response like that certainly isn't going to help his cause, especially since he pretty much admitted he's just trolling Eagles fans at this point.

I get it, overly passionate Eagles fans can be an easy target. But if you shoot at them, you better not miss. And this ranking is a big-time miss.

In defense of Doug

Over at NBC Sports Philly, old friend Adam Hermann did his best to dismantle any argument that McVay is better than Pederson.

Frankly, the debate over whether Pederson or McVay is a better coach isn't much of a debate.

Does McVay have a better winning percentage? Yep, absolutely. But that's where his advantages begin and end.

More recently, the Rams showed major regression in 2019, not just in the win column, but all over their offense. Jared Goff often looked lost and had his worst season since his rookie year, despite retaining all of his major pass-catchers and playmakers from the past two seasons. Moving backwards is never a good sign.

The Eagles had a bumpy 2019 season, plauged with injuries across the board on offense, and yet Carson Wentz showed obvious growth, both on paper and from a leadership perspective. The team won high-pressure games down the stretch to reach the playoffs. Winning big games in the face of adversity, particularly with low-quality talent, is a hallmark of good coaching.  [nbcsports.com]

And that doesn't even mention the fact that only one of the two have a Super Bowl ring while the other managed to score a grand total of *checks box score* three points in the Super Bowl. And before you rush to point out that the Rams also held the Patriots to just 13 points, don't forget that, like Pederson, McVay runs the offense. And his offense was nowhere to be found when it mattered most.

A man of many talents

Normally we try to avoid posting two stories from the same outlet in these posts, but Roob's take on Pederson was such a great complement to Adam's post that we felt compelled to include it.

In his column, Roob was trying to show why Pederson is specifically built to handle seasons like the one that lies ahead. And in doing so, he showed another, underrated reason why the Eagles coach is one of the best in the game, one that doesn't necessarily show up in the box score but is incredibly important nonetheless and is a big reason why the Birds have been able to overcome so many injuries in recent years and still find success.

Pederson has shown a truly special talent for really understanding his players, for listening, for caring.

The way he's provided a forum for the Eagles' Black players to openly discuss the Black Lives Matter movement with the team's white players in a healthy, productive way ... that kind of stuff truly brings people together.

Ever notice how nobody ever demands to be traded from here? Or questions a Pederson play call or decision? Or blasts a teammate? Or embarrasses the team?

People want to be here. Because Pederson not only understands how to win football games, he understands how to treat human beings with respect and he knows how to help football players and their families navigate their way through whatever challenge comes their way.  [nbcsports.com]

Let's switch gears for a second from the coach to his players. With camp quickly approaching, it will soon be time for roster battles to begin and 53-man roster projections to take over our timelines. PennLive's Daniel Gallen got ahead of the game, releasing his latest projection this week.

While much of the talk revolves around the skill position players at receiver and running back — doesn't it always? — we thought it would be interesting to take a look at the secondary, which is a part of the roster that has undergone a serious makeover this offseason.

Slay was arguably the biggest splash of the offseason for the Eagles as part of a new-look secondary, and the Eagles will hope he can continue to be a lockdown corner in 2020. From there, the bottom of the roster competition should be interesting, with former third-round pick Rasul Douglas, free-agent signing Trevor Williams and others in the mix for one of the final spots.

Marcus Epps and Rudy Ford both saw time on the field last season, but the Mills move and the additions of Parks and Wallace probably squeezes them out, despite the departure of Malcolm Jenkins.  [pennlive.com]

Don't sleep on these Eagles

Speaking of the Eagles secondary, the team is apparently pretty high on new cornerback Nickell Robey-Coleman, who the team views as "a top-five slot corner in the NFL."

Over at ESPN, Tim McManus took a look at four players the Eagles are higher on than the fanbase, and interestingly enough three of those players were on the defensive side of the ball — and the one offensive player was a bit of a surprise. Here's a look at what McManus had to say about Robey-Coleman...

It was a welcomed surprise that the Eagles were able to sign Robey-Coleman to a one-year, $1.35 million contract in free agency this offseason. There wasn't a pressing need at nickel corner -- they like Cre'Von LeBlanc and know Avonte Maddox can play the role -- but the value was too good to pass up.

Philly views Robey-Coleman as a top-five slot corner in the NFL. He allowed a passer rating of 80.1 last season with the Los Angeles Rams -- good for 13th among all CBs-- and was sixth in yards per slot coverage snap (0.63), according to Pro Football Focus. There's plenty more on his résumé than the controversial no-call pass interference in the 2018 NFC Championship game, including 48 career passes defensed and five forced fumbles. The Eagles believe the additions of Robey-Coleman and Darius Slay have substantially improved the cornerback position.  [espn.com]

And finally, we'll end on a story that should make Eagles fans smile. Over at SB Nation's Giants site, Big Blue View, writer Ed Valentine wonders if the Eagles and Cowboys should even be considered Giants' rivals, given that both those teams have absolutely dominated New York in recent years.

Dallas has six straight wins over the Giants, but their success against the Eagles is even worse — and the Birds added a Super Bowl during the stretch, which just makes it an even tougher pill to swallow.

It is easy, and obvious, to think of the Dallas Cowboys and Philadelphia Eagles (sorry, Washington Redskins fans!) as the Giants’ biggest rivals. Yet, there is a problem.

Can there truly be a rivalry when one side never — or almost never — wins?

It’s even worse when you look down the highway to Philadelphia. Eagles fans are intolerable, but the Giants don’t have much to argue about. The Giants are 1-11 against the Philadelphia Eagles since 2014, and the Eagles won their only Super Bowl title in 2017. Again, Eagles-Giants certainly hasn’t been much of a rivalry lately. I have sat through a number of late-season games at MetLife Stadium attended by far more Eagles than Giants fans. Until the Giants win some games against Philly, and Giants fans take back their own stadium (when anyone is actually allowed to sit in it to watch games), this is only a wannabe rivalry from the Giants side.  [bigblueview.com]