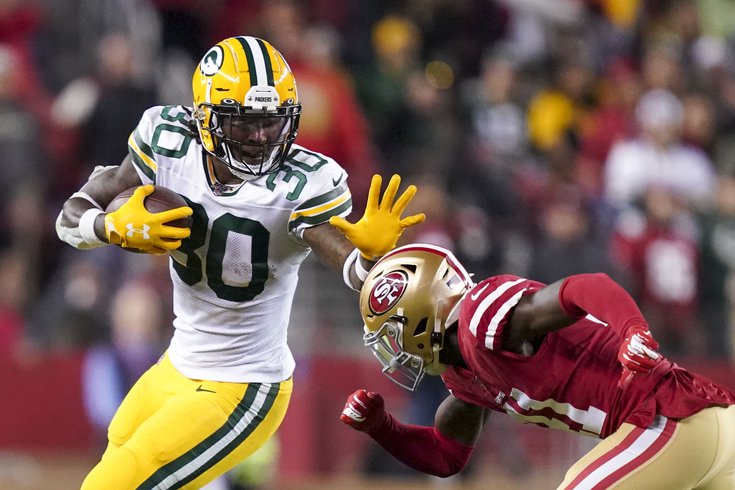 Throughout the 2020 offseason, the Philadelphia Eagles have repeatedly been linked to running backs, and it seems pretty clear that they want to add a veteran to their stable.

They were in on Carlos Hyde, who got signed by the Seahawks, and they reportedly had interest in Devonta Freeman, who seems to be waiting for more money than the Eagles want to pay a backup running back. And then of course there's LeSean McCoy, who the Eagles have been rumored to have some level of interest in for a few years now.

There's also the running back trade market, which is one that Howie Roseman likes. In 2019, he traded a sixth round pick to the Bears for Jordan Howard, who had one cheap year left on his rookie contract, and of course in 2017, he traded a fourth-round pick to the Dolphins for Jay Ajayi, who had a year and a half left on his rookie deal. Ajayi helped the Eagles win a Super Bowl, and Howard was a productive player until a "stinger" injury derailed his season.

That running back trade market is one that Roseman could explore once again. The Eagles would likely be interested in a power back who is ideally still on his rookie contract, seeing as the Eagles have to be fiscally responsible with the possibility of the salary cap not rising in 2021, as was previously expected before the coronavirus outbreak.

At 6'0, 213, Williams is sort of an average-sized back, but he is a tough inside-the-tackles runner, who has been durable so far over his three-year career in Green Bay. He also has some passing game chops, as he has 91 career receptions and is thought of as a good blocker in pass protection.

• Royce Freeman, Broncos: The Broncos already had a quality back in Phillip Lindsay, and they added Melvin Gordon this offseason, leaving Freeman, a 2018 third-round pick, as the third back in the pecking order, at best. Freeman is a 238-pound back who has shown flashes of talent at the pro level, but has been inconsistent in figuring out the subtleties of the NFL through two seasons. The Eagles also of course have the Rich Scangarello connection to Denver.

• Kareem Hunt, Browns: Hunt was a star with the Chiefs for a season and a half, until Kansas City waived him during the 2018 season in the aftermath of the release of a video showing Hunt pushing and kicking a woman.

During the 2019 offseason, it was speculated that Hunt would interest the Eagles, since he would fit like a glove in their west coast offense, like he did in KC. Instead, former Browns and Chiefs GM John Dorsey signed Hunt, who was reinstated during the 2019 season, and played from Week 10 on. During the 2019 season, Hunt carried 43 times for 179 yards and 2 TDs. He also caught 37 passes (4.6 per game) for 287 yards and 1 TD.

While the Browns don't have much in the way running back depth after starter Nick Chubb, there are apparently concerns about Hunt's ability to avoid trouble in Clevelend, via Mary Kay Cabot of cleveland.com.

I think Hunt knows he has very little margin for error and mustn’t do anything to jeopardize his career with the Browns. I also know that they’ve been extremely happy with behavior and progress since his traffic stop in January for speeding, during which he was found with a small amount of marijuana in the car. I do think it’s especially hard for Hunt to stay on the straight and narrow here in Cleveland, where he’s surrounded by some family members and friends who haven’t been good influences. But he’s working extremely hard to overcome that and to be the model citizen the Browns want him to be. I think any further indiscretions will be handled on a case-by-case basis. If it’s a minor incident, it might not be a deal breaker. If he demonstrates over the next few months that he’s staying on the right track, the Browns will probably start talking extension. If the Browns part ways with him, I can see another team giving him a chance.

Hunt can run, catch, block, and he almost never fumbles. If the Eagles are willing to roll the dice on a character concern guy, Hunt could interest the Eagles, though his $3,259,000 salary in 2020 might be a little pricey.