The ultimate guide to the 2015 Flower Show

Everything you need to know about the famous horticultural extravaganza 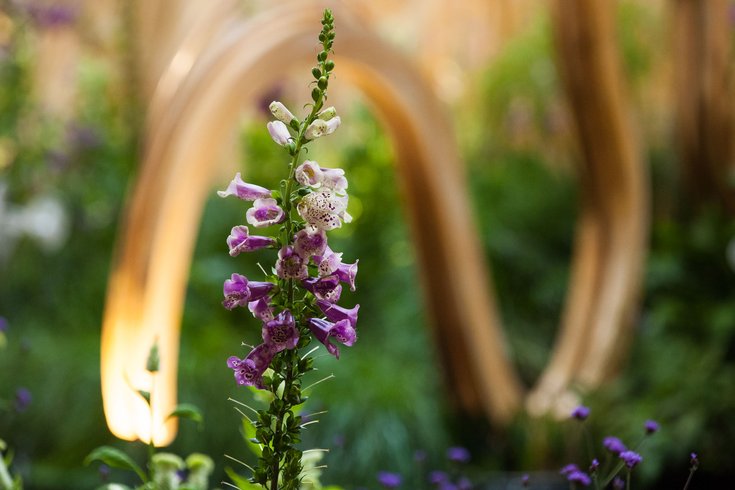 The 2015 PHS Philadelphia Flower Show opens from this Saturday, February 28 until March 8, 2015 at the Pennsylvania Convention Center. This year, designers take inspiration from Disney and Disney Pixar films and will "Celebrate the Movies."

The Pennsylvania Horticultural Society's Philadelphia Flower Show 2015 (quite the mouthful, no?) opens Saturday, Feb. 28, and lasts through Sunday, March 8. Between opening day and when the final petal falls, there will be so much to do at PHS PFS. Though you might not be able to see it all in one day, you can certainly try. Look below for details on the show's exhibits, where to eat and the special events coming up.

The theme for this year's exhibit is "Celebrate the Movies," so cinephiles should be on the lookout for fun details. Entering through Hall A, you'll find yourself standing under the glow of an old-fashioned movie marquee decked out with flowers named after film legends. Directly behind that, you'll find a giant bloom-filled chandelier and a giant movie screen showing entries into the PHS short film competition "What Is Beauty?"
Beyond the entrance gate, you'll see a few dozen landscape and floral exhibits. Each is a few yards long and wide and can be viewed from multiple angles. The long aisles can get really overwhelming, but they're organized in a grid to keep guests fairly oriented. Look out for signposts at each exhibit that include titles, designers' names and descriptions.

A rendering of the Flower Show entrance. Philadelphia Flower Show/PHS
A large section inside the Hall B entrance is Hamilton Horticourt, a plant competition featuring specimens of all kinds. Behind that, on the opposite end of the exhibition hall from the main entrance, is The Marketplace. Here, guests can take home products and plants of their very own from hundreds of vendors.
Warning: The smell of flowers and mulch will absolutely hit you like a wall when you walk in the door. For those with allergies, be sure to take some medicine before entering, or bring some tissues!

As the PHS Flower Show has paired up with Disney and Disney Pixar, many of the exhibits have taken their inspiration from films like "Cinderella," "Frozen" and "Mulan." Designs like "The Nightmare Before Christmas" and "Aladdin" are a bit more literal and easy to spot, while "Cars" and "The Parent Trap" are subtler. Trying to figure out which is which quickly becomes a fun game of I-Spy.
Some exhibits will participate in professional and educational competitions, while others are submitted by plant societies or sponsors. This year, the competition has been judged using an international system, so exhibitors will compete for gold, silver and bronze medals, like in the Olympics. Winners and awards will be listed at each competing exhibitor's signposts. 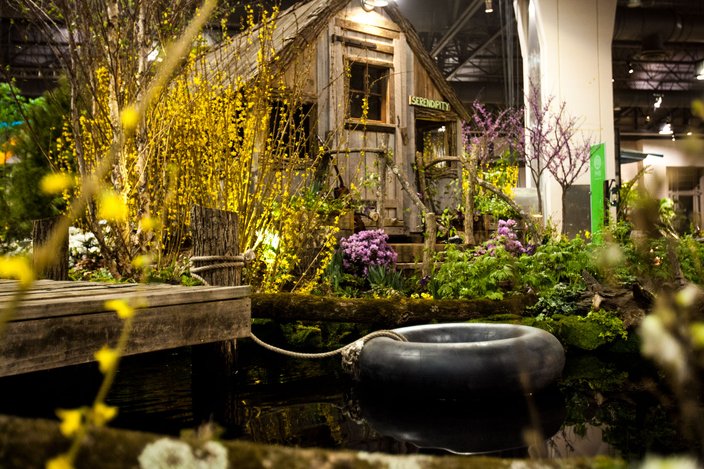 Do you recognize this summer camp display? Hint: Think "Parent Trap!" THOM CARROLL/PHILLYVOICE
Exhibitors include international landscape stars Jim Fogarty of Australia, Leon Kluge of South Africa, Paul Hervey-Brookes of the U.K. and Lim In Chong of Malaysia. All are exhibiting for the first time in the U.S. Serious gardeners and landscapers will have fun at the Designer's Studio and the Gardener's Studio with real-time floral contests and how-to's.

Along the edge of the main exhibition hall, there are a variety of food stands, including Ben & Jerry's Ice Cream, movie candy, a malt shop, coffee, a Di Bruno Bros. "Old Hollywood"-themed stand and, of course, cheesesteaks. Also in the main hall is a Termini Bros. stand, a "Dusty Saddle Saloon" burger joint and the Hollywood Bar.
An Emerald City Diner will stake out on the Grand Hall Concourse, serving up a - you guessed it - "Wizard of Oz"-themed menu. If you go further down the Concourse and head to the Grand Hall Backlot, you'll find the PHS Pop Up Beer Garden. They'll be serving two special cocktails called the "7-Year Itch" and "Casablanca," along with the PHS Hard Cider. Fine Wine & Good Spirits will also be on hand for tastings.
The third level of the Convention Center houses the Legends Speakeasy, with a menu featuring fried oyster, braised beef and chicken paillard sliders. The Garden Tea in the Concourse predictably has light fare offered twice a day at 12:30 and 3:45 p.m.

All week PHS will hold themed days and special events. The fifth annual LGBT Party will be held Sunday, March 1, from 4-6 p.m. Chef Jaime Laurita and Pam Grier will appear, and the Philadelphia Gay Men's Chorus will perform. A special drag performance will liven things up, and red carpet photo ops will be available, alongside food and drinks. Tickets are $50 and include general admission.
On Wedding Wednesday, March 4, Philadelphia Wedding will present local bridal fashion and wedding vendors for brides- and grooms-to-be. Local caterers will supply bites alongside hair and makeup trials, a real live wedding and the Greatest Groom Contest. The night runs from 6-8 p.m., and the cost is $50, including admission.
Thursday, March 5, is College Night, with live entertainment, giveaways and student pricing available. Thursday is also Girls Night Out, which includes giveaways, a complimentary cocktail and health and beauty tips.
Fido Friday, March 6, allows owners to bring their furry friends to the show and includes a canine fashion show. PAWS (the Philadelphia Animal Welfare Society) will be on hand with adoptable dogs, and the ASPCA and Subaru are teaming up to provide free personalized dog tags for owners as well as information on how to keep your dog safe in the garden and during cold weather.
Finally, Cinderella Sunday, March 8, features appearances by Cinderella, Miss Philadelphia and Miss Philadelphia Teen to pose with future princesses.

Being dragged along to the show? There are other things to do besides look at gardens. "The Butterfly Experience," an interactive exhibit bringing more than 1,000 butterflies and exotic species indoors, returns this year. As does the Make and Take Room, where you can create your own project, instructions and materials provided. Make wearable art for $10 or a terrarium for $20.
Gene London's Hollywood Collection, a private collection of film wardrobes, will make its debut at the Flower Show. TV personality London has collected more than 60,000 gowns and accessories, including a dress worn by Grace Kelly. For $5, Flower Show attendees can see 50 items from London's collection and meet the man himself.
Finally, two celebrities will make appearances at the show. Dan Aykroyd will be signing bottles of his brand of vodka (because who doesn't want autographed alcohol, right?) on Friday, March 6. Semi-celeb Ethan Wayne, John Wayne's son, will be signing bottles of Duke Bourbon Saturday, Feb. 28, because why not.