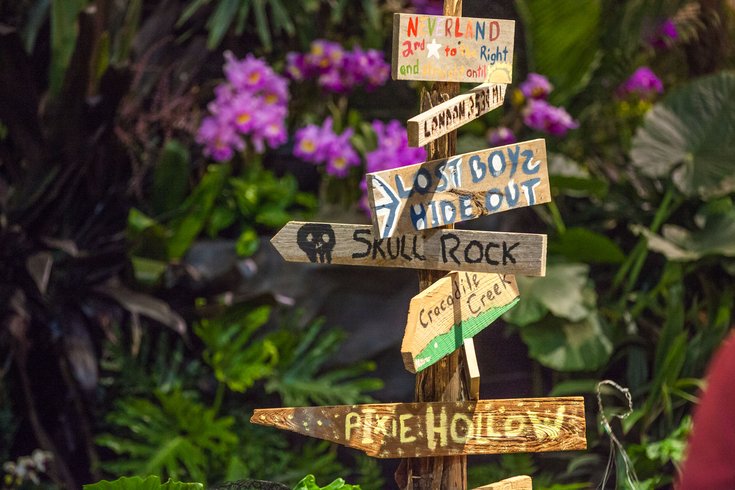 The theme of this year's Philadelphia Flower Show, a world-class event that attracts international talent, is "Celebrate the Movies." Pairing the glamour of Hollywood with the theatricality of a flower and garden exhibit is a no-brainer. Red carpet starlets and beautiful blooms seem to go hand-in-hand.

It should come as no surprise, then, that the Pennsylvania Horticultural Society, which runs the Flower Show, wanted to officially pair with a major studio and that their first choice was Disney. After all, aligning with one of the most ubiquitous brands in the world would give the Flower Show access to a boon of characters and stories for inspiration, not to mention association with a legacy brand.

Just for starters, The Walt Disney Company encompasses theme parks and resorts in North America, Europe and Asia; a vast web of media networks, including the Disney/ABC Television Group and ESPN; The Walt Disney Studios umbrella of animation and live-action films; the Pixar, Marvel, Touchstone, Lucasfilm and Hollywood Records brands - oh, and they made a little film called "Frozen."

Disney has been bombarding American and, eventually, global culture with its products since 1923. After nearly a century of mouse ears and fairy tales, you might think consumers would get a bit of Disney fatigue, but the brand is stronger than ever. Just a few weeks ago on Tuesday, Feb. 3, The Walt Disney Company reported a record $13 billion in revenue for the first fiscal quarter of 2015.

Undoubtedly, teaming up with Disney will work well for the PHS Flower Show. As it stands, the show brings in anywhere from 230,000 to 250,000 attendees, depending on good weather and such, with the numbers generally trending upward each year, according to PHS Director of Communications Alan Jaffe.

Though the Flower Show tends to sell more tickets at the door than pre-sale, making it difficult to predict this year's attendance, Jaffe told PhillyVoice.com he conservatively estimates this year will see 240,000 or more guests.

"Advanced ticket sales are going well, and we’re sure the theme and the Disney connection is helping create excitement for this year’s presentation," Jaffe told PhillyVoice.com. "We’re not able to see who exactly is buying tickets, but there is a family package that is very popular and is selling strongly this year."

During a recent preview tour of the show, while exhibits were still being pieced together, questions flew back and forth about what exhibit represented which movie and how. Many in the group, composed mostly of middle-aged media professionals and serious gardening writers, remarked they had never heard of some of the movies mentioned. Certainly, the Flower Show's core audience, as represented by those covering the event, isn't the core audience for Disney movies, but if the family package sales are any indication, they will bring along the little ones who are.

As PHS Chief of Shows and Events Sam Lemheney said, "One of the main reasons why we went after Disney is because of the wide audience that they attract and that we want to come to our show. ... This is a great way for us to introduce families and kids [to the show]."

And a wider audience, of course, means a wider profit margin. But, despite the pretty obvious commercial motives behind the partnership, show-goers will eat up exhibits inspired by "Cars," "Pirates of the Caribbean," "Cinderella" and, yes, "Frozen." 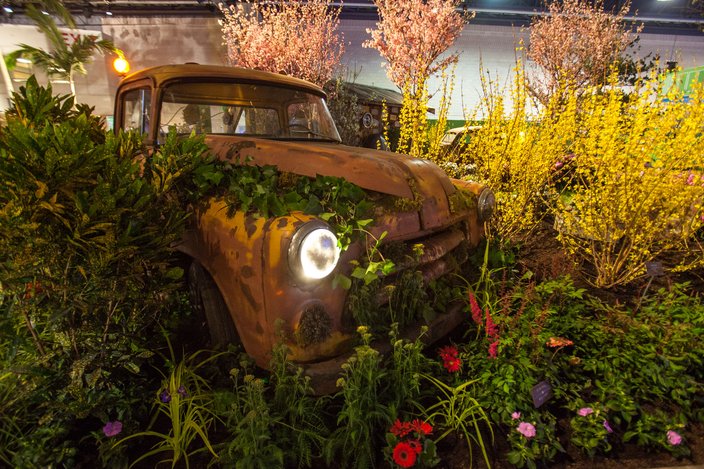 Why? Well, you could say it's because they've bought into Disney's particular brand of commodified culture and are hypnotized by a shrewd corporate philosophy that seems to hinge on the word "synergy." Or you could blame the general deregulation of American business that allowed Disney to swallow up brands and amass such an empire.

Or, it could be that Disney is really good at telling a story.

"If they weren’t doing great work and weren’t delivering a great product that was entertaining – Disney, the Flower Show – we wouldn’t be around for as long as we've been around," said Lemheney, who himself spent 13 years working at Disney World in a range of roles.

Certainly, The Mouse House that Walt built didn't pop up in a day, or even a decade. Though a certain amount of quality "imagineering" helped shape the media colossus, it wasn't built on originality. It's built on the fundamentally human love of folklore.

Folklore is the wide range of media, including music, proverbs, beliefs, customs and stories, that a group of people shares. Alongside food, clothing and rituals, folklore is a key slice of what we consider "culture." Sharing and repeating folklore is a way of participating in a group culture, making it exclusive to those who know it. But more than just marking one culture from another, folklore also provides models for how we think and interact. We love to retell these stories because they give us a common ground on which to relate.

Disney has made a fortune off this human need for shared storytelling. From the get-go, Walt Disney's animated stories focused on legends, myths and fairy tales. His first animated series of shorts for his first company, Laugh-O-Gram, featured Little Red Riding Hood, Jack and the Beanstalk and Goldilocks and the Three Bears.

In fact, five of the company's first six animated feature films, almost all of which have become classics of the Disney canon, were retellings of fairy tales or popular children's books. (The exception is "Fantasia," which is really just a long music video for Leopold Stokowski's classical works.)

During World War II, when Disney was asked to make propaganda films for the U.S. government, they created more song-and-dance animations, many of which used folk songs and pop songs. After that slew of films they returned to folklore, producing films like "Song of the South," "Cinderella," "Sleeping Beauty" and "The Story of Robin Hood."

The source material for many Disney films, both animated and live-action, can easily be traced to authors from different eras and regions, from Lewis Carroll to Rudyard Kipling. Others are incorrectly credited to The Brothers Grimm; though it's true the pair popularized fairy tales in the early 19th century, they gathered them from many sources across Europe, including centuries-old oral traditions.

But if you asked a child today where stories like "The Jungle Book" and "Alice in Wonderland" came from, they'd probably respond "Disney!" with a knowing smile.

That's because Disney hasn't just bought, sold, reshaped and retold the folklore of global cultures for profit. For a new generation, the company's products have become folklore.

Today's children learn treasured fables not from grandparents or teachers, but from TV and movies, replacing American folk songs with Oscar-nominated singles. If you're skeptical, just ask the nearest 5-year-old if he or she can sing "Let It Go," then ask if they can sing "Oh, Susanna."

Disney has managed to repackage stories we love to tell ourselves, as a culture or a community, and taken ownership of them. They can even retell their own stories, frame for frame, and we will keep enjoying them - take the 16 million views of the trailer for the upcoming live-action "Cinderella" (or Lemheney's assurance that families will swarm this year's show) for proof.

Dustin Kidd, associate professor of sociology at Temple University and author of "Pop Culture Freaks," said that our consumer culture is to blame for that: "We’re always focused on consuming new releases, whether it’s new music, new film, new television shows...We tend to take for granted that we could watch [old movies] anytime, and we don’t. So really, we kind of need those remakes to bring them back into our lives."

Culturally, we crave the repetition of treasured stories in this flood of new media, and Disney is happy to provide it - for a price. With its mega resources, Disney has control over our most valued stories, ones we feel like we own because we buy trips to Disney World and DVDs and find them reflected in our biggest community events, like the 187-year-old Flower Show.

The fact that Disney has helped shape contemporary folklore is not, in itself, harmful. Its commodification of it may be sleazy, but it hasn't yet become detrimental. Instead, the problem lies in one company's ability to control such extremely influential stories.

"I think that these stories are tremendously important for how we make decisions in our everyday lives," Kidd said. "There’s a lot of sense that people draw on their experiences with stories and with popular culture as they make decisions, as they confront political issues and even as they make everyday decisions about how to handle a romantic situation or a family situation or at work – they look for models." 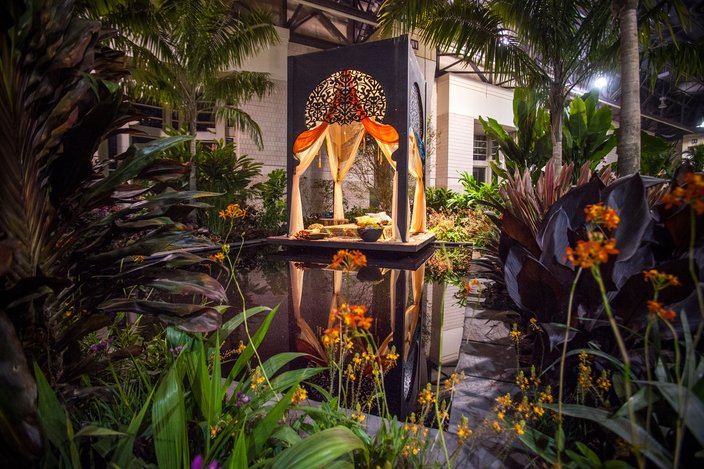 Our reliance on folklore, fairy tales and pop culture to guide us through life is even more troubling when key sectors of our population go underrepresented or misrepresented.

"The diversity...in Disney films and other kinds of films is way behind the diversity in American society more broadly, and it shocks me that they lag so far behind, that they’re not more responsive to their incredibly diverse audiences. It’s true for racial and ethnic diversity, but it's just as true for gender," Kidd said.

The fact that Disney characters and stories skew white and European is no secret. If they didn't, the immensely positive response to Disney's first black, Latina, and Polynesian princesses wouldn't have been so vocal. Audience desire for more diverse characters is certainly there. (Tellingly, when I visited a Disney store in December 2013, there were plenty of "Frozen" dolls available, but when I asked for a "Princess and the Frog" Princess Tiana doll, an attendant informed me they'd been sold-out for six months.)

But as the creators and gatekeepers of contemporary folklore, Disney must step it up when it comes to diverse representation both on- and off-screen.

"The real transformation that needs to happen is in the diversity of who gets to tell these stories. ...Until you get more women and more minorities in those studios, telling their stories, as writers and as artists and as directors, you won’t see really the kind of diversity we need to see on screen," Kidd said.

Though the Flower Show will include exhibits inspired by the far-flung landscapes of "Mulan" and "Aladdin" alongside the princess fairy tales, Disney itself has a long way to go if its influential products are to ever truly reflect the cultures it claims to represent.

Fortunately, for PHS, they have very little to lose in this scenario. The show was easily granted permission to use Disney's branding and titles for free, bypassing the annoying licensing fees and royalties places like Euro Disney even have to deal with. Ostensibly, they are reaping in any extra profits from children excited to see Cinderella's glass slipper up close or at least willing to tag along with grandpa. But maybe with a little magic, the next time the Flower Show teams up with such a cultural hallmark, every member of the audience will feel included.