Banksyland, which is not affiliated with the artist himself, will announce the venue two weeks before it arrives 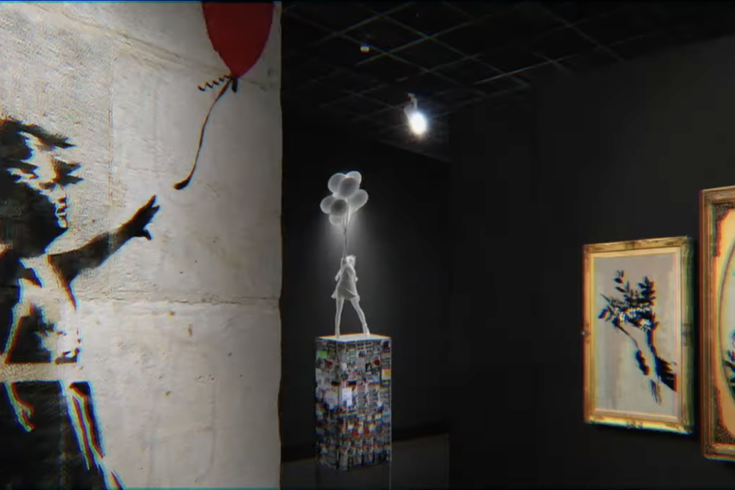 Banksyland is coming to a secret location in Philadelphia from Sept. 2 through Sept. 5. The exhibit features over 80 pieces, including studio works, salvaged street art and immersive installations. The show is not affiliated with Banksy.

A controversial exhibit inspired by the work of elusive street artist Banksy is making its way to a secret location in Philadelphia next month.

Banksyland, an internationally touring exhibition that claims to immerse audiences in the works of the highly-secretive artist, will be in the city from Sept. 2 through Sept. 5. It features more than 80 pieces, including studio work, salvaged street art and interactive installations.

Where the exhibit will be shown has not yet been revealed, as the location of Banksyland in each city is announced to ticket holders two weeks in advance. The ticket website says it will be held in Center City within the 19102 area code, but it doesn't get more specific than that.

The featured pieces include large-scale images and video exhibits. The collection also features authenticated studio work, thanks to a network of private collectors. Visitors have described it as having many social media-worthy photo opportunities. There is merchandise for sale, as well.

If the exhibition seems secretive, it's likely because the artist from which Banksyland gets its influence is extremely enigmatic.

Banksy is an anonymous street artist and political activist who is thought to have been born in the 1970s in Bristol, England. He came to prominence as a freehand graffiti artist in 1993 and is renowned for his anti-authoritarian art, which merges graffiti with installations and performance work.

The artist is likely best known for the iconic 2006 "Girl with Balloon" mural, or the incident at an auction in 2018 when a canvas version of the mural seemingly shred itself after selling for $1.4 million. Other attention-grabbing Banksy moments include hanging his own artwork on the walls of major museums in New York City and London in 2005, and his creation of the 2015 apocalyptic theme park Dismaland. He has also painted live pigs and a live elephant during shows.

While Banksy is known for his installations, Banksyland is not one of them. Despite bearing the artist's name and showing his artwork, it is not authorized by him.

The exhibit's website, which boasts its "unauthorized" status, describes Banksy's work as "decidedly political, taking aim at militarism, consumerism, capitalism, and greed." Yet, some believe Banksyland sets out to capitalize on the artist's anti-capitalism message.

Visitors must pay for a $29-plus ticket, a paradoxical way to see an exhibition inspired by an artist who aims to create free, accessible street art.

The group behind Banksyland is nearly as enigmatic as the artist. Elle Miller, the curator of the exhibit, started a company called One Thousand Ways to facilitate the show. It was originally envisioned as a nonprofit, with proceeds going towards charities supporting art organizations. However, Miller supposedly was advised to do an LLC instead, Seattle Times reported.

Publications are not the only ones pointing out the murkiness of the exhibit. Banksy fans have taken to the comment section on Banksyland's Instagram to defend the artist in what they express is an exploitative exhibition.

Banksyland is not the only exhibit of its kind – it's just the latest in a string of unauthorized Banksy-inspired shows popping up worldwide that have prompted Banksy's own team to speak out.

The artist's website warns: "Members of the public should be aware there has been a recent spate of Banksy exhibitions none of which are consensual. They've been organized entirely without the artist's knowledge or involvement. Please treat them accordingly."

If that warning was a bit subtle, Banksy's FAQ page lays things out more bluntly: "Banksy has NOTHING to do with any of the current or recent exhibitions and they are nothing like a genuine Banksy show. They might be crap so please don't come to us for a refund."

Despite the controversy surrounding Banksyland and some delays in the start of its tour, it was sold out in Portland, Seattle, Austin and Dallas. Time slots also are already beginning to fill up for the Philadelphia run. Those who do want to see the exhibit for themselves, without expecting a refund from the real Banksy if it's crappy, can purchase tickets online.