Zac Rubin, owner of the New York-based company that's creating the space, said the project should be completed by the spring 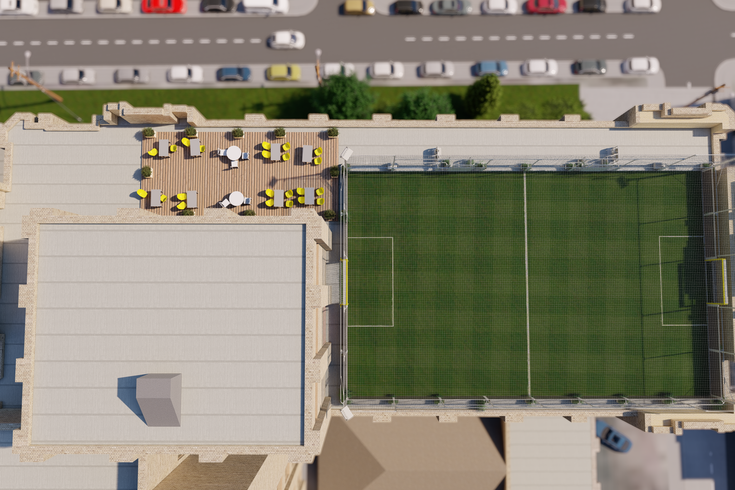 U90 Soccer Center, a community sports center based in Queens, New York, is opening a new location at the Bok Building later this year. The space will include a rooftop soccer field, an indoor soccer field, and a retail shop.

The Bok Building in South Philadelphia is set to welcome its only sports-themed tenant this fall, as U90 Soccer Center prepares to open the city's first rooftop soccer field.

This is the company's first venture outside of New York, where it primarily focuses on its community sports center and retail space in Queens. When executive director Zac Rubin came to visit one of Bok's other tenants two years ago, he discovered a vacant space and knew he wanted to bring soccer programming to the city.

"When (looking for new cities), we looked at a couple different things," said Rubin. "One is space — spaces can be so different that we wanted to find something dynamic and unique. The other is community, and where there's the most need as far as athletic and recreational space. South Philly and Bok fit better than I ever could have imagined."

The outdoor field will be installed on the Bok Building's 7th floor terrace, which means Bok Bar and Irwin's — both on the 8th floor of the building — will not be impacted. In addition to the rooftop field, U90 Soccer Center is also opening an indoor field, which will take over the former girls' gymnasium on the lower floors of the building.

There will also be a retail shop operated by sporting goods chain Soccer Post, which has locations throughout the country. 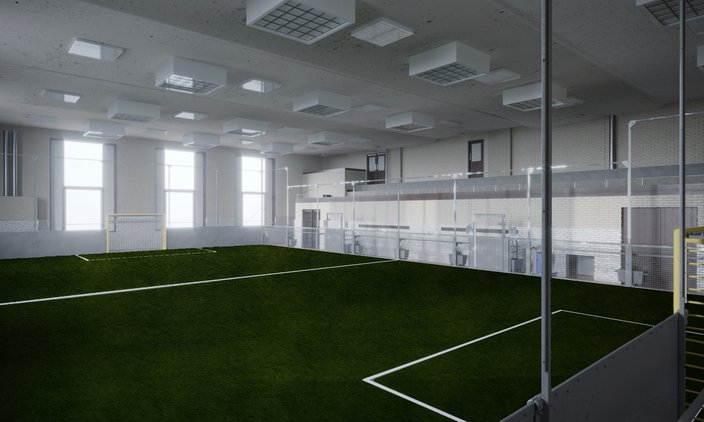 The basement floor of the Bok Building will hold a retail space, operated by sporting goods chain Soccer Post. A former gymnasium just a floor above the basement will be transformed into an indoor soccer field.

"We're creating a multi-faceted space to experience soccer," Rubin said. "To me, that means providing a place to be a player and creating space for people to play the game. It also means creating an experience where people are able to view, so fans of teams from around the world are going to be able to watch games. It's all going to mesh together in a really unique experiential space surrounding the world's most popular sport."

U90 Soccer Center has programming for people of all ages and Rubin said he wants to ensure that there are no cost or opportunity barriers to using the soccer fields. He told the Inquirer that the company works on a model where they "within reason, never turn somebody away."

The New York location includes wheelchair soccer and other programs for children with cerebral palsy, stroke and traumatic brain injury. Rubin said he wants to bring all of that programming to the Philadelphia location, especially given the smaller-size fields.

"There are a lot of things in New York and Philly that are (similar)," Rubin said. "Even just the way that the populations are. We have a lot of employees from the Philly area and a lot of connections to the city, so we're excited. It's somewhere we feel we understand, kind of sticking close by on the East Coast."

While there is no official timeline for when the U90 Soccer Center will open, Rubin said that he's aiming to have the indoor portions of the project ready by September. He said the rooftop field may take a little longer, adding that the entire project should be completed by the spring.

The project comes just a few months after Philadelphia was named one of 11 American host cities for the 2026 World Cup. Rubin said he plans to host watch parties for the event, which starts in late November.

Though South Philly is home to the city's Sports Complex, Rubin told the Inquirer that through his conversations with members of the city's soccer community, the neighborhood is lacking in athletic facilities for kids and adults. Philly's official soccer team, the Philadelphia Union, plays its home games at Subaru Park in Chester, about 20 miles outside of the city.

Rubin told Axios he hopes to solve the problem by transforming portions of Bok into a community soccer center to celebrate the game as a whole, and support programming for people of all experience levels.

At its Queens location, U90 Soccer Center has programming for children, teens, and adults – including open play for toddlers. Rubin hopes to include students from the neighboring Southwark School as part of its programming, and will utilize grant funding for people who can't afford to play.