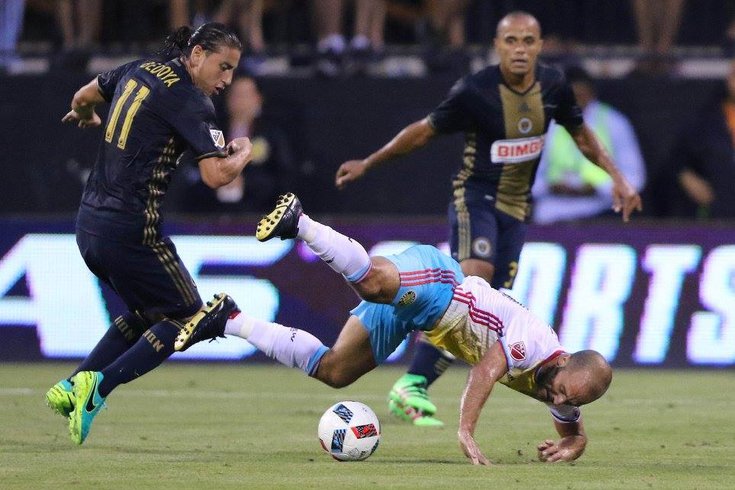 Alejandro Bedoya battles with Federico Higuain during the Union's 2-1 win against Columbus.

After going winless on the road for five whole months, the Philadelphia Union now have back-to-back victories away from Talen Energy Stadium.

It's a strange cycle for the Union, who put themselves on the map with that eye-opening win in Columbus way back on March 12th. On Wednesday night, they solidified their playoff positioning with a second road win at MAPFRE Stadium, sweeping the season series against the 2015 Eastern Conference champions.

This was the first time in franchise history that the Union have pulled off a three-game season sweep. They came close in 2013, but settled for a draw against D.C. United to finish with a 2-0-1 season record against their I-95 rival.

This game saw rookie contributions complemented by a stout defensive performance. Fabian Herbers and Keegan Rosenberry became the first rookie pair to score in a single game since Dillon Powers and Deshorn Brown tallied for Colorado in a 5 to 1 win against Seattle back in 2013. Josh Yaro earned his first start in five games and the Union backline held Columbus to a lone, controversial goal.

Herbers as a 'wide' midfielder

I said before the game that I didn't understand the decision to use Fabian Herbers on the right side of the midfield.

It wasn't a criticism of the player; it was a question of whether or not it makes sense to play him there. He's a rookie with goal-scoring instincts who seems like he does better when he's paired with another striker and playing closer to the box.

In this game, he did a nice job of pinching inside to get into that area, which also allowed his roommate, fellow rookie Keegan Rosenberry, to eat up the vacated space on the right flank.

Herbers started early with a good pinch and through-ball attempt. A short time later, he found himself wide right from a meaty Sapong pass and overcooked a cross to the other side of the field. He surfaced again with another smart collapse and shot on goal from a low Rosenberry cross.

The goal came from a similar spot, when he picked up a pass right at the edge of the box following a trailing run. The second effort and lunging finish showed a lot of heart and determination.

Herbers finished with one goal on three shot attempts. He went 10 for 16 in passing and added one interception and two recoveries.

Again, the criticism is not of him being on the field, it's putting him in that wide right spot. I think you can get him closer to goal in a 4-4-2, but does that unbalance the side too much? Tranquillo Barnetta is in good form right now and he's not someone you want to move from the No. 10 position if possible. Alejandro Bedoya is feeling his way into the formation. Brian Carroll and Maurice Edu look like they'll eventually be back in the lineup.

But, if it really came down to it, you could try something like this if you're committed to getting Herbers on the field: 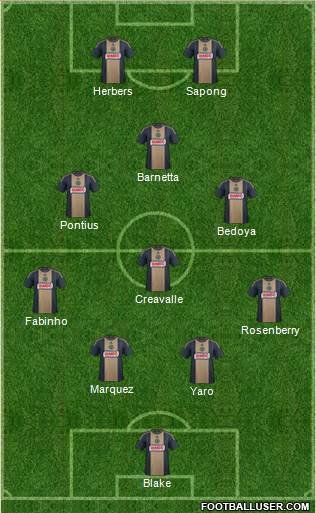 All you're doing here is moving Ilsinho to the bench, adding Herbers, and reshaping into a diamond. You've got guys in Bedoya and Pontius who can play those midfield roles while still letting Barnetta do his thing. There will be more of a burden on Creavalle, but that's always going to be the case when you move to a two-striker set.

Here's a freeze frame of the Columbus goal, which started with a scramble and appeared to be cleared off the line by Creavalle. 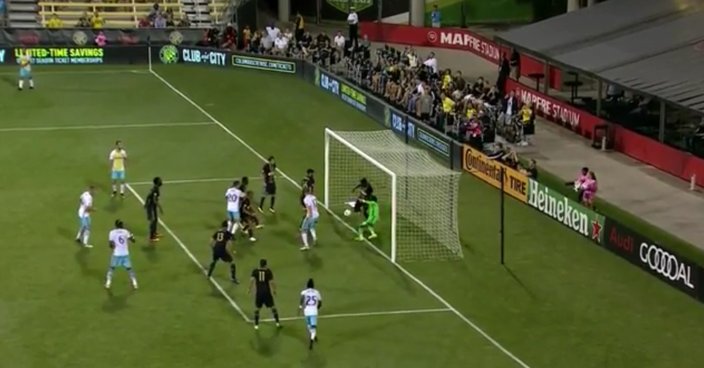 On first look, I thought the ball had just barely gone in, but we don't get a great angle on the replay.

"I know it didn't go in. My guys are honest as can be, and they were there, and they said it's not even close. The only thing with that, if you're a linesman and you're 60 yards away, you have to be 100 percent sure that it's over the line if you're going to influence the game like that. And it influences the game in a major way. We could be walking out of here with one point. Who knows? The Crew could come down and score again. These are big decisions and it's a great advertisement for goal line technology. I know they're working hard to get it, but let's get these plays right, because they have consequences. They have real, big consequences for players, for coaches, and everybody. To get involved, you better be 100 percent sure, and he was a little quick. He was excited to call it a goal. It was kind of, I don't know, disappointing. Again, my guys said it was actually not even close."

The biggest tactical storyline in recent weeks has been Curtin's decision to go with Ken Tribbett over Josh Yaro.

Tribbett played a great game in the 4-0 win at New England, then struggled against Toronto and was pulled at halftime of the 3-1 loss.

Curtin decided to go with Yaro for this game, and the rookie turned in a very good performance. He was smart positionally and quick to react. His ability to close space and use his recovery speed killed a couple of opportunities that might have amounted to something for Columbus.

In this first clip, he slides to cut out the passing lane to Ola Kamara, then recovers and gets himself on the correct shoulder as the striker tries a low-percentage turn-around shot with his left foot.

This was a play that happened later in the game. Yaro is sliding backwards as Justin Meram pushes towards the box. When he tries to slot it through for Federico Higuain, Yaro does a nice job to pull off, peel, and quickly pounce on the heavy pass.

He makes it look simple, but that's an intuitive turn and interception. Richie Marquez is sliding across the box to help and there's an open man on the far side as Fabinho tries to recover.

This third one just shows a bit of Yaro's closing speed. With Meram pushing into the channel, Yaro picks a good angle and puts in a strong initial challenge. When the ball squirts free, Rosenberry is there to double team and boots it out for a throw in.

Hard work in the hold-up game with not much end product.

Nothing fancy with the finish, he just wanted it more.

He came off shortly after the goal and the Union slide Barnetta over to the right side.

Good all-around game from the captain.

Early on, he had a sneaky press and tackle that sparked a 4v3 counterattack. Later, he hit a curler near the edge of the box that just missed the top corner of the goal.

He got a primary assist on the slick ball that Rosenberry finished, but he also deserves a lot of credit for the backheel flick to spring Pontius and begin the sequence leading to Herbers' goal.

He was almost invisible in the first half before popping up with a headed effort on frame.

However, he was smart and calm on the opening goal, and simply waited for a teammate to arrive when he found himself in a tight situation. Instead of forcing a shot or playing backward, he spotted Herbers' late run and hit a simple square ball for the rookie to latch onto.

He only missed five passes in this game and turned in another savvy two-way performance.

He looked good defensively in the first half  but found himself in some advanced positions where he didn't seem to know what to do with the ball.

Later, on the Barnetta curling shot, he made a quick decision to just slot the ball in and let the attacker do the rest. It was a simple play that turned into a good scoring chance and earned him a key pass.

It would be nice to see more of that from Creavalle, but that's not his first priority. He really put his body on the line and battled defensively for the entirety of the 90 minutes.

Similar to Creavalle, he really fought hard in this game and endured a couple of brutal collisions.

There were two times where it seemed like he was ball watching, once in the first half and once in the second half, but he had a couple of really good wins and finished with an 80% successful tackle rate (4/5). He added double-digit recoveries and five clearances.

Assertive from the jump, he set the tone with two well-timed first-half tackles on Higuain.

Not many negatives from Marquez, who maybe could have bodied Adam Jahn on the Columbus goal. It seemed like everybody on the field was enthralled by the goal-line scramble and lost focus for a moment.

Smart and solid all game long.

This was the penalty shout at the end of the game that didn't get called.

He was able to get into advanced positions early on, which was made possible by Herbers' tendency to drift inside.

On the goal, it's a mature and veteran type of slashing run into the box. You don't see that from rookie strikers, let along rookie fullbacks.

Defensively, I thought he played a good game and had a big 1v1 win inside the box during the final stages of the game.

He had a big save early, when a cross made it to the far post.

Blake was commanding in the box and snagged mostly everything out of the air. The only quirky part of his evening was when he pulled back from a cross that he would normally claim. Tony Tchani whiffed on the header and Pontius had appeared to leave his mark and allow Blake to claim.

He got the secondary assist on the game-winning goal, then just missed Barnetta with an incisive ball a short time later.

The best part was seeing Alberg pause, then pick himself up and hustle back defensively after that sequence. It was a really positive show of body language and commitment to team defense.

He was asked to come in, relieve pressure, and be an outlet at the top of the formation.

No real issues for me. It looked like the linesman jumped the gun on the Crew goal call, so it would have been nice to see Chapman at least go over to the side and have a conversation about it.

The sequence with Barnetta on the ground, ball between his legs, was a bit goofy and probably included a foul.