Union 4, D.C. 0: Player grades and analysis for the best performance in a long time 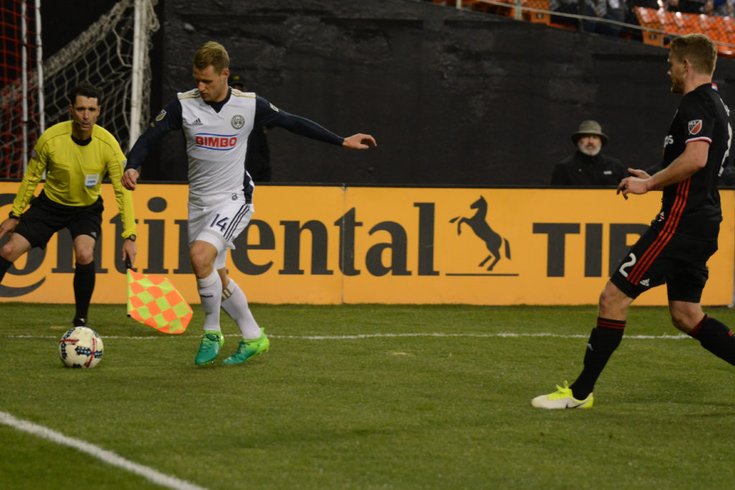 Fabian Herbers scored a goal of the week candidate in the Union's 4-0 romp over D.C. United on Saturday night.

Funny how things can change so quickly, right?

Here's a team that hadn't won a game in 250 days, now surging from three-straight shutouts against Los Angeles, New York, and D.C.

The Union haven't conceded a goal since April 22nd, when Montreal fought back from three goals down to steal a point at Talen Energy Stadium. That may have been rock bottom for the Union, but it also seems to be a turning point defensively, with Jim Curtin's team showing a new and improved organization and rigidness that was certainly borne from that result.

The Union are looking more like the squad we saw at the beginning of 2016. They're playing smothering team defense, creating smart chances going forward, and making themselves difficult to beat. There appears to be more chemistry in the starting eleven and Curtin has successfully shuffled personnel to create a winning side.

D.C. United, on the other hand, put in one of the worst performances I've seen from them in the last five years.

Medunjanin of the match

There are a lot of candidates for man of the match, but I'm giving it to Haris Medunjanin.

In addition to his game-winning goal (was Bill Hamid screened?), he really did an excellent job defensively, stuffing Luciano Acosta twice and recovering expertly to sit in that pocket in front of the center backs.

Last week, he logged a mere five defensive actions in the entire game, all of which were recoveries.

This week, he did this: 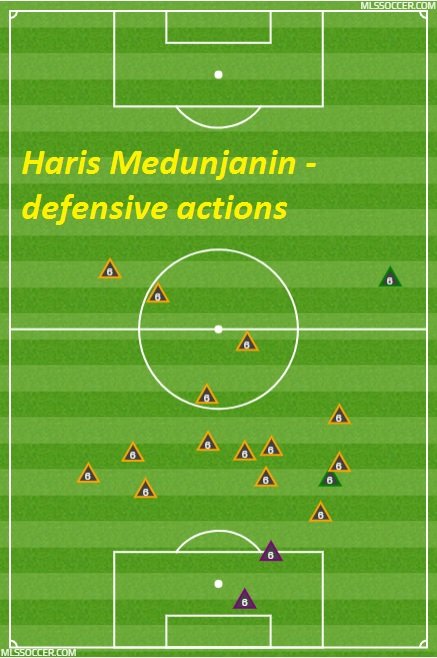 That's 18 activities, which is more than triple what he did last week. That chart shows 14 (!) recoveries, two clearances, and two successful tackles, the most important being a pair of wins on Acosta in open space.

This might be the most boring video clip I ever show you, but just watch it:

Medunjanin wins the ball. So what?

That's a lot harder than it looks. You've got Alejandro Bedoya slipping and taking himself out of the play, which gives Acosta space to run at Medunanjanin. Haris times it perfectly, wins it cleanly and immediately starts in the other direction. That's a wonderful play from a guy who we viewed as a defensive liability through the first eight or nine games.

Those wins were important in the flow of the game because I think Acosta was certainly frustrated leading up to his ejection, which didn't involve Medunjanin but was a clear retaliation tackle on the nearest player.

Philly limited him to this on the evening: 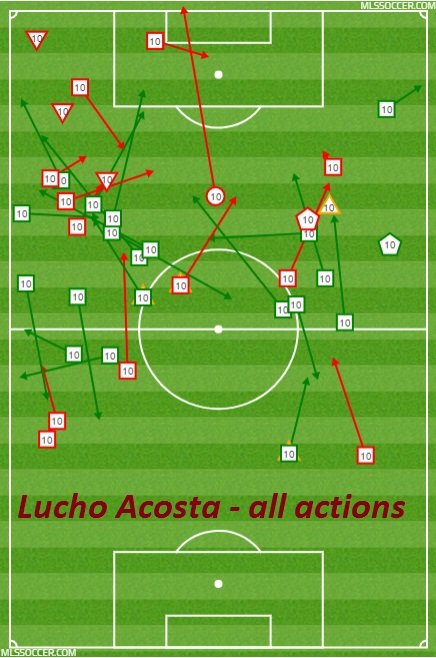 That's it. That's the entire thing before his 55th-minute red card.

Acosta had one shot on goal from about 36 yards out. He went 19 for 31 in passing with five final third entries. His dribbling attempts finished at 0% success rate (0 for 3) and he earned just one foul, which resulted in the fourth-minute yellow card to Fabinho.

I actually thought the most intriguing part of the game was Ilsinho at the number ten, which is the first time he's been used in that position.

We discussed it amongst ourselves online; maybe the Brazilian would be a good fit in a position where can be creative without having to track back to help out Keegan Rosenberry or Ray Gaddis.

Ilsinho's first game at the CAM was somewhat underwhelming with a lot of common issues popping up.

First, he didn't get a ton of touches there, which is the same when Roland Alberg or Bedoya play the position.

Second, you saw some frustrating decision making, summed up perfectly with this clip:

He starts off the sequence with a really nice hold-up touch, then Fabinho has an even better touch into space.

When the play breaks, there are two defensive mistakes, and Ilsinho pushes forward with numbers.

Instead of passing, though, he shoots from 19 yards out.

That's the kind of stuff that drives you crazy because the skill and sharpness are obviously there, but he has a habit of making those kinds of irksome decisions.

I did love the chip he played a little later on, where he waited for Bedoya to make an overlapping run into the corner. That play leads to a goal-scoring opportunity and showed what he can do when he does show some patience.

This is how Ilsinho finished in a 64-minute shift: 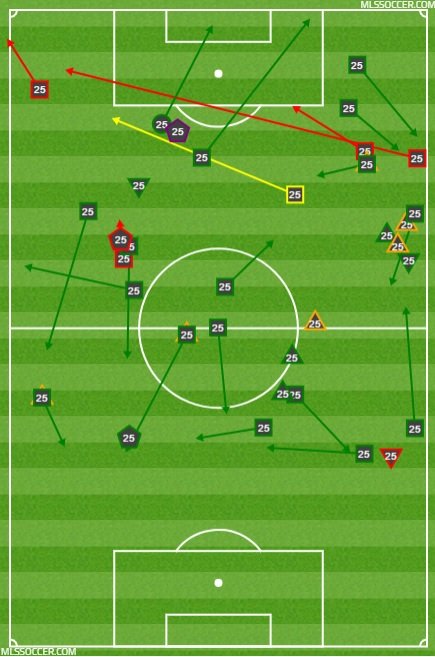 Philly still needs more out of the number ten position. That said, I wouldn't mind giving Ilsinho more time in that spot, especially with Chris Pontius and Fafa Picault playing better on the wings.

A well-balanced game for C.J. with strong hold-up play, some good defensive work, and a couple of sniffs at goal.

Three key passes and an assist on Medunjanin's goal, which was just a normal square pass, but it goes on the score sheet nonetheless.

There's potential here, but I feel like he didn't make the most out of the opportunity.

Easily his best MLS game, capped off by a beautiful curler into the top corner.

Picault looks like he has a better understanding with his teammates out there. He's also doing the two-way defensive work required of Union wingers.

Didn't have to do as much as he typically does in the defensive game since his teammates were on point for much of the 90 minutes.

He finally got on the score sheet with an assist on the final goal. There were a couple of nice late runs into the attacking third, and the only blemish I saw was the unnecessary yellow card he took in the 10th minute.

Did a solid job on Lamar Neagle and Taylor Kemp, who managed two key passes from his corner of the field.

Didn't put a foot wrong in 90 minutes. He also played a brilliant outlet pass into the right channel that resulted in a scoring chance.

Maybe he got lucky on the contact that preceded Acosta's red card, but it ultimately resulted in a man advantage.

Onyewu scored his first Union goal and contributed to a third-straight clean sheet while playing a homecoming game at RFK.

Union fans may have become nervous when he took the early yellow, but much credit to Fabinho for altering his game and playing it smart and safe for the remaining 86 minutes.

He probably had the tougher assignment (again) against Lloyd Sam, and while he conceded some fouls on his side of the field, didn't allow much of anything going forward.

Blake didn't have to make a save until the 82nd minute of play, when D.C. finally managed an on-target shot from 35 yards out.

Aside from that, he controlled his box well and had a couple of nice caught crosses.

Nice to see Creavalle on the field again, who might get some second-half minutes with Derrick Jones currently on international duty

I'd like to see him start on Wednesday or Saturday, just to give Sapong a break and keep him in good shape moving through the summer.

Yea, he called a tight game, but he also called a consistent game. He handed out cards early and he stuck to the precedent that he created.

As for the red card, I think everybody agreed, Union and D.C. fans alike, that Acosta was coming through in retaliation and didn't have much intent on actually winning the ball.