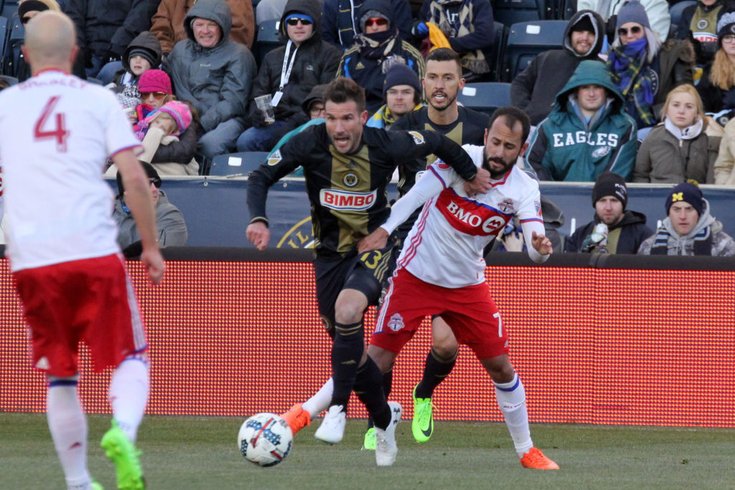 Two players were limited at Wednesday's Union training session while a third was absent entirely.

Ray Gaddis and Roland Alberg worked to the side to deal with the respective shin bruise and quad strain suffered during Saturday's 3-0 win.

Chris Pontius, who assisted on the second goal, missed practice with a knock of his own.

"(Tuesday) he took a shot," head coach Jim Curtin said at his weekly press conference. "I was reffing the game, so I guess I'm at fault, but Gooch – and it wasn't a malicious tackle by any stretch – but Chris swings to shoot, doesn't see Gooch and hits the bottom of his stud. It's bruised, nothing's fractured. They had an MRI done and I think he'll be fine for the weekend. He's a tough guy and I don't think a bad bruise will keep him out of D.C. especially, where he played a lot of years."

Curtin clarified that the bruise is on the front of the right foot and that Pontius has not yet been able to put on a shoe.

He also explained that Josh Yaro is getting closer to a first-team return, though the center back will likely start with Bethlehem Steel before jumping into the Union eleven.

Maurice Edu is not yet participating in team activities.

Richie Marquez and Ilsinho did rejoin their teammates for full sessions this week, following bouts of illness that may have actually been the same thing.

Ilsinho started showing symptoms in Los Angeles and was withheld from the Galaxy game. Marquez came down with the similar symptoms more recently and did not make the 18 against Red Bull. Curtin said the illness resulted in Marquez losing seven pounds but spared us the rest of the details.

Also missing from training was midfielder Derrick Jones, who officially got the call to play for the United States in the upcoming U20 World Cup.

Fellow homegrown Auston Trusty is not part of Tab Ramos' roster, but he traveled with the squad to train and serve as a defensive backup.

Jones only recently had his citizenship status updated to become eligible for U.S. national team selection. As you probably know, he left Ghana at age 14 for Philadelphia, where he found his way from the Junior Lonestar program into the Union academy.

"To get into the U20 team and represent our team, it's special to him," Curtin said. "You guys have heard me gush over all of the attributes he brings to the team. He also played great the other night. It hurts to lose him, especially with this busy schedule coming up, but, at the same time, the relationship between MLS and U.S. Soccer is one that's growing and everybody agreed to release their players. You look at the other kid who was on the field Saturday night, Tyler Adams, and you think about a midfield pairing of those two and it's pretty special. Derrick Jones and Tyler Adams are two guys that can do a lot of damage."

Official: Derrick Jones called up to play for @ussoccer in the U-20 World Cup

I wrote on Monday about C.J. Sapong with a focus on how his shooting numbers are up in 2017.

Following his hat-trick performance this past weekend, he spoke about being more consistent in that category and trying to get looks on goal, even while banging with center backs and doing the requisite target man work.

We asked him Wednesday if he's looking to create his own shot more often this season.

"I think I'm always trying to create space for myself," Sapong said. "I feel where I provide the most impact is being a hassle for players to defend against, holding the ball up for my team, and being tough on defense as well. Obviously, I want to get the goals, but I feel like I also need to focus on the things I do that help my team."

CJ Sapong of the @PhilaUnion talks about earning @MLS Player of the Week pic.twitter.com/tJ90QU9ZJO

Under the Table and Dreaming

Barring a playoff for Open Cup game, this will be the Union's last trip to RFK Stadium before D.C. United moves into a new arena next year.

Curtin visited RFK many times during a playing and coaching career that spans 15 years. While recalling his experiences there, he dropped this quote:

"There was always the smell of stale beer, or urine, or whatever it was from a Dave Matthews concert the night before, those hot summer months where it's 85, 90 degrees and it's kind of grimy. You go into all of these nice, new stadiums now, and it's probably ... I think 'time' (to leave RFK behind) is the best way to put it."