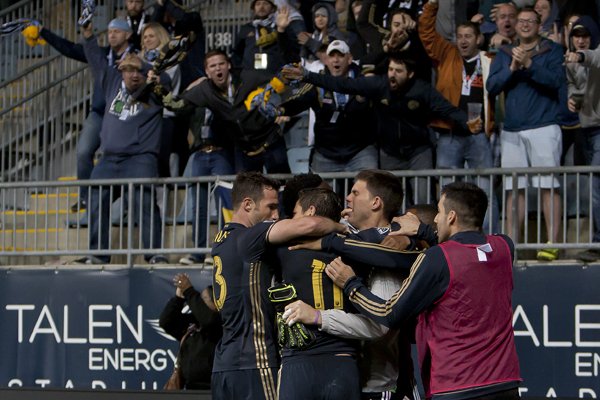 It looked like we might be headed for another drab draw on Saturday night, but something happened around the 70-minute mark that we haven't seen in some time.

The Union actually got stronger in the second half.

There was no caving to pressure, no slumping of the shoulders, and none of the mental fragility that we had seen over the course of a winless streak that ended at 252 days.

Instead, the game opened up, the Union attacked with purpose and punished New York when a critical mistake gifted C.J. Sapong the ball with room to run. A deflected goal put Philly on the front foot, with two more attacking movements slicing open a stretched Red Bull team and capping off a three-goal, 11-minute surge.

It's the easiest hat trick Sapong will ever score, with a tap-in header and well-taken penalty to finish off the game. His seven goals are now tied for a league-high and he looks like he's finally ready to evolve from a hard-working target man into a striker that can crest the double-digit mark for the first time in his career.

I thought Alejandro Bedoya had his best game of the season on Saturday night.

He was all over the field in the first half, winning tackles, recovering defensively, and shielding teammates. Bedoya finished with 17 defensive actions in a 63-minute shift in the number eight role. When a pair of injuries forced Jim Curtin into a double-switch, Bedoya then vacated that box-to-box position and moved up into the number ten spot. 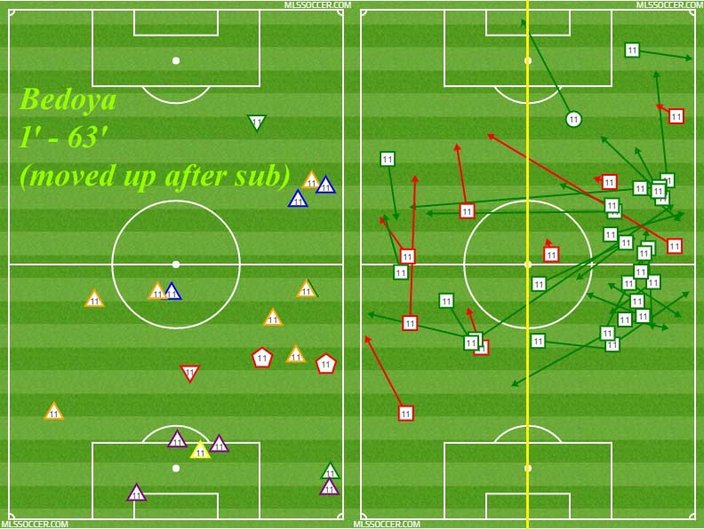 In a similar way, Haris Medunjanin, a lefty, seems to play more in the opposite direction as he opens his body to push forward on his strong foot. 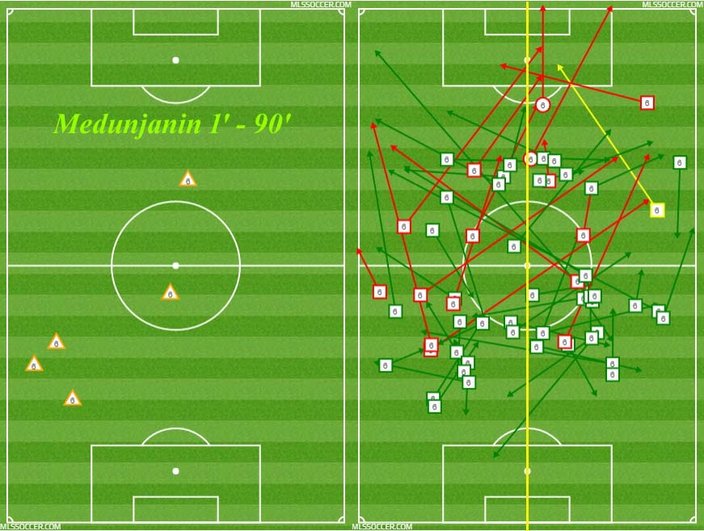 More importantly, you see that Medunjanin only logged five defensive actions in a 90-minute shift. That's a rate of one per 18 minutes. Bedoya was putting in a tackle, recovery, or interception every 3.7 minutes.

It's critical that Bedoya continues to play this way since he's essentially doing the defensive work of two midfielders. It's the same for Derrick Jones, who finished the game in that role and fluidly assumed defensive duties.

The onus is always going to on the Union number eight to bracket Medunjanin and also help the backline, which is exactly what Bedoya did for the first 63 minutes of this game.

Did the subs make a difference?

Some dispute on this one, with folks saying that the Union were better with Jones and Keegan Rosenberry on the field. That may be true, but I also think it was the product of a game that naturally became stretched as we approached the final 25 minutes.

I rewatched minute 63 to 74, which is the 11-minute span between Philly's double-switch and the first goal.

71' – Medunjanin for Pontius, one-two with Sapong, then crossed in for a header and brilliant Robles save

72' – Rosenberry forward, squares for Pontius, who fires over the bar

I think the takeaway from all of that is that both teams had some clear-cut scoring chances during that span. Blake did well to get down and save Kljestan's shot. Robles did better to keep Sapong out. Royer missed at the back post and Pontius had two efforts that he couldn't get on frame.

Jones had a couple of key defensive wins when he came on, but I didn't think he was doing much different than what Bedoya had done in the prior 63 minutes.

I think the more impressive thing was when Fabian Herbers came on, got into the corner, and earned a secondary assist with a beautiful back-post ball that Pontius was able to knock down. That was the best goal of the night, with the other two being the product of a ball hitting a hand and a ball hitting a foot.

.@BigAfrika88's second of the night, because he didn't wait enough time to let us tweet it before scoring again#JoinOrDie pic.twitter.com/Xl4nr321VE

Aside from the hat trick, which we wrote about on Monday, he still did his typical busy work in the hold-up game. There wasn't a ton to show for it in the first half and he didn't get any service until Pontius picked him out with that great cross.

I found it interesting that he finally earned a yellow card call against an opposing defender. It's no surprise that it came while battling with MLS newcomer Long, while a veteran international like Laurent Ciman was able to get away with four fouls and no caution for persistent infringement a few weeks back.

C.J. is on pace to destroy personal records, so Union fans should hope he doesn't hit that summer wall that has tripped him up in the past.

A typical Pontius game, he didn't get enough touches in the first half. The best contribution, I think, was a cutback key pass for Roland Alberg.

He popped up in the second half with another key pass on the cross and a clinical knockdown for a primary assist on Sapong's headed goal.

Nine games through the season, Pontius has three assists with his dome and leads Major League Soccer with 3.6 aerial duels won per game.

He had an early effort that was saved.

Afterward, he tracked back a few times defensively but started to fade before coming off with an injury.

He got behind the defense in the 19th minute but tried a deep cross instead of running 1v1 at a relatively inexperienced Michael Murillo. Earlier, he had a nice run on the right flank but left a hospital ball for Pontius to end the sequence.

Picault missed high on a few early tackles before finally taking a yellow card in the 25th minute. Ironically, that tackle didn't even have front-foot contact, it was a trailing leg that caused Felipe to go down holding his foot.

He finished with one blocked shot and lost the ball four times in a rather pedestrian shift.

In addition to his excellent box-to-box work, he had a really nice 19th-minute run where he took the ball in transition, pushed into the final third, cut back onto his left foot, and tried a curler.

Just missed on a cheeky free kick effort about nine minutes in.

He had a nice play to pick out Pontius on the cross leading to the Robles save. His set piece delivery was slightly off in this game, but Medunjanin played his typical game, shuttling the ball around and giving orders from his deep-lying midfield position.

Gaddis had the more difficult matchup, with Kemar Lawrence and Daniel Royer coming down his side of the field.

There was an early scoring chance where it looked like he had position on Lawrence, who was able to get behind him on the goal line. Later, he shielded the ball out of play when the left back got to the end line.

A few times he got forward into good positions, once for a cross that was cut out, and a second and third foray that both earned corner kicks. A fourth effort resulted in a hand ball and free kick.

It's a shame he had to come out injured, after sitting on the bench for an entire year and only winning back a starting job just three weeks ago. The injury was suffered on a 50/50 ball where he just missed late and caught Lawrence about shin-high with a boot.

He passes the ball like a veteran and shows calmness that you never see from rookie defenders.

Elliott also committed a perfect tactical foul to break up a scoring chance in the 66th minute, which proves to me that he has a high soccer IQ and sees the game at an advanced level.

Played a solid game against a wasteful Bradley Wright-Phillips, positioning himself well and reading pretty much everything that came his way. There were only a couple of occasions where he found himself in space with the striker, and he played those sequences well.

He did a really nice job against Alex Muyl, who wasn't able to do much of anything outside of a bicycle attempt on an in-box scramble.

He had an awkward punch early on a Felipe cross but did enough to make the save and smother.

From that point on, he was totally sound, playing like the all-star goalkeeper we saw in 2016.

He had a similar sequence to Gaddis when Royer was able to get a step on him and shank the ball just wide of the far post.

Later, he left Long unmarked on a recycled set piece, leading to a free header that just missed the far post.

He did get forward a few times in an open second-half.

Jones came in for a solid, 27 minute defensive shift. He positioned himself well and also had a couple of dribbles in the attacking half, one where he skirted two players and tried a final ball for Sapong.

His second touch of the game was the brilliant far post ball for the second goal. When you hit a cross like that, it makes the secondary assist a statistic worth keeping.

No issues with his calls.