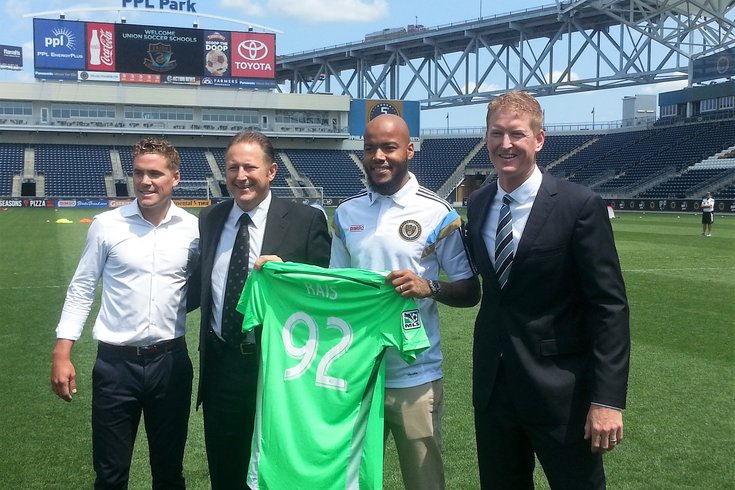 Union fans are probably familiar with "The 90th Minute," which is the team-produced radio show that airs weekly on 610 WTEL.

Hosted by club employees Carl Cherkin and Dave Leno, it's obviously not a place for critical analysis.

What you do get are some good interviews with Union players, a recap of weekly MLS action, and a guest or two that previews the upcoming match.

The interview began with some fluffy discussion about Saturday's match. It took a weird turn when Cherkin brought up the topic of physical play between the two teams, resulting in Messing randomly ripping Union technical director Chris Albright and sporting director Earnie Stewart.

Carl Cherkin: "Alright, 30 seconds left, one quick question, one part of that style is that there's a lot of physical play when you're pressing high. Last year, I remember Sacha Kljestan came into Talen Energy Stadium and he was pushing people around, almost laughing. If I were on that field, and other people I know were on that field, in any different sport, somebody would have taken a shot at him. He can't get away with that, and I can't imagine Philadelphia Union is not keenly aware of that coming in. What do you think about that?"

Shep Messing: "Do I have time to respond to – you had a lovely fan who wrote an open letter to Jay Sugarman that I read today, do you have time for me to give a response?"

Messing: "Listen, I love Philly. I love the city. I love the market, I want them to be successful, but talking about Red Bull and talking about Philly, I'm giving Jay Sugarman a pass. He spends more money this year, 2017, on the roster than Red Bull. Total cap salary for Philadelphia: $6.2 million. Total cap salary for New York Red Bulls: 5.8. It's not Jay Sugarman's fault, it's not Jim Curtin's fault. It's Earnie Stewart and Chris Albright. Albright, since he's been in charge of domestic scouting for two years, has been a failure. Earnie Stewart has come into the market, and I like Earnie, and I hope he succeeds, but he's bought overpriced Dutch players, he doesn't have his finger on the pulse of Major League Soccer. Jay Sugarman is spending more money than New York Red Bull and New York Red Bull has a far better team. I'd like to see Philadelphia get it right, but the onus is on Earnie Stewart and Chris Albright."

Cherkin: "Alright Shep, thank you very much. We appreciate your input and we will see you down the road."

Messing: "Back to your point – then I'll let you go – yes, it's a battle. Sacha Kljestan was knocking people around. I expect it to be a war on the weekend."

"It's not Jay Sugarman's fault, it's not Jim Curtin's fault. It's Earnie Stewart and Chris Albright. Albright, since he's been in charge of domestic scouting for two years, has been a failure."

Cherkin: "Alright buddy, thank you very much. Interesting point, and I will say this, Earnie Stewart has been here 15 months. He's made some calculated decisions and not all of them have turned out as they may have liked. Same thing with Chris Albright. The entire technical staff works extremely hard to try to get this thing right, and I do believe that if people are patient, they will be rewarded. We'll leave it right there."

(Cherkin does a promotional read before tossing to a commercial break. Five or six minutes pass, then he revisits the discussion before wrapping up the show.)

Cherkin: "I just wanted to add a little footnote to our conversation with Shep Messing. I was a little disappointed, quite frankly, (as) a guy who I've known a long time, when he asked for some time to make a comment and I thought he would go initially where he did, in support of, you know, ownership and the chairman Jay Sugarman of the Philadelphia Union who has been very clever in the way he built this organization and heading towards the infrastructure portion of a plan really, rather than just throw money at designated players like some others have had with absolutely up and down success. Some have been successful and some have been abject failures, but to lay the blame at the foot of Earnie Stewart and Chris Albright who are part of this building the infrastructure, building the the academy, building Bethlehem Steel and the path to the pros is a bit unfair, and it's still early so I'm very surprised."

I'll provide you with some context.

Messing is very close with former Union CEO Nick Sakiewicz. The two have known each other for awhile now, going back to Sakiewicz's time at the helm of the New York/New Jersey MetroStars and probably even before that. Messing has been a sounding board and confidante ever since.

There's no doubt in my mind that Sakiewicz, who was not entirely fond of the performance of his technical staff, shared those thoughts about Albright in private conversation with Messing. Sakiewicz was very "hands on" with the player-personnel side of things, as you well know. In this case, his opinion probably manifested itself publicly as information laundered through a colleague.

To his credit, Messing might not be wrong. A lot of Stewart's signings have not yet panned out, and no one really knows what specific role Albright is now performing as a technical director serving under a legitimate sporting director.

And to the credit of Albright, it's not like he had much help or direction from the start. He retired from playing and immediately took over a staff position with zero scouts, zero resources, and a meddling CEO.

Most people would be set up to fail in that situation.

I don't know if we can draw any conclusions from that exchange, but I have a pretty good feeling that Shep Messing has made his last appearance on The 90th Minute.