The Philadelphia Union roster is beleaguered with regression and imbalance 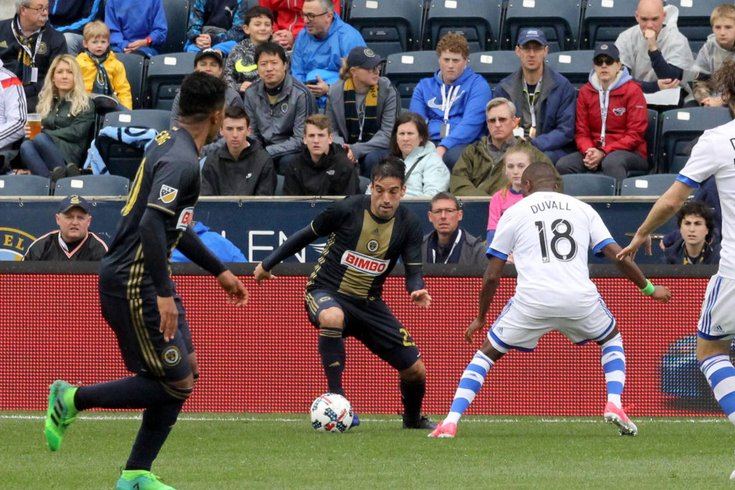 Ilsinho has zero goals and zero assists in his last 13 starts.

Remember how the Philadelphia Union did so well in the 2016 draft?

They got a stud center back, an all-star fullback, and a promising young forward.

Sixteen months later, the center back is injured, the fullback is benched, and the forward is out of the starting lineup entirely.

It's strange when you think about the obvious upside possessed by Josh Yaro, Keegan Rosenberry, and Fabian Herbers. Yet here we are, on May 2nd, 2017, with three of the more important players on this Union roster currently playing no role at all.

Yaro will, of course, be back on the field eventually. He's suffered five injuries in one year and he's the future at right center back. Rosenberry hit a sophomore wall and will return after a mental break. Herbers is a more unique case, and we'll start with him as we explore the mess that is the Union roster.

I'm surprised that he isn't getting more minutes, considering the fact that he came on strong at the end of last year as a right-sided midfielder.

He started his rookie season as C.J. Sapong's backup, then found a midfield role and finished with three goals and a team-high seven assists.

Fabian had 13 straight starts from the end of last year through the first three games of 2017. He hit the bench in week four and hasn't been the starting lineup since the Orlando loss.

He's been stuck behind Chris Pontius, Ilsinho, and now Fafa Picault on both sides of the field. Herbers played for Bethlehem Steel last weekend and saw one minute of action as a stoppage time sub in the scoreless draw with Los Angeles.

For what it's worth, Herbers, Pontius, Ilsinho, and Picault have combined for zero goals and three assists in 1,402 minutes this year.

The door is wide open for two of those wingers to step it up.

This time last year, Yaro had just grabbed the starting RCB job as the Union rumbled through an eight-game unbeaten streak.

He hurt his shoulder in game six of that run, then found himself in and out of the lineup for the rest of the season.

After undergoing successful surgery in early February, Yaro was given a three-to-four month projection for returning to the lineup. Three months puts him in line to start in D.C. on May 13th. Four months takes him all the way through the June international break.

If you were going to bench him, then I guess this was the time to do it.

I was surprised that he was out of the lineup for a second-straight week, so maybe this Saturday against Red Bull is the time for him to return.

Ray Gaddis has been a capable backup on the right side of the defense, but Rosenberry is the future at that spot, so you put him back on the field when he's had a chance to clear his head.

Tribbett was third on the center back depth chart and started in last year's playoff game.

This year, he's played once for Bethlehem Steel.

Creavalle may have been the best player on the field in the playoff loss to Toronto.

Creavalle entered the season with a minor injury and has played zero minutes this year at a guaranteed salary of $138,000.

Zero appearances in 2017 for Davies.

It's currently one of the worst trades in franchise history.

$518,000 guaranteed for a player with zero goals and zero assists in his last 13 starts.

$508,000 guaranteed for a guy who doesn't fit the system and has already been replaced by Sapong.

He has two shots in 186 minutes, but it's not like he's getting much help or has even had enough time to prove himself.

He was brought in to push Fabinho at left back but cannot make the gameday roster.

Jim Curtin says Giliano Wijnaldum “has been improving,” and Ray Gaddis will not be playing left back.

Mo hasn't played since 2015 and is recovering from his second debilitating injury in as many years.

C.J. is scoring goals and working his ass off up top.

Is this finally the year he reaches the double-digit mark?

Or will he hit a that summer wall and encounter the same issues that plagued him towards the end of 2016?

He's played some solid minutes for the Union this year, but offers nothing going forward, so he sits on the bench while Alejandro Bedoya and Roland Alberg start.

If you want to move Bedoya to the wing and start Jones at the eight instead, that's fine by me.

He started the season out of position and finally got into a preferred role a few weeks ago.

Bedoya is playing hard and doing some beefy two-way work, but the reality is that you're paying $1.1 million for a Swiss army knife midfielder.

When you look down the MLS salary list, players in that low seven-figure bracket include Bradley Wright-Phillips, Romain Alessandrini, Federico Higuain, Josef Martinez, and Fanendo Adi.

Yea, he's not going to give you defensive mettle in the midfield, but his passing is excellent and his set piece delivery has probably been the team's biggest weapon in 2017.

Let's not pretend like taking him off the field is going to solve any problems.

Who are you going to replace him with?

I've been impressed with Elliott's passing ability and calm style of play. Axel Sjoberg is the model comparison for the West Virginia rookie, and I think the best case scenario is that he stays in form and pushes Yaro at RCB when the latter returns to the lineup.

He went from completely out of the 18 to a starting job in two weeks.

We'll see if he gets another shot on the left this weekend.

I think people forget that Ray won the starting right back job from Sheanon Williams in 2015, who was then traded to Houston.

The irony is that Ray was played out of position for years, and while he never became a fullback who could bomb the flanks and drive in crosses, he did adapt well enough on the left side to become a legitimate backup there.

That makes his bench value high, since he's Rosenberry's backup and also someone who can spell Fabinho if necessary. Wijnaldum isn't making the 18 in that scenario, but you're also not putting two fullbacks on the bench, which Jim Curtin has publicly explained.

Is there trade value for Gaddis?

But that's fine, because Ray's diversity makes him a depth asset on this roster.

I'm pretty sure you're supposed to do that in the reverse order, but that's what happens when you're trying to clean up a Nick Sakiewicz mess and have no USL team to utilize.

I think he's filling his role the way it was envisioned.

He's a low-cost, veteran backup who made a few starts and has now ceded his position to a younger upstart.

He's been fantastic in practice but he's not ready yet.

They've tried him as both a number ten and number eight with Steel, so give me a larger body of work there before we move forward.

Three players who really improved in 2016, I feel like they've plateaued a bit this season.

Fabinho did play a great game in Los Angeles on Saturday, and Blake had a key first-half save.

Marquez got a $70,000 raise this season. There's no reason he can't be as good as Steve Birnbaum, Tim Parker, or even Matt Besler. This should be a breakout year for Richie as a defensive leader.