Defend like hell and play for a point: Grades and analysis for Union 0, Galaxy 0

I'll admit it, I started to doze off halfway through Saturday night's scoreless draw.

I reffed two games in the morning, played one in the afternoon, then drank three beers before the 10:30 p.m. kickoff.

The irony is that sometimes even positive results can put us to sleep, and this was one of them.

Philly executed a slopfest on the road, defending like hell and stifling a Los Angeles team that has really fallen off in 2017.

And if the Union weren't riding a 16-game winless streak, everyone would be sitting here talking about what a great result this was.

Did anyone see this team going out west, getting a clean sheet, and stealing a point?

That's a positive outcome for any Eastern Conference team, especially the one that currently occupies last place.

The man of the match

The Union left back played his best game of the season and looked like the much-improved player that we saw last year.

Fabi had 21 defensive actions in this game, which is a lot. For comparison, his counterparts Ashley Cole and Bradley Diallo logged 11 and 17 actions each. Ray Gaddis, on the other side of the Union defense, only had 11 actions. 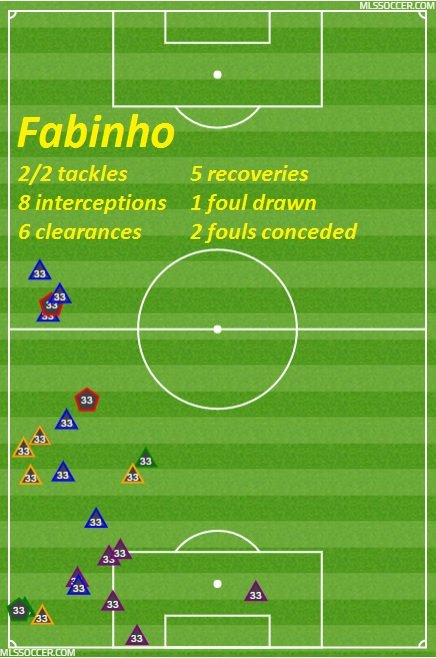 Fabinho did a nice job against Romain Alessandrini, who finished with one shot (on goal), zero key passes, and a 20 percent mark on five crossing attempts. On the other side, Emmanuel Boateng had two key passes and two shots on goal.

It was a bit of a different look for Fabi as well since he had Fafa Picault playing in front of him instead of Ilsinho or Chris Pontius. The Union do ask their wingers to do a lot of two-way work, and Picault dropped in to finish with one clearance, one interception, and one tackle won. Pontius, playing in front of Gaddis on the other side of the midfield, had four recoveries and a clearance.

On this sequence, I felt like Fabi did a nice job of trying to get on Alessandrini with his back to goal.

Sure, the play devolves into Picault being unable to clear, but it's good work by Fabinho to recover, shepherd to the endline, then poke the ball free after losing out for a second time.

That's what you want to see from your defenders. Even if Alessandrini gets the better of Fabinho twice in one sequence, you see two separate recovery plays in the span of 10 seconds.

Out of the 18, into the starting lineup

It was a grand total of two weeks ago that Picault found himself out of the 18 entirely.

With Ilsinho dealing with some sort of illness, and Fabian Herbers a bit down on the depth chart these days, the door was open for Picault to make his first Union start.

He played on the left in a matchup against MLS newcomer Bradley Diallo, which was a situation that the Union identified and tried to exploit.

Here's what Jim Curtin said about that after the game:

“On the night we wanted to try to get in behind their right back. They had the kid (Nathan) Smith in there last week, and they kind of juggled things in the back, and played Diallo back there. The goal all week was to win balls and try and use his speed to get in behind the right side. I thought he worked very hard defensively. A couple little of half-chances to maybe get in behind, but you can see that his speed brings a little bit of a threat to a back line and makes them drop a little deeper. Overall though for a first start I was very happy with Fafa’s work from minute one until he was subbed. He emptied his tank, and did a good job for us."

Watch this passage of play to see exactly what Curtin is talking about:

I felt like this was one of the Union's best movements of the game.

It starts with some calm buildup out of the back, with Haris Medunjanin feeling pressure and bringing it back to Jack Elliott, who hits a beautiful pass to Roland Alberg. Alberg's first touch is excellent, and he cycles it wide to Fabinho, who then plays Picault into the seam. The first-time cross just misses Sapong, who overruns it, then it falls for Pontius to try a left-footed curler with Alejandro Bedoya asking for him to leave it instead.

That was really pretty stuff, and it matches what Curtin said about their intentions to get behind Diallo.

I mentioned above that Picault didn't log a ton of defensive actions, but he did do a good job of working back to help Fabinho with Alessandrini. The whole point of the game plan was to lock it down defensively, not give up anything cheap on the road, and try to hit LA with these kinds of sequences.

He finished 3/9 in passing attempts with zero shots, five fouls drawn, and one conceded.

That's life on the road as a solo striker and that line shouldn't be surprising when you consider the game plan and the way the Galaxy held possession.

Later in the second half, he was pushed to the wing and helped lock down that side of the field defensively.

He did a lot of defending in this game, sinking in to help Gaddis with the combination of Boateng and Ashley Cole down the left flank.

In one sequence, he found himself 1v1 with Boateng on the edge of the area and did well to win a goal kick.

The irony is that Pontius was your leading goal scorer last year. He does a lot of two-way work, but you want him on the edge of the other penalty area, right?

I felt like he had two good hold-up touches in the opening ten minutes, then I looked at his chart and saw that he only completed six passes in the LA side of the field. Three went backward, two forward, and one sideways.

He had one shot attempt, which came on a Bedoya cross, and while he didn't catch the left-footed volley cleanly, he did hit it into the ground and force a tricky save.

Otherwise, just not enough touches for Alberg, who became rather lost out there.

They tried to pick him out four times in the opening 15 minutes, so the commitment to the game plan was there.

I also saw two opportunities for him to attack the ball in the air, one on a cross into the box, and another on a far-post pass from Medunjanin, but both resulting plays were underwhelming.

Let's see a few more starts to see if he can deliver more than Ilsinho. 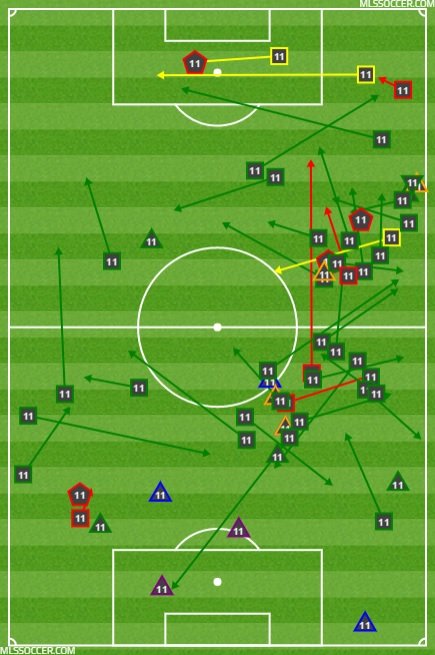 His first touch was a shank into traffic that forced a save from Blake.

Afterward, he settled in and played his typically gritty game.

Continuing the theme from the last two weeks, most of Bedoya's actions as a number eight are taking place on the right side of the field.

You see three key passes from the right side, along with most of his distribution and defensive work. Two of those key passes are legit, while the third, I believe, lead to a long range effort from Medunjanin.

I count 12 actions on the left and 46 on the right, which I think is just a combination of him being more comfortable over there, and also the fact that Alberg has been popping up on the other side of the field to receive the ball while playing as a ten. Medunjanin will cover both sides of field pretty evenly.

If they ever wanted to try Bedoya as a winger, he'd be good on the right, considering the patterns we see in this play and also the fact that he started his career out wide.

There were a couple of instances where he hit that far-post ball for teammates to head across the box. They've had success with that earlier this year, so good on Medunjanin for continuing to try it.

I also didn't mind the couple of tries from long range. Why not? Union players are always hesitant to shoot from that distance, so have a go. He forced Brian Rowe into a tough save from about 25 yards out.

Medunjanin also had a few more defensive actions in this game, and his work rate was good.

The dead ball he hit just before halftime was maybe a few inches from finding Elliott's head.

A tricky matchup against Boateng, who did a bit better when he was sinking inside and allowing Cole to move up the flank.

That resulted in Pontius dropping and covering in a wider area.

Overall though, not a bad game from Ray, with Boateng getting stuffed by Blake on one through-ball and then trying his second shot from the other side of the field in the second half.

Calm and collected in the back, he looked very smooth out there.

Smart tactical foul on Dos Santos about 25 minutes in. He didn't get a card for it, which is even better.

There was a hairy moment around the 55th minute when he got screened and grabbed by Jermaine Jones on a corner kick, which resulted into some arguing with Pontius. It happened again about five minutes later.

We've seen Marquez have issues with dead ball pick plays before. It usually happens when he's marking an experienced who knows how to pull and leverage without the ref seeing it.

A man of the match performance with a goal-saving tackle in the 66th minute.

Good first-half save on Boateng, then alertly came off his line to head clear about 15 minutes later.

Also got some help from the posts on this play:

A defensive sub, Jones added some mettle when the Galaxy started to threaten in the attacking third.

Twelve minutes to run around up and hope a ball comes your way.

Nothing to analyze in one minute.

He called a fair enough game.

I would have carded Alessandrini for the tackle where he caught Fabinho with the studs coming through the ball.