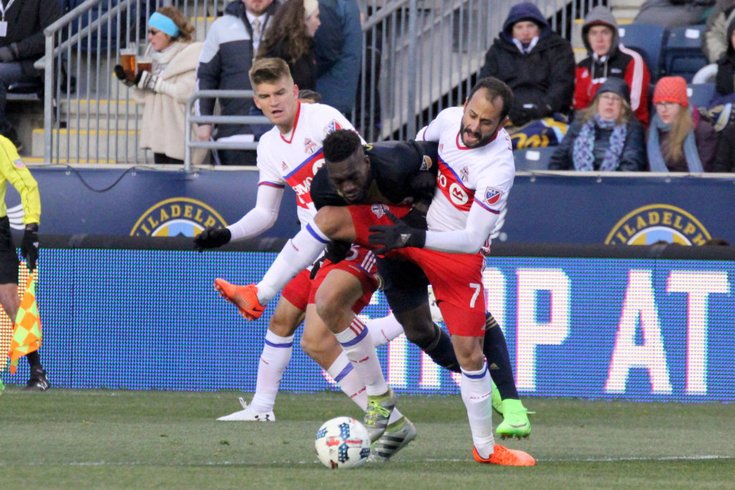 C.J. Sapong tied a franchise record when he suffered seven fouls in Saturday's 3-3 draw with Montreal.

Jim Curtin's weekly press conference was moved up to Tuesday this week to accommodate an early trip to Los Angeles.

Or, if the team flies United Airlines, they might be "re-accommodated."

Anyway, the Union hope to break a 15-game winless skid when they play the Galaxy at 10:30 on Saturday night. Maybe it makes sense to get out of Dodge and try to re-focus on the road.

I'll get to the presser in a second, but the most interesting news of the day was the release of new salary figures from the MLS player's union.

Here's what the new crop of Union players are earning:

The Jay Simpson number obviously jumps out. That's a lot of money for a fourth-division English striker who doesn't even fit the system.

For comparison, Ola Kamara is making a little under $500k and Nacho Piatti is still on $450k. Patrick Mullins is around $114k and Marco Urena makes $289k.

In fairness, Simpson really hasn't had a chance to prove himself. He's been stuck on an island, or the bench, with just 174 minutes logged in seven games. I'll withhold judgment until we make it halfway through the year, but it's one of those signings and dollar amounts that probably isn't going to add up.

It begs the question – why spend $465,000 on a TAM-level striker when an extra $600,000 gets you a true, DP striker? If an injured Maurice Edu wasn't eating up half a million dollars, maybe it would have happened.

As far as the other players, Onyewu is a veteran steal at 65 grand. Giliano Wijnaldum sitting on the bench doesn't look so bad at $78k. Haris Medunjanin is making less than Tranquillo Barnetta and is worth every penny at $505,000.

The problem is the salaries of Edu, Charlie Davies, Brian Carroll, Warren Creavalle, and other bench sitters who are eating up around a million dollars. Ilsinho is also underperforming at $500k, along with Chris Pontius at $400k.

There are a lot of good things going on with the salary list, but there are some headaches as well.

Last week in training, Keegan Rosenberry practiced with the second team while Ray Gaddis ran with the "starters."

We were told it was an experiment at the time, and maybe it actually was, but when Saturday came around Gaddis was in the starting eleven with Rosenberry on the bench.

It's been a weird few months for the second-year All-Star, who earned a call-up to the U.S. January camp, then got sent home early, which is typical for a first-time national teamer.

"Keegan is obviously a great player for us," said Curtin on Tuesday. "He's a guy that played a ton of minutes and never missed a minute since he's been here. I thought it was important for him (to sit). He's been a little bit caught between two minds in terms of attacking and defending and maybe he's lacking a little bit of confidence. At the same time, he's still giving maximum effort. I had a talk with him, and it's a hard decision, but in some instances, it's good to mentally and physically – with the stress of always playing – that it's good to sit back and watch. That sounds like a coach talking, but I've been in those moments (as a player). You're disappointed to have to watch but it can also relight a little bit of a fire and give you a little bit of a break. If we're gonna get out of this thing, and we talked about it, he's going to be a big part of us fighting our way out of it."

Curtin was further asked if he felt like Gaddis might be an option at left back with Rosenberry starting on the right.

"Ray has played there before. Now we have two guys in each spot, two on the right and two on the left, with Giliano, who is still improving. Ray we see as a right back. That would be Keegan and Ray on the right, whichever one we choose for the game, then Giliano and Fabinho on the left."

Mug or be mugged

I actually think he broke the record, which I'll explain in an article for Wednesday.

Laurent Ciman was on the giving end of four of those fouls, yet didn't receive a caution for persistent infringement. Sapong, who is among the most fouled players in the league, still seems to be getting raw treatment from the refs.

"He gets killed in games," Curtin said. "It needs to be said that C.J. is playing well right now. I think he's playing some of his best soccer. He's worked his tail off. He has an unorthodox way of playing, so referees are a little unfair to him I would say..."

PhillyVoice: "Is that the product of being a big center forward? If he plays hard and also concedes fouls, is that why he isn't getting more calls in his favor?

Curtin: "I think there's a little bit in that. Because he's physical, he plays the position differently. But there are physical forwards in our league that, like you said, have a five or six million dollar backing. I won't use names, but there are some good, big, physical forwards out there that get more calls and more respect than C.J. does. That's clear. I think his way of playing gets under a center back's skin, for sure. He's worked for every inch, every goal that he gets. There's no easy C.J. Sapong goal, you know? Everything is through his work and his grit and his fight. I give him a lot of credit right now because he's done a good job trying to give us life."

Congrats to C.J. Sapong for tying the Union record for "most fouls suffered in one game" pic.twitter.com/GZkBaAJKm3