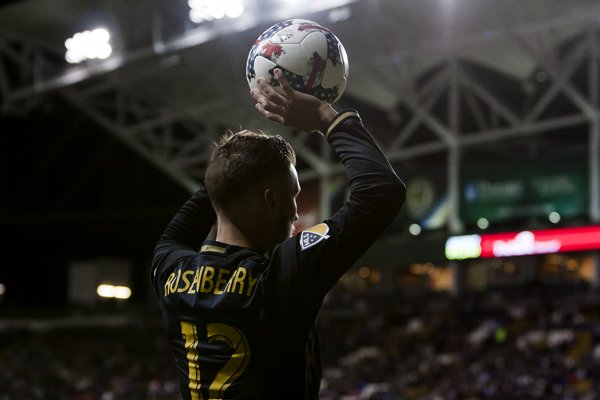 Keegan Rosenberry has spent the last two weeks on the Union bench after beginning his professional career with 41 straight starts.

Maybe it's a "sophomore slump," but the right back's rookie campaign was always going to be difficult to replicate.

Here's a player that lead the league in minutes, made the All-Star Game, and then earned a call-up to the U.S. national team in January. His rookie of the year bid was derailed only by the high-level performance of Seattle striker Jordan Morris, whose highlight reel of goal scoring was always going to look better than that of a fullback on a blue collar Philadelphia team.

Rosenberry has looked a bit "off" to start the season. His crossing and passing isn't as sharp as it usually is and he's been stuck in a sort of positional purgatory, sometimes getting too far up the field and sometimes being glued to the halfway line. He's also had to learn how to play next to a rotating cast of right-sided center backs, two of which are new to the team in 2017.

The Lancaster native spoke with PhillyVoice this week about his early season struggles:

PhillyVoice: You watched the last two games from the sideline. What's that been like for you?

Rosenberry: "It's been a change of pace, obviously. It's been awhile since I've had that perspective, looking in (from the outside). I think, hopefully, I'll be better because of it. That's always the goal as a player, to take whatever comes at you and handle it the best you can. I think we're making progress as a team. I think it was a good defensive effort in LA and hopefully, that carries over to the home game coming up."

What was the discussion like when the coaches told you that you were coming out of the starting lineup?

"It wasn't easy for me to handle, obviously. It was a discussion we had a couple of weeks ago. To my discredit, I couldn't disagree with what they were saying, being caught between attacking and defending. I was getting beat inside, as opposed to outside, a few too many times and it wasn't that it was resulting in goals or glaring mistakes, but when I'm not performing as well as I was last year, then it's time to take a step back and recharge the batteries a little bit. Hopefully, that's the case here and myself and the team can be better because of it."

Why do you think you were performing at that level?

"Well I think it's easy to look at players and say they haven't been performing well when the team isn't getting results. Everything else stands out when you look at losses, ties, however many in a row that it's been now. Like I said, I don't think it's been a huge drop-off, but it looks a little bit worse when the team isn't getting results and it's easier to pick things out from each player."

Ray Gaddis supplants Keegan Rosenberry at right back. Everything else the same. #PHIvMTL https://t.co/LnoBfvtHpD

Fans and media, we talk about the idea of you playing next to Josh Yaro versus Oguchi Onyewu or Jack Elliott. Does it really make much of a difference - the concept of the guys around you - when it comes to positioning and performance?

"Yeah, you can talk about a variety of things – the interchange at right mid, the interchange at right center back – there are differences. It's difficult, I think. When they made the switch with Jack, I think I only got one game to play with Jack and figure that out. So there are differences with whoever you play with. Josh has a little more speed. Ken (Tribbett) and Jack like to play a little bit more and Gooch is a little more defensive-minded. That all takes a little bit of time to adjust to and that's difficult when there are changes week-in and week-out."

"Is it more about familiarity with the guys around you, or their individual traits and style of play?

"I think it's a combination of both. I think, throughout the week when you train with these guys, you figure out their tendencies and you see how they like to play. For instance, Jack can really pick out a pass, better than a couple of others can. He likes to distribute a little more and can hit that weak-side switch to the other outside midfielder. It's little stuff like that that you can read and be a few more steps ahead in preparing for a mistake, or the other team cutting out a guy with a pass. It's little, nuanced stuff that's hard to see maybe from a third-party perspective, but when you're used to playing with a guy and (trying to adjust) it's frustrating."

Last year you played every game. You went to the All-Star Game. You got a national team call-up. Coming into year number two, were expectations set at a level that was going to be impossible to match? Is there anything to that train of thought?

"No, not for me. Personally, if I start to think that way, then it's only going to end poorly. There was a little bit of luck that fell into last year, and a lot of things that I was fortunate with, coming into a team where I could get playing time, and the way we started last year with results that helped me get to the all-star game. I think all of that helped me get to January camp as well. There were things that fell into place, but I want to keep that standard and try to outperform it every year. It doesn't look that way now but I think it's a long season. You look at the table and there's something like six teams that only have two wins, so if we put a few wins together then we're right near the red line again. As frustrating as it seems right now, I think we're a couple games away from putting a run together and being where we need to be."

Here's how the #MLS Rookie of the Year voting broke down — Rosenberry nearly won the media contingent but Morris dominated among players: pic.twitter.com/IPmTmm4tcr