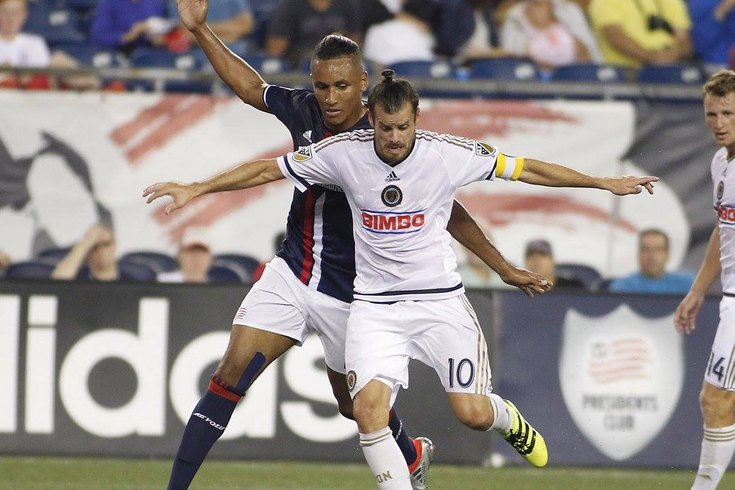 Tranquillo Barnetta returned to his attacking midfield role in the Union's 4-0 win against the New England Revolution.

The Philadelphia Union picked a good time to play their best game of the year.

This was a four-nil shutout that ended a four-game winless streak dating back to July 17th. The Union jumped into fourth place in the Eastern Conference and are now seven points clear of the final playoff spot with ten games to go.

It was also just the second road win of the season for Philly, who hadn't been victorious away from Chester in five months. You'd have to go back to March 12th to find the last time that the Union had come home with all three points. Since that 2-1 win in Columbus, Jim Curtin's team had gone 0-6-4 on the road over the course of 154 days.

The clean sheet, Philadelphia's fifth of the season, stopped a full month of defensive bleeding. The Union conceded 11 goals during that winless streak, which included a 5-1 loss in Montreal.

Alejandro Bedoya made his debut in this Union game, and we wrote about that on PhillyVoice over the weekend.

One of the most important things about that addition actually doesn't have anything to do with Bedoya. It's the positional shuffle that allows Tranquillo Barnetta to move back into the number ten spot.

In prior weeks, Barnetta was asked to fill Vincent Nogueira's role in a deep-lying number eight position. Barnetta was OK in that role, but it just wasn't his best position on the field. The Union were shaky defensively and had trouble moving the ball between the lines. Bedoya is more capable of keeping the shape and facilitating from inside his own half. 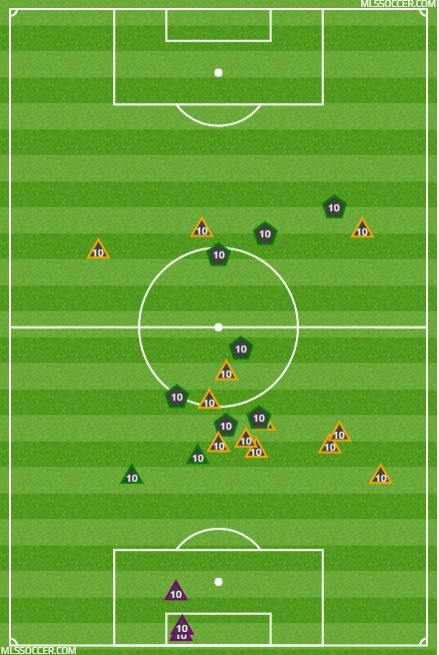 Barnetta is actually better defensively when he's closer to the opponent's goal. Sounds weird, right? Take a look at his event chart, with no offensive statistics applied.

Those are better numbers than he was putting up in a more defensive role.

For starters, Barnetta is the smartest presser on the Union roster. He's very good at reading cues and making high-percentage challenges on the ball. He's better at cornering center backs and opposing midfielders when he knows he has help around him.

When Barnetta makes 12 recoveries from the number ten spot, that's evidence that he's tracking back and helping in defense. All three of his clearances came on set pieces delivered to the Union box. The seven fouls won earned dead ball opportunities for his team.

Offensively, he had a team-high four shots and two shots on goal. His 75 touches were second only to Keegan Rosenberry's 76 touches. Barnetta nearly doubled Lee Nguyen, the opposing number 10, in this category.

Ken Tribbett has taken flack in recent weeks for some atrocious mistakes that have resulted in conceded goals.

The idea of sitting Tribbett was widely discussed on Union social media channels, and I was one of the folks who preferred to see Josh Yaro at right center back.

Under pressure then, Tribbett put in probably his best performance of the season.

He was dominant in the air, steady on the ball, and most importantly, he didn't make any of the unforced errors that have really hurt him in the past month. 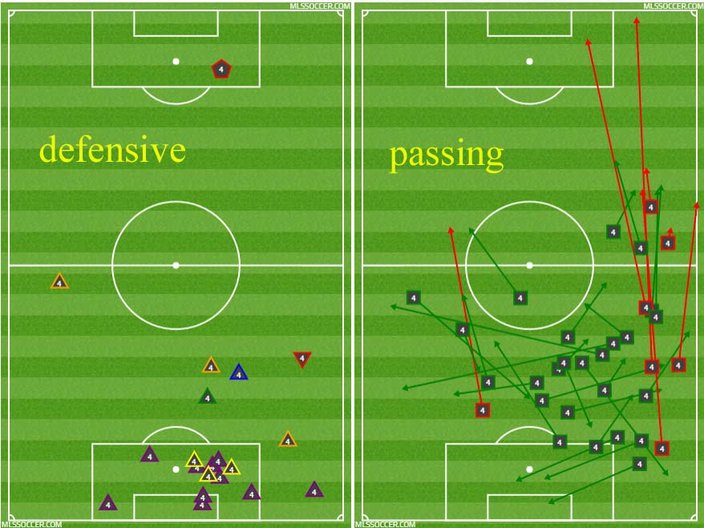 Defensively, he went one for two on tackles, adding three blocks inside the box, one interception, three recoveries, and ten clearances. He only conceded one foul, which actually happened in the opponent's penalty area, I believe on a set piece sequence.

In distribution, he went a reasonable 26 for 33 on the night. There were a couple of hopeful long balls booted up the field, but most of his passing was smart and simple.

It was an excellent near-post run and flick for the opening goal.

C.J. was physically assertive and played a solid game until he had to come out with the head injury.

For the second straight week, he created a scoring chance with a nice bit of backdoor pressure on the opposing six. This was a sequence that led to a dummy run and a shot from Bedoya.

He gets props for the second goal when he works inside the box to keep the play alive. He won't get an assist on Pontius' goal, but maybe he deserves one.

Superb on both sides of the ball, he just looks more comfortable in that advanced role.

You completely forget that he's on the field, then he pops up with a goal and assist in the second half. I might actually give Rosenberry a secondary assist on that play since it looks like the fullback actually nods down the corner kick before it comes off Pontius' noggin.

Pontius continues to produce goals and assists despite getting fewer touches on the ball than players like Barnetta and Ilsinho.

Quiet in a good way, he kept things simple by holding a good defensive shape and making high-percentage passes.

Bedoya got stuck in on a few tackles and showed a bit of bite to complement a conservative and effective performance.

His passing still leaves something to be desired, and he committed a bad turnover in each half that the Revs couldn't capitalize on.

A lesson for all young soccer players – don't stop until you hear the whistle.

The Union left back set the tone early with an excellent assist and followed it up with some hard-nosed defensive work.

When you score a goal and keep a clean sheet on the road, you get an A.

Clean and intelligent game from Tribbett, who looked comfortable out there. He was clinical in the air and distributed the ball well while also clamping down on Kei Kamara.

He was able to get into advanced positions early on, which allowed for interchange between himself, Ilsinho, and Barnetta.

His matchup with Chris Tierney was a bit different than what Fabinho had with Andrew Farrell on the other side of the field. Tierney isn't an endline burner, but he'll hit crosses from any spot on the field. Maybe Rosenberry, with help from Ilsinho, could have stepped out to cut down on that service a bit.

Big save in the first half to keep it to a 1-0 scoreline. Who knows where the game would have gone had New England equalized there.

The only awkward moment for Blake was the Kamara header that came off the post. It looked as though Blake thought the ball was going out of play, but it came off the woodwork instead.

Worked hard and made good runs to receive the ball, but his final decision never seemed to be the right one.

He took his goal well and didn't really celebrate. Maybe because he's pissed about sitting on the bench, or maybe it's because the game was already in the bag at that point.

Alberg has immense attacking talent, but with Bedoya and Barnetta in the fold, there's just no room for him in the starting lineup right now.

Nice reception for Davies from the New England fans. He got his first Union assist with a nice hold-up touch and layoff for Alberg.

He let a couple of card-worthy challenges go but kept a relatively decent hold on the game.