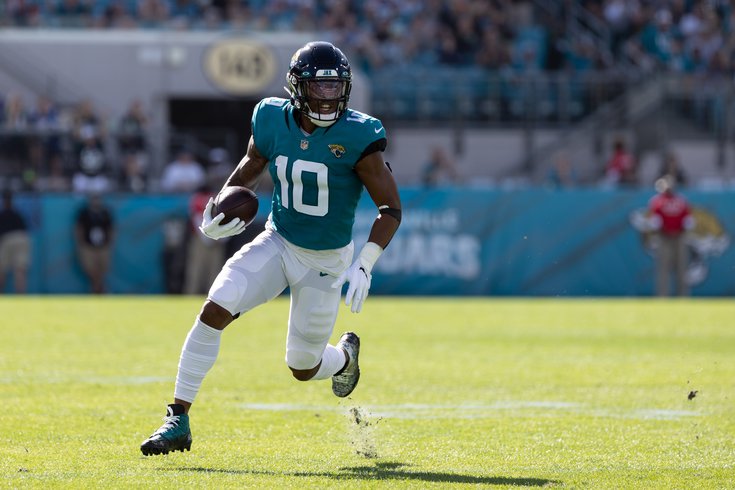 On Day 1 of NFL free agency, the Philadelphia Eagles knocked out a big need when they added Haason Reddick to their pass rush rotation. On Days 2, 3, 4, and 5, it's been a snooze fest, as a number of players have signed with other teams around the league.

The wide receiver and safety markets have been expensive so far, which might explain the Eagles' inactivity, though my understanding is that they had varying levels of interest in Christian Kirk, DJ Chark, and Allen Robinson.

Two days ago, we noted the top four Eagles fits at wide receiver, linebacker, and safety. So let's go ahead and update that here. Apologies to my regular readers for the copy/paste on some of these guys below.

• Zach Pascal, Colts: Pascal is one of Nick Sirianni's favorite players ever. In the past, we've seen Howie Roseman throw his coaches a bone by letting them sign their faves, like they did with Chase Daniel for Doug Pederson or about a half dozen players for Jim Schwartz. Pascal won't require a heavy target share and should be willing to do some of the dirty work in the Eagles' offense. Pascal is probably a fallback option if the first- and second-tier guys are too expensive. We might already be there.

• Jarvis Landry, Browns: Another highly productive slot receiver over his career, Landry was a cap casualty of the Browns at the outset of free agency. The bet here is that Landry is unlikely to choose a team like the Eagles in free agency, and will instead look to link up with a better passing quarterback. Still, if a market doesn't develop for Landry, he'd make the Eagles better and is worth watching.

• Keelan Cole, Jets: Cole is a former undrafted free agent of the Jaguars who played under then Jags GM Dave Caldwell, who is now a member of the Eagles' front office staff. Cole signed with the Jets in free agency last offseason on a one-year deal worth $5.5 million. He has averaged 37 catches for 538 yards and 3 TDs per season over his five-year career, and brings some special teams versatility to the table, including some kick/punt return ability. He would be something of a depth / third-tier option like Pascal above.

• Laviska Shenault, Jaguars: Shenault isn't a free agent, but after the Jags' acquisitions of Kirk and Zay Jones, it is believed that Shenault could be had in a trade. Shenault is a beefy slot receiver with some run-after-catch ability, and, well, if the Eagles trade for him, he has no choice but to play for the Eagles, while free agent receivers might view Philly as an undesirable location since they were the most run-heavy team in the NFL in 2021.

• Kyzir White, Chargers: White was a big-hitting safety/linebacker hybrid at West Virginia, who is now an undersized linebacker at 6'2, 218. In 2021, White had his best season, racking up 144 tackles, 2 INTs, and 1 sack. He perhaps has the range that some of the Eagles linebackers lacked in Jonathan Gannon's scheme in 2021.

• Joe Schobert, Steelers: The Steelers released Schobert on Thursday. He has had at least 100 tackles in each of the last five seasons, and he has some ball skills in coverage, with 8 INTs and 19 PBUs the last three years.

• Jayon Brown, Titans: Brown had a down season after re-signing with the Titans in free agency last offseason. However, in his first four years in the league, Brown had 9.5 sacks, 18 QB hits, 26 pass breakups, and 3 INTs. He was a productive player both in coverage and as a blitzer.

• Nick Kwiatkoski, Raiders: Kwiatkoski was a hot name during 2020 free agency, when he signed with the Raiders. Two years later, he's back on the market after the Raiders released him. Back in 2016, per Brandon Lee Gowton's "Eagles' interest tracker," the Eagles had Kwiatkoski in for one of their 30 allotted pre-draft visits, they held a private workout with him, and they were in attendance at his pro day. That's a good amount of attention for a guy who was projected at the time as a Day 3 pick.

• Terrell Edmunds, Steelers: Edmunds is a size-athleticism freak who has been a decent starter for the Steelers after they selected him in the first round of the 2018 NFL Draft. It would have been too expensive for Pittsburgh to exercise their fifth year option both on Edmunds and his safety counterpart in Minkah Fitzpatrick, so Edmunds will be a rare first-round player who has played decent enough to hit the free agent market after just four years. He is still available.

• DeShon Elliott, Ravens: Elliott has had some bad injury luck over his career, as he has suffered three season-ending injuries in four years as a pro. When healthy, Elliott is a physical, smart player with good size. In his one full season in 2020, Elliott had 80 tackles, 2 FFs, and 2.5 sacks. He could be a bargain signing on a one-year prove it deal.

• Rodney McLeod, Eagles: And finally, the expectation is that the Eagles will bring McLeod back, but they also need another starter alongside him.