Updating the Eagles' injuries after their Week 16 win over Dallas, plus a DeSean Jackson report

Doug Pederson provided the latest on Zach Ertz, Lane Johnson, Ronald Darby and the rest of the injured Birds 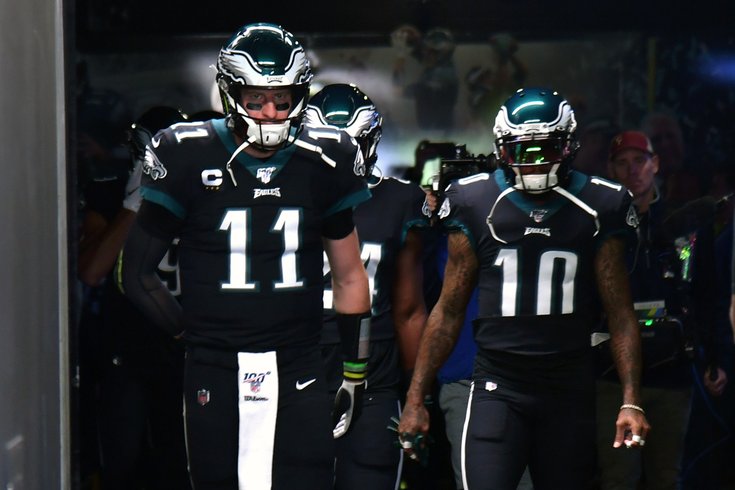 Heading into their Week 17 game against the Dallas Cowboys, the Philadelphia Eagles were without RT Lane Johnson, WR Nelson Agholor, and RB Jordan Howard, all of whom were inactive. They came out of that matchup with some additional injuries.

Speaking with reporters during his Monday afternoon press conference, Doug Pederson updated the statuses of the Eagles' injured players:

• TE Zach Ertz: “There is a rib that has been affected.” One rib, apparently.

Pederson added that he will speak with doctors and have an update for Thursday.

Update: Apparently, that one rib is broken, per Ian Rapoport of NFL Network.

• WR J.J. Arcega-Whiteside (foot): "J.J., actually I’m waiting on. He’s going to have a test result tomorrow, but should be fine. Nothing too serious there."

When asked if Rasul Douglas or Sidney Jones would start in place of Darby, Pederson responded, "Right now it would be Rasul."

• CB Jalen Mills (ankle): "Mills is, you know, his ankle. Tough guy, tough kid, ended up finishing the game, obviously. But he’s going to be day-to-day. Right now, he’s hurting today, but we’ll see as the week goes on, and progress him."

Pederson did not get asked about Howard or Agholor, though it feels doubtful that either of them will play Week 17.

And then in other injury news, according to Tim McManus of ESPN, DeSean Jackson might be ready to return for the divisional round of the playoffs, should the Eagles advance that far.

DeSean Jackson is expecting to re-join the team on the field should the Eagles advance to the divisional round of the playoffs, a source said. He is feeling good and clocking 19 mph in rehab. Not eligible to return from IR until Round 2 of postseason.

As McManus notes, Jackson isn't even eligible to return until that game, as he must stay on IR for at least 8 games (not 8 weeks, to be clear).

Even if Jackson isn't ready to go for the divisional round, the Eagles should activate him for it anyway, and make their opponent prepare for him, as the Bears had to do Week 9, when Jackson only played 4 snaps before re-aggravating his abdominal injury.