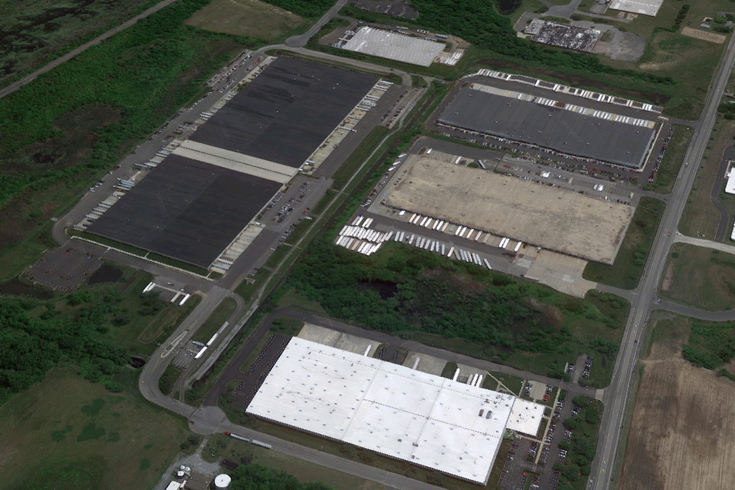 Police responded to a report of a gunman inside the UPS facility on Birchcreek Road in Logan Township on Monday, Jan. 14, 2018. This image shows and aerial view of the UPS facility – located inside the lower portion of building with the dark roof on the left.

UPDATE 1/14 12:20 a.m.:  The suspect has been apprehended after a SWAT standoff at the UPS facility.

The suspect was reportedly shot and the two women who were held hostage are safe, CBS3 reported.

There is no information on the condition of the suspect.

UPDATE 1/14 11:15 a.m.:  The suspect allegedly is holding his ex-girlfriend and another woman hostage inside the facility after shots were fired Monday morning, according to reports.

A witness told 6ABC the alleged shooter is someone who does not work at UPS but that and additional information has not been confirmed by police.

Gloucester County officials said 32 employees were inside the facility at the time of the incident, but the building has since been evacuated.

The Logan Township School District has put all schools on modified lockdown. All students and staff are safe.

Police in Gloucester County, New Jersey are responding to a report of an active shooter at a UPS facility there.

According to multiple reports, authorities were called to the scene around 9 a.m. Monday on Birchcreek Road in Logan Township.

Here's video, live and recorded, shot by some news media at the scene.

UPS released this statement on the incident but has not provided further information.

"UPS is working with law enforcement as they respond to an active shooter situation at one of the company’s supply chain processing facilities in Logan Township, New Jersey. We cannot provide information about the identity of people involved at this time."

There is no immediate word on injuries.

This is a developing story. Updates will be posted as they become available.