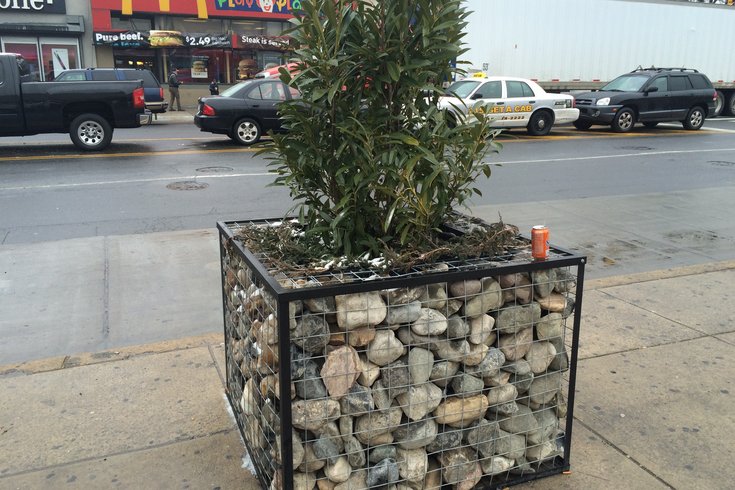 One of Alexander's planters, as seen on the morning of Jan. 22 at the corner of Broad Street and Snyder Avenue.

If the term "broken windows theory" means anything to you, you'll love what South Philly Urban Jungle owner Curtis Alexander has been up to.

After the Passyunk Avenue Revitalization Corporation received a $500,000 grant from the William Penn Foundation last year, talks began at the East Passyunk Business Improvement District about how to dress up the gateway to both East and West Passyunk Avenue -- particularly, where the avenue intersects with Broad Street and runs to Snyder Avenue.

Out of the blue, Urban Jungle owner Curtis Alexander suggested his spin on planters (planters!) might help do the trick.

"The planters were totally his idea," Renee Gillinger, executive director of the East Passyunk Business Improvement District, told PhillyVoice.com. "We have large planters down there already, but they're fiberglass, and the wear and tear on them are hard. People knock them over, and they crack."

The result, then, is a bit of an eyesore for the community, and another attraction for graffiti. What Alexander has devised, however, is made with a graffiti-proof fencing material called gabion, which, Alexander explained to PhillyVoice.com, is less susceptible to graffiti vandalism because the surface isn't flat. The surface is also capable of being pressure-washed in the event of a graffiti incident, unlike other containers.

The design idea, he said, was like "building a mosque within a larger structure."

"I developed that into a planter, so essentially, it's a square donut that's got a cavity that I fill with rocks," he said. "And the beauty of that, is it's heavy. It's cost-effective, too -- it'll never crack."

He said the walls of the structure are about five inches thick, and the whole container weighs about 2,000 pounds with the stone added to it.

"Nobody can tip it over, and that's another thing that happens -- vandals will tip things over," he said. "It's basically a bulletproof salutation for urban street containers. And the beauty of it, too, is that you can change the design by using different kinds of rock."

Or, you know, not rocks at all. He tossed out the idea of using the planter as a sort of street art project, filling the container not (just) with stones, but -- as one example he provided -- empty wine bottles lined up to create a pattern.

"It's a way to repurpose the planter and create a unique look," he said. "Or even using a different color rock -- orange, dark black, etc -- and changing the strains of rock. Or you can put a big centerpiece in the center, made of metal or cylinder, and plant the rock around the cylinder."

The possibilities are endless -- it's a way to implement street art that ultimately serves a very practical purpose. Currently, the planter (pictured above) installed on the west side of Broad Street in September, at the corner of Broad Street and Snyder Avenue, features skip laurels and blue rug junipers.

And though there's only one planter that's been created so far, more are on the way -- 10, in fact, with the possibility of nine others coming to West Passyunk Avenue (three, to be exact) and 15th Street, just south of the Passyunk gateway in the Newbold neighborhood.

"I'd also like to get these in other city municipalities, and I might start marketing them in shows," he said. "It's not just a planter, either. It could be a bench, or be a smaller planter, or a tree pit. ... The idea is to use creative ideas to fill them, so that they're not all the same."

Gillinger said that, so far, the planter has succeeded in not being vandalized (minus that orange soda can you see in the above photo, of course); it's also, she said, stopped delivery trucks from parking on the sidewalk, which had previously been a problem. And if nothing else, it fits with her organization's vision for design that's "smart for an urban space" and "green in our urban environment."

"I'd love to think that once this block has been spruced up, people will feel so great about it that [graffiti and vandalism] won't be an issue anymore," she said. "But it's important to be realistic -- graffiti is something we deal with a lot, and that might not happen."

Or, in other words, let's not kid ourselves into thinking a planter will single-handedly transform a street corner. But, it is a start.

Other planters, she said, will be placed in front of the Verizon store on the block, in front of the TruMark building and, she hopes, in front of the Philly Pretzel Factory shop. The implementation will happen in the next few months, provided the test run continues to go smoothly.

Alexander will also be opening a second Urban Jungle vertical landscaping location on April 2 at 1721 S. Water Street in the Pennsport neighborhood, he said. His manufacturing -- of the planters and other gardening products -- has already been moved to that storefront.