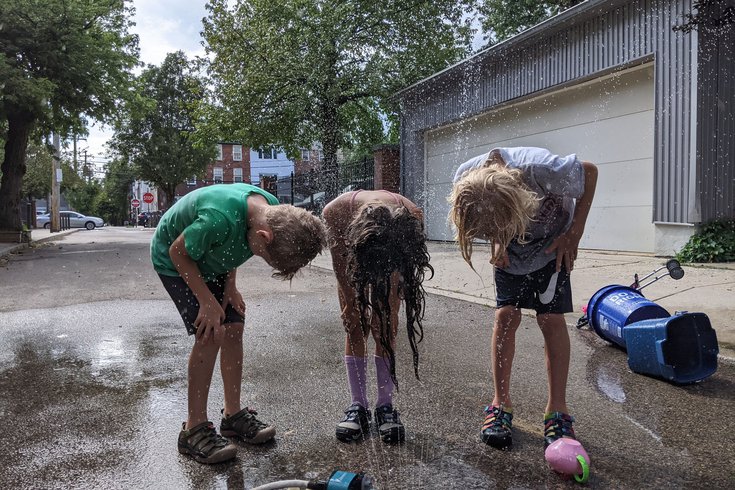 Philadelphia was among 16 cities chosen for a one-day study on urban heat and air pollution from the National Oceanic and Atmospheric Administration. On one designated day this summer, at least 50 Philly residents will be tasked as 'community scientists' to measure pollution in their neighborhoods.

Dozens of Philadelphia residents are expected to take part in a one-day study this summer to help the Academy of Natural Sciences measure extreme urban heat and air pollution in the city.

Participants will be trained as "community scientists" and given air and heat quality sensors to put on their cars that will gather information city officials can use to inform policy. Philly was selected for the study along with 13 other communities in the United States, as well as cities in Africa and Brazil.

The program is an initiative started by the National Oceanic and Atmospheric Administration to study the heat island effect, which is when dense urban areas with low-shaded asphalt and buildings gain heat throughout the day and radiate it back into the atmosphere.

Some highly developed areas can hit temperatures between 15 and 20 degrees higher than surrounding, more vegetated areas. Though summer days can be hot in most places throughout the country, extreme urban heat can lead to adverse health effects for residents, including a higher risk for respiratory illness and heat exhaustion or death.

In Philadelphia and other urban environments, extreme heat disproportionately impacts Black and Brown communities, many of whom experience other disparities in accessing preventative health care. The city's Climate Action Playbook, which plans its efforts to combat climate change, lists hotter temperatures and excessive precipitation as two major impacts of climate change.

The Office of Sustainability released the Heat Vulnerability Index in 2015, which found some neighborhoods can be up to 22 degrees hotter than others. The hotter neighborhoods tended to be low-income, Black and Brown communities throughout the city.

As life expectancy in the city varies by neighborhood, those with the lowest expected health outcomes are typically the ones with extreme heat conditions.

"Our nation faces a climate crisis that has exacerbated inequities for low-income communities and communities of color," said Richard Spinrad, NOAA administrator. "NOAA is helping communities measure their hottest places so that they can use this information to inform strategies to reduce the unhealthy and deadly effects of extreme heat and help us build a climate friendly nation."

On one of the hottest days of the year — most likely in July – participants chosen by Drexel University's Academy of Natural Sciences will receive a heat and air quality sensor to attach to the top of their cars. The sensor will track temperature, humidity, air pollution, time and location.

City officials will receive the data, along with citywide temperature predictions and an analysis from CAPA Strategies – a data analytics team focused on climate action and policy. The datasets will then be used by both the city and the NOAA to create plans to fight the impacts of urban heat.

"This is a community driven campaign, literally," said Richard Johnson, director of community science at the Academy. "Be a scientist with us, map your community and use that information to bring about change. Doing it with dozens of residents on the same day; it's an event. It raises awareness about the challenges of climate change, urban heat and air pollution and gives communities information they can use to explore and advocate for different solutions."

The Academy of Natural Sciences is recruiting residents to participate through June and plans to advertise around the city.

The field of community science is still relatively new, Johnson told WHYY. He said that the field finds people at the community level to guide research, rather than relying on satellite imagery and data that typically informs climate policy.

By getting residents involved in research that has to do with their own communities, the Academy of Natural Sciences can work with the city to determine which areas need new or improved green spaces.

The Academy is also partnering with the Pennsylvania Horticultural Society and its Tree Tenders in support of the Philly Tree Plan. The city's 10-year initiative to improve its tree canopy and establish an "urban forest" is important in reducing the adverse health impacts of extreme heat.

Providing more shaded areas in certain communities can help reduce temperatures during the hotter months and improve neighborhood satisfaction at the same time. This is especially important in historically divested neighborhoods, which have less shade and less tree canopy than wealthier communities in the city.