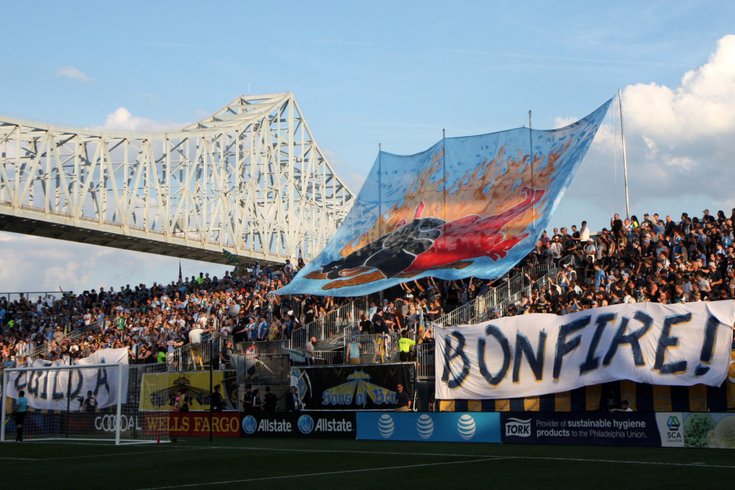 The Sons of Ben tifo game was on point during last week's sold out game against New York.

Did we recently witness one of the best all-time atmospheres at Talen Energy Stadium?

Last Sunday's nationally televised game against New York had a 2011 vibe to it, which means that the stadium was full, the fans were rowdy, and the game actually meant something in the eastern conference standings.

It wasn't hard to recognize the malaise that had settled over Talen in recent years. The novelty of having a new team wore off in 2012, and the Union plodded through several years of underwhelming performances both on the field and in the front office. More often than not, the River End was only three quarters full. The stadium maybe reached 65 percent capacity on a good day.

Some folks bounced around the topic on social media – what game featured the best atmosphere in Chester?

Not counting last Sunday, here's what I came up with.

This was the very first game at PPL Park.

The stadium was not completed until late June in 2010, so the Union had actually played eight of the first 10 games on the road. Those two home games took place at Lincoln Financial Field, with Sebastien Le Toux scoring a hat trick in a 3-2 win against D.C., and Danny Mwanga banging in a stoppage-time equalize for a 1-1 draw with Dallas.

Philly was 2-7-1 at this point in the season. Expectations were not high in year number one, but the buzz of having a brand new team in town carried everybody through a mostly mediocre inaugural campaign. People were excited for this game, not only because it was the debut of the stadium, but also because they only had two opportunities to see their new team over the course of three months.

Pat Noonan scored the first goal in stadium history to give Seattle a 1-0 halftime lead. Philly came back to equalize through Sebastien Le Toux, then Chris Seitz stoned Noonan on a penalty to keep the game level. The Union added two more goals for a 3-1 win.

To this day, it's still the only postseason game played in Chester.

The atmosphere was unique, almost like a mix of excitement, anxiety, and uneasiness. This was, after all, a new experience for a young fan base and a young team. Nobody really knew what to expect against a Houston side that featured plenty of veteran talent and savvy.

Peter Nowak inexplicably rolled out a five-man defense for this game, which was a wrinkle that we hadn't seen all season long. Philly conceded just five minutes into the game, only for Le Toux to equalize just two minutes later.

The new shape didn't fit the Union, who just weren't themselves in this game. Calen Carr added a second goal and Houston earned a 2-1 win in the first leg of the series.

I think this was the best atmosphere of 2011, even better than the playoff game.

This was a nationally televised matchup against New York that took place just four games into the season. That's really the key here. Philly was a different team in 2011, and after opening the season with two straight wins, fans were on board from the very beginning of the campaign.

Fan-favorite Roger Torres scored the game-winner with his very first touch of the ball. The PPL crowd went absolutely bonkers, maybe the loudest roar I've heard for any Union goal.

One of the things that stood out about this game was that it was early April and still rather cold outside. In recent seasons, the stadium hasn't started to fill up until it the weather begins to turn. You didn't get that in 2011. Fans came out regularly in March, April, and October. You really felt like people were dialed in from day one, and this game convinced a lot of people that the Union might actually be a contender in their second season.

Without a doubt, the U.S. Open Cup finals have to be at the top of the list.

I'd put 2015's final at #2, just because it was the second season in a row that this game was played at PPL Park.

This was a tight affair, and the crowd was definitely larger than the one that had showed up for the 2014 final against Seattle. Philly opened the scoring through Le Toux after a brilliant assist from Vincent Nogueira.

By far, the most intense part of the game was the penalty shootout to decide the champion. It took place in front of the River End and the crowd was absolutely dialed-in. The scene in the press box was frantic, with journos not knowing whether to tweet, or write, or just sit there and observe instead. Everybody was on pins and needles.

It was nothing short of heartbreak for Philly, but credit where it's due – Sporting was absolutely clinical in the shootout.

How can a game be #1 on this list when it wasn't even sold out?

This game, even with a crowd numbering around 12,000, just came with an aura of authenticity. The Union were terrible in the league that season and didn't even register on the radar of the average Philadelphia sports fan.

The people who showed up were diehards. They were the educated and loyal fans who had stuck with the team through three crappy seasons. The relatively sparse crowd matched the volume of a sold-out stadium, which spoke volumes about those in attendance.

There weren't any casual fans at this game. These were Union diehards, who understood the gravity of this match. This was an opportunity for the club to win its first trophy, and these fans wanted to be there to see it.

Both teams played an excellent game. It may actually be the best game I've ever seen at PPL Park. The Union certainly didn't look like the team we had seen struggle throughout the regular season.

In the end, it came down to depth, and Seattle got the job done in extra time when they were able to bring Obafemi Martins, Marco Pappa, and Gonzalo Pineda off the bench.