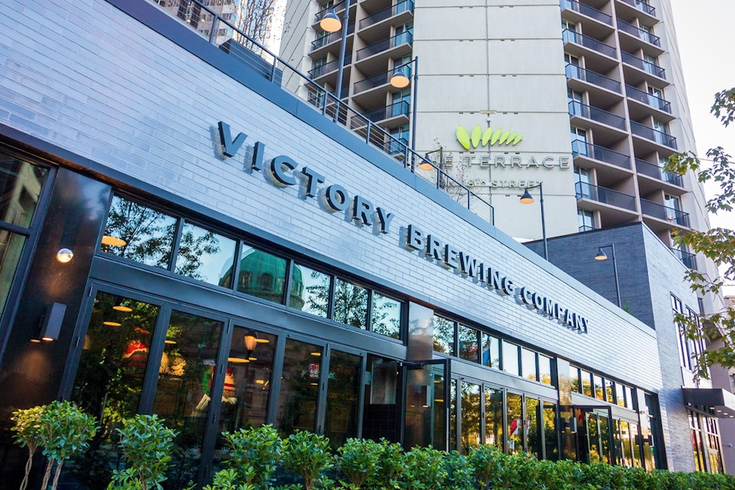 Victory Brewing's new taproom in Philadelphia has two inside bars and one outside bar, a street level beer garden and a rooftop patio with views along the Benjamin Franklin Parkway.

The Chester County-based brewery began serving drinks this week at its new taproom at 1776 Benjamin Franklin Parkway in Center City, marking the company's first location in Philly. Located at The Terrace on 18th, Victory Brewing's new taproom stands where the TGI Fridays was once situated.

Plans for the brewpub were initially unveiled in October 2019. The taproom was scheduled to open last year, but the COVID-19 pandemic and delayed construction led to its opening being pushed back to this fall.

The 14,000-square-foot facility features a production brewing system, full scratch kitchen, two inside bars and one outside bar with at least 30 different beers on tap. There will also be a street level beer garden and a rooftop patio with views along the Parkway.

The taproom offers the brewery's full lineup of craft beers, seltzers and cocktails, as well as a special collection of draft beer that will be only available at the Philly location.

Other brands, such as Southern Tier Brewing, Sixpoint Brewery, Bold Rock Hard Cider and Southern Tier Distilling Company, will be served as well. Packaged beer and cocktails will be made available to go too.

The scratch kitchen's food menu consists of brewery favorites like pretzels, cheesesteaks, loaded fries and wings. The brewpub also features murals that "capture the essence of Victory, intertwined with the spirit of Philadelphia."

Victory Brewing said that the new space will serve as an innovation hub for its beer. The taproom is open Monday-Thursday from 4-10 p.m, Friday and Saturday from 11 a.m.-11 p.m. and Sunday from 11 a.m.-9 p.m.

"We have always wanted to plant roots in Philly, and now, with another location at historic 1776 Benjamin Franklin Parkway, we can't wait to spend even more time with you!" the brewery wrote on Instagram.

A new Federal Donuts location is expected to open soon next to the taproom.

Founded in 1996, Victory Brewing also has brewpubs located at its headquarters in Downingtown, as well as in Parkesburg and Kennett Square.