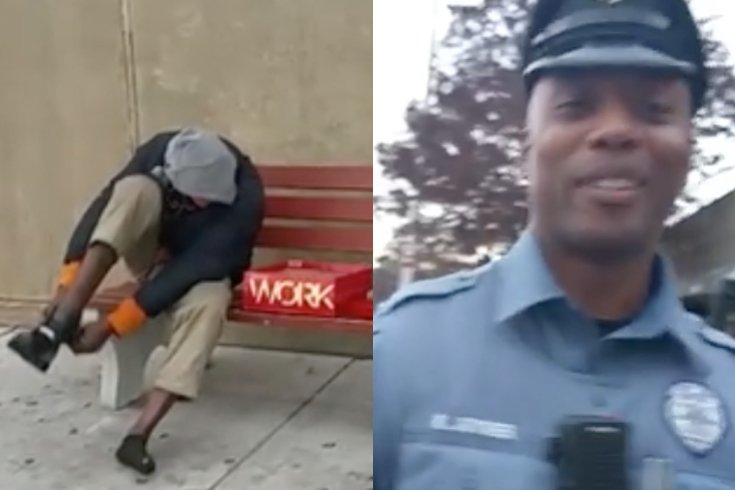 DRPA Officer Kenya Joyner's act of kindness went viral on Facebook after he bought a homeless man a new pair of shoes.

A video of a Delaware River Port Authority (DRPA) police officer giving a homeless man a new pair of shoes has gone viral with more than a million views.

According to the Philadelphia Inquirer, the officer, 43-year-old Kenya Joyner of Wilmington had seen the man Saturday lying on a bench and was later called to an NJ Transit bus that he was being kicked off of because he didn't have any footwear, which is not allowed.

After Joyner took the man off the bus at the PATCO Lindenwold Station he asked him why he wasn't wearing any shoes. More from the Inquirer:

After seeming reluctant to answer, the man said "I don't have any," in a low rumble.

"It was cold Saturday," Joyner said. "I asked him 'what size shoe do you wear?'"

He asked the man if he wanted sneakers or boots, and then went across the street to a Payless and bought the man size 12-13 boots costing, he said, between $40 and $50.

The encounter was recorded by Kayla Palmer of Pine Hill. She posted it on her personal page, getting more than 41,000 views, and also to the 6ABC Facebook page. The second post now has nearly 1.5 million views.

CBS Philly reports that the act of kindness caught the attention of DRPA CEO John Hanson, who said Joyner did "the right thing."