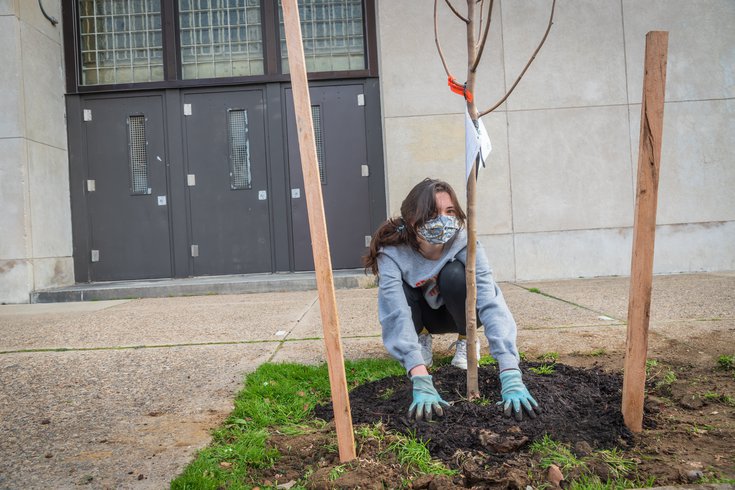 PHS Tree Tenders groups are hosting a widespread tree-planting effort between Nov. 17-21, aiming to plant at least 1,300 saplings throughout Philadelphia.

Philadelphia is about to look a lot greener, thanks to a widespread volunteer effort spearheaded by the Pennsylvania Horticultural Society.

The nonprofit and 80 of its Tree Tenders groups will host planting events throughout the city between Nov. 17-21, with the goal of planting up to 1,300 trees. Sponsored by PECO, the effort aims to improve the city's tree canopy, which has been impacted by changes in land use, urban development and other environmental factors.

Those who wish to take part can get involved by visiting the PHS website. No prior planting or gardening experience is necessary, and participants are encouraged to look for an event in their own communities. Volunteers should anticipate spending two or three hours planting throughout the week.

Proof of COVID-19 vaccination will be required to join, and everyone will be expected to wear a mask. The organization is also asking people to bring hand sanitizer, gloves, close-toed shoes, a water bottle and a shovel, if they have one. If volunteers do not have a shovel, one will be provided alongside saplings, pickaxes, brooms and trash bags.

The next generation of #PHSTreeTenders is here 🌱 This fall, PHS Tree Tenders of all ages are planting 2,000 trees in the Greater Philadelphia region. You can support their work by donating to the PHS 2021 More Trees Please campaign. Learn more at https://t.co/ETDOwHQXkP. pic.twitter.com/mFOpf5s2qw

According to the U.S. Department of Agriculture's Northern Research Station, a tree canopy consists of branches, leaves and stems that cover the sky when viewed from below.

In a 2019 assessment found that Philadelphia's tree canopy had declined between 2008 and 2018. Although there were some gains from individual plantings, they were outpaced by losses from large tracts of forested land. The city gained 1,980 acres of tree canopy during the decade, but lost 3,075.

A declining canopy can affect a city’s ecosystem and its residents' quality of life, especially as climate change brings increased temperatures and longer heat waves throughout the summer.

In 2009, the city set a goal to have tree canopy make up 30% of every neighborhood by 2025. A study examining the impact of this goal found improvements could prevent 271-400 deaths per year.

Only 20% of Philadelphia's land is covered by tree canopy, according to the 2019 assessment. But researchers found another 23% of the city's land potentially could be used to boost tree canopy, particularly in areas that have seen losses in recent years.

Improving the city's canopy coverage has potential benefits outside of environmental factors, including increased property values and energy savings, according to TreePhilly.

Along with TreePhilly, other programs have organized planting events in order to achieve the city's goal of 30% canopy coverage in every neighborhood. The Office of Sustainability Greenworks initiative has provided over 21,500 trees to the Philadelphia area since it was established in 2009.

Each spring, the program gives away 1,000 free yard trees to community members as part of their citywide planting initiative.