Even though Halloween is almost over, these spooky places are open all year long 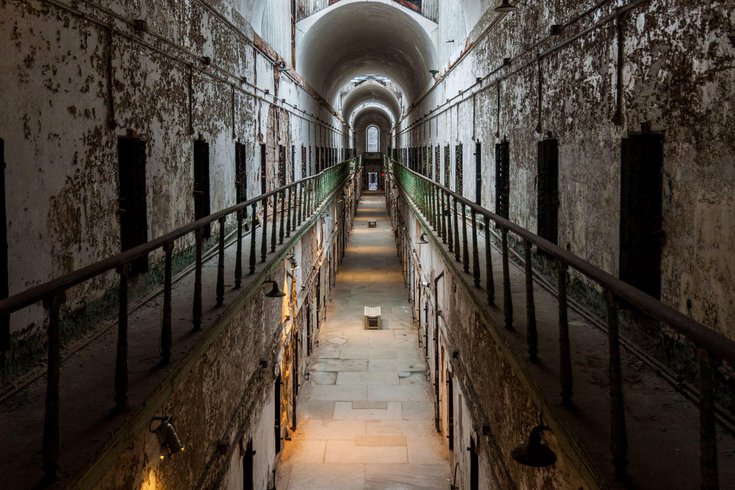 Eastern State Penitentiary is one of Philadelphia's most famous haunted attractions, offering Halloween-themed events as well as year-round tours of the abandoned prison.

Halloween in Philadelphia is no joke. Between ghost tours, haunted bars, and trick-or-treating events around the city, there is certainly something for everyone. For those who would rather celebrate “spooky season” all year long, there are plenty of year-round haunted activities throughout the region.

Arguably the most famous haunted attraction in Philadelphia, Eastern State Penitentiary is an abandoned prison in the city's Fairmount neighborhood. Its stone cell-blocks tower over the largely residential area, and is home to one of the most popular Halloween destinations in the city. Formerly known as Terror Behind the Walls, "Halloween Nights" is a 15-attraction haunted tour that is just wrapping up its first year at the Penitentiary.
For those who want to visit the prison throughout the year, Eastern State is open for daytime tours Wednesday-Sunday from 10 a.m. to 5 p.m. The Penitentiary's "Night Tours: Winter Holidays" guided tours will occur each Thursday, Friday, and Saturday evening from November 23-December 23, and every evening from December 26-December 30.

Laurel Hill Cemetery was founded in 1836 as a response to increased urbanization and rapid industrialization of the Philadelphia area. As the burial ground for several prominent leaders of historic Philadelphia, Laurel Hill is a common tourist destination for history lovers and paranormal hunters alike. Although Laurel Hill is open to the public daily, they often host themed events and coordinate private ghost hunts.

Built in 1911, Baleroy Mansion is located in one of Philadelphia's most affluent communities. The Chestnut Hill mansion was purchased by the Easby Family in 1926, where George Meade Easby and his younger brother Steven were playing outside of the house when they looked down into the courtyard fountain. Though George saw his reflection staring back at him, Steven saw just a skull. Shortly after, Steven died of a childhood illness. Meade Easby lived in the mansion until his death in 2005. Following his death, the majority of antique items in the home were sold at auction.
Baleroy Mansion is now a private residence after it was purchased in 2012.

This historic Bucks County mansion was built in 1687 and first owned by Phineas Pemberton, William Penn's chief administrator. Though it is primarily used as a historical site for educational and civic purposes, Bolton Mansion has also seen a number of ghost sightings in its 330 year history, including a little girl often seen peeking out of its second floor windows. They hold public and private tours for groups of paranormal enthusiasts.

The first reported ghost sighting in the Burlington County Prison was in 1833, following the execution of an inmate. Since then, visitors to what is now the Prison Museum have reported spirits and ghosts roaming the halls. Self-guided tours are available during the Museum's regular hours, open Thursday-Saturday 10 a.m. to 4 p.m. and Sundays from 12 p.m. to 4 p.m. Paranormal investigations are permitted on Friday and Saturday evenings from 7 p.m. until 12 a.m., with group pricing beginning at $350.

There are several ghost tour companies throughout the Philadelphia region, but Ghost City Tours Philadelphia provides daily ghost tours by appointment all year long, with The Ghosts of Philadelphia Tour at 8 p.m. and The Founding Phantoms Ghost Tour at 9 p.m.
The ghost tours take visitors through haunted locations like historic Elfreth's Alley, Eastern Penitentiary, and Fort Mifflin, among others.

Some other famous haunted attractions include Philadelphia’s Edgar Allan Poe house, where the famed poet and writer lived for a brief time in the city's Spring Garden section. Though tours are temporarily unavailable due to the COVID-19 pandemic, visitors can still view the outside of the house, located at 532 N 7th Street.