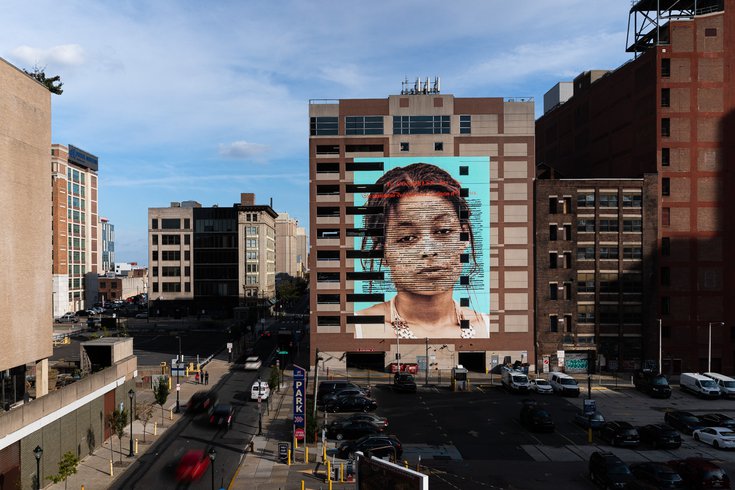 'Declaration' was unveiled Thursday as part of the Mural Arts program's Reimagining Re-Entry Fellowship, which enables artists affected by the criminal justice system to address issues like mass incarceration through artistic expression.

The Mural Arts program has changed Philadelphia's landscape through arts education, restorative justice and community engagement since its 1984 inception as a means for addressing graffiti.

Its latest mural, unveiled Thursday at 150 N. Broad St., confronts the contradictions of the nation's founding. "Declaration" features an image of a young Black woman with the words of the Declaration of Independence printed in the background.

"Declaration was designed by Dwayne Betts and Titus Kaphar, artists in the Mural Arts program's Reimagining Re-entry Fellowship. The mural is featured on the backside of Parkway Building 150 in Center City, where visitors can see it as they approach Broad Street from Race Street.

"This powerful piece contends with how our nation's founding documents guaranteed essential freedoms for some while also legitimizing the systemic oppression of others," Councilmember Kendra Brooks tweeted Thursday night.

My office was proud to join @muralarts for the unveiling of “Declaration.”

This powerful piece contends with how our nation’s founding documents guaranteed essential freedoms for some while also legitimizing the systemic oppression of others.

Stop by 150 N Broad to check it out pic.twitter.com/zAB2dcptJW

The Reimagining Re-Entry Fellowship funds artists affected by the criminal justice system, aiming to address issues like mass incarceration through creative expression. It received a $200,000 grant from the Art for Justice Fund when it was established in 2017, allowing its inaugural group of artists to begin work.

"Dedication" is one of several pieces from the second group of artists, who began 20-month fellowships in 2019.

"The Declaration of Independence is both a revolutionary document and evidence of many contradictions in the history of the United States," Mural Arts description of the mural reads. "The redaction of this document reveals the truths and contradictions as seen by current American citizens, many of whom are people of color."

The depiction of a Black girl featured alongside the text of the Declaration of Independence aims to show the contradiction in its famous phrase "All men are created equal." The Constitution, written a decade later, included the Three-Fifths Compromise, which counted slaves as 3/5 a person.

Betts is a lawyer who has authored a memoir and three poetry books. In 2012, President Barack Obama appointed him to the Coordinating Council of the Office of Juvenile Justice and Delinquency Prevention.

Kaphar is an artist whose work has delved into the history of representation, seeking to examine the power of a rewritten history. In 2014, Time Magazine featured a painting Kaphar made in response to the protests that erupted following the police shooting of Michael Brown in Ferguson, Missouri.

Other recently-completed projects from the fellowship include "PhilaGuernica," which reimagines Picasso's "Guernica" by putting a utopian spin on what is arguably the most famous anti-war painting in history. The mural, designed by Jared Owens, is located at 1131 Callowhill St.