The carrier serves more flights to PHL than any other. On Sunday it called off 34 flights here and delayed 19 more, blaming bad weather for the issues throughout its system 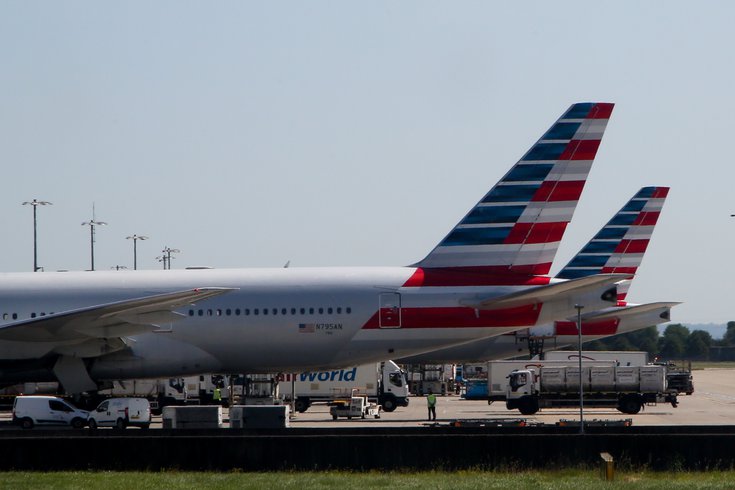 Almost 2,300 American Airlines flights have had to be called off over the last four days due to bad weather putting flight crews out of position, the carrier said.

Widespread cancellations of American Airlines flights that commenced over the weekend continue to impact travelers who are scheduled to land in or takeoff from Philadelphia International Airport on Monday.

At least 25 of the carrier's flights had been canceled or delayed by late morning, according to FlightAware. That accounts for 14% of its trips scheduled at the airport.

The Fort Worth, Texas-based airline said that 338 flights nationwide had already been canceled, with another 166 trips having already been delayed. Among U.S. carriers, Southwest Airlines had the second-most cancellations with 79 – or 1% of its total flights.

This marks the fourth straight day of widespread disruptions for American Airlines flights across the country. Nearly 2,300 have been called off, amounting to more than 10% of its scheduled trips during that time, the company said.

The extensive cancellations were felt in Philly on Sunday, where 34 trips were dropped, with an additional 19 being delayed. Philadelphia International is one of American Airlines hubs, and the airline schedules more flights to and from PHL than any other carrier.

In a memo sent to staff by Chief Operating Officer David Seymour, blame was placed on high winds and bad weather that had impacted several of American's major hubs – leaving crews out of position. The business decided to proactively cancel thousands of flights to help people be aware of schedule changes in advance.

A total of 1,800 flight attendants returned to work on Monday to help get flights back on schedule, and more are expected back from leave at the start of December. The company anticipates hiring 600 new attendants by the end of the year.

American canceled hundreds of flights this summer due to labor shortages caused by the COVID-19 pandemic, increased travel demand and inclement weather. About 1% of its systemwide operations were cut to account for the impact.

The airline's most recent cancellations come just weeks after Southwest was forced to call off thousands of trips nationwide due to what that company said were air traffic control issues and bad weather. However, reports emerged that the issue may have been the result of employees not reporting to work in protest of the company's COVID-19 vaccine mandate.

A spokesman for American Airlines said that while operations are improving, impacts are expected to be felt through early this week.