In an op-ed for the Philadelphia Inquirer, the councilmember urged women to get routine mammograms 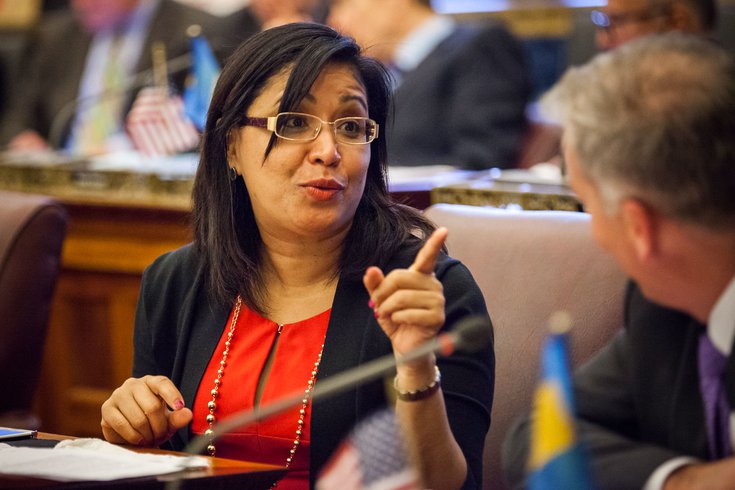 Councilwoman Maria Quiñones-Sánchez revealed a months-long battle with breast cancer in an op-ed for the Philadelphia Inquirer. The councilmember discussed how seeing the unveiling of a historical marker for LGBTQ+ icon Gloria Casarez in early October influenced her decision to publicly disclose her diagnosis and current treatment.

She noted in the Inquirer editorial that she had gotten her first mammogram in seven years this past summer, knowing that there was a small lump in her breast, but putting off a yearly screening because COVID-19, work, and life got in the way. The mammogram and subsequent testing lead to a diagnosis of breast cancer over the summer.

Though Councilwoman Quiñones-Sánchez is currently cancer free and receiving chemotherapy at the Hospital of the University of Pennsylvania's Perelman Center, she writes that her journey has not been easy, as she begins to receive preventative radiation therapy in the coming weeks.

"Even though I trusted my doctor, I went to Penn for a second opinion, hoping that they could tell me something different. I was determined to maintain my work schedule," she wrote. "Three days after I had my breast removed, I joined a Zoom meeting with my staff, never missing a beat in my duties as a City Councilmember."

The Councilwoman goes on to urge women, particularly Black and Latina women, to prioritize getting their yearly mammograms.

She notes heavy research on rates of Black female mortality rates from breast cancer, noting that they are 40% more likely to die of the disease than white women. She goes on to note that for Latinas across the United States, breast cancer is the "top cause of cancer-related death in that community. Puerto Rican and Mexican women are more likely than other Hispanic women to die from breast cancer."

When the op-ed was published Saturday, several prominent figures throughout Philadelphia came out in support of Councilwoman Quiñones-Sánchez on Twitter, including Councilmember Helen Gym and Mayor Kenney.

Sending support and strength to my colleague @MariaQSanchez whose story will be sending me to my doctor for my own mammogram. Your courage and willpower is unbeatable! https://t.co/1Y6adhoM4W

Thank you to my friend and colleague @MariaQSanchez for courageously sharing your story and encouraging others to take advantage of early screening and detection. Wishing you a smooth and speedy recovery journey. https://t.co/qRcsY9pzPD

Symptoms of breast cancer include, most notably, lumps in the breasts or underarms, breast pain, and breast swelling, among others, according to the Centers for Disease Control and Prevention. The CDC recommends for women who are concerned about breast lumps or other notable symptoms of breast cancer to see their doctor as soon as possible, even though the symptoms can be caused by other ailments as well.

Breast cancer screenings are used to determine whether a person has breast cancer without having symptoms or risk factors. The U.S. Preventive Services Task Force recommends that women aged 50-74 years old get a routine mammogram every two years, and that women in their 40s consult their doctor about the best time to receive their first screening. The CDC suggests that women younger than 50 talk to their healthcare provider about the best options for breast cancer screenings. Some women may even be eligible for free or low-cost mammograms through the CDC-funded Pennsylvania Breast & Cervical Cancer Early Detection Program.