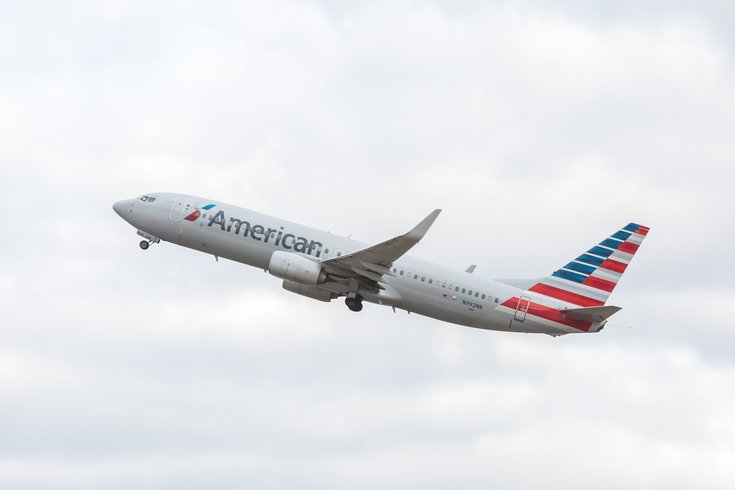 American Airlines expects to cancel flights across the United States over the next several weeks, including some at Philadelphia International Airport.

Hundreds of American Airlines flights have been canceled across the United States due to a combination of labor shortages, increased consumer demand and inclement weather. These factors, which already have resulted in flight cancelations from Philadelphia International Airport, are expected to continue through mid-July.

The airline said it plans to make adjustments that will slash about 1% of its systemwide daily operations through the middle of next month. That's roughly 72 flights out of 5,674 average daily departures, a spokesperson said.

Nationally, over the past three days, American Airlines cut 120, 176, and 97 flights, respectively. Disruptions over the weekend were more significant than those the airline has projected moving forward.

At Philadelphia International Airport, an American Airlines hub, about two flights per day may be canceled over the coming weeks. On Monday, the airline proactively canceled one flight scheduled to depart from Philadelphia. There were no proactive cancelations scheduled for Tuesday or Wednesday.

Whenever possible, American Airlines plans to notify travelers of canceled flights before the day of the departure. Most of the canceled flights will be aimed at markets where the airline has multiple options for reaccommodation.

"Our focus this summer — and always — is on delivering for our customers no matter the circumstance," the airline said. "We never want to disappoint and feel these schedule adjustments will help ensure we can take good care of our customers and team members and minimize surprises at the airport."

The squeeze at American Airlines comes amid surging demand for summer flights. The Transportation Security Administration screened about 2.1 million people at U.S. airports on Sunday, the highest number of passengers seen since the start of the coronavirus pandemic. This is still about 25% below the same period in 2019.

But the uptick in demand came much more quickly than many airline executives anticipated, according to the Wall Street Journal.

American Airlines said its adjustments have come in response to multiple pressures.

"The first few weeks of June have brought unprecedented weather to our largest hubs, heavily impacting our operation and causing delays, canceled flights and disruptions to crew member schedules and our customers’ plans. That, combined with the labor shortages some of our vendors are contending with and the incredibly quick ramp up of customer demand, has led us to build in additional resilience and certainty to our operation by adjusting a fraction of our scheduled flying through mid-July."

A spokesperson for Philadelphia International Airport did not comment specifically on the issues facing American Airlines, but said Tuesday there has been no indication cancelations are expected among other airlines. The airport has been averaging more than 50,000 passengers per day in recent weeks and expects to top one million in June.

Labor shortages in the airline industry come as Philadelphia City Council continues to push for a bill that would increase wages and benefits for contracted workers at Philadelphia International Airport. Local unions that say these changes are long overdue.

"During the pandemic, airlines like American Airlines have received billions of dollars in federal aid. We know that without action on the part of the city, the airlines and their subcontracted employers would not willingly protect essential frontline workers by offering them better wages, healthcare or paid sick leave," said Gabe Morgan, vice president and state director of 32BJ SEIU, the service employees union representing airport workers in Philadelphia.

Other airlines also have felt the impact of increased demand for travel in the United States. Nearly 10,000 flights were delayed on Sunday, including about 30% of Southwest Airlines' scheduled flights, according to The New York Times. About 25% of American Airlines flights were delayed, 23% for United Airlines and 21% for Delta Airlines.

Travelers are advised to regularly check their reservations with all airlines in advance of their departure dates — and on the day of — to be prepared for potential changes.