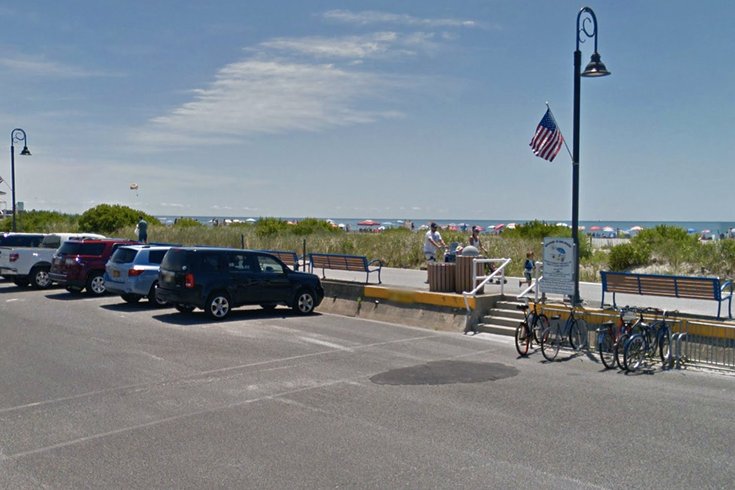 Getting to and from the beach this summer could be more dangerous under new legislation introduced by three New Jersey assemblymen, including two from Jersey Shore districts. Under current law, cars must stop and stay stopped before a crosswalk, like this one at Beach and First avenues in Cape May, if there is a pedestrian in the crosswalk. The new bill would put pedestrians at the mercy of drivers.

Just one week ago, I wrote about “idiotic legislation” that would enable drivers in North Dakota to hit protesters with their cars, claim they meant to hit the brakes instead of the accelerator and, in effect, get away with assault or vehicular homicide.

Yes, it remains idiotic. I thought it was an isolated aberration and violation of societal norms that hold it’s pretty much always abhorrent to intentionally run someone over with your car.

Wrong was I. Not about the societal norms, about the aberration.

Apparently, several legislators in New Jersey see some value in such legislation. They want to slash pedestrian-safety initiatives via the “Driver and Pedestrian Mutual Responsibility Act.”

Before we get into the specifics, I think a better title would be the “Let’s Pretend Cars Aren’t Sometimes Killing Machines and Ignore That The Worst Thing A Pedestrian Can Do To A Vehicle is Leave a Dent or Cracked Window Act.” Or, the “’I Have A Great Idea, Guys! Let’s Give Impaired Drivers an Easy Out if They Hit a Jaywalker’ Law.”

You can read the whole thing – which was introduced on January 10 by N.J. assemblymen Chris A. Brown, R. Bruce Land and Bob Andrzejczak, of Atlantic, Cape May and Cumberland counties, respectively – via this link.

You can also read the Bicycle Coalition of Greater Philadelphia’s take – which is where I first learned of this idiotic legislation – via this link, too.

I suggest you read both, as I have.

This is of particular import because two of the legislators come from the Jersey Shore, and their bill would essentially clear drivers who strike someone crossing the street, but not in the crosswalk.

Several years ago there was a law change in New Jersey that cars must stop and stay stopped before a crosswalk if there is a pedestrian in the crosswalk—removing ambiguity from pedestrian-driver interactions.

But this bill turns that clarity on its head. It would put pedestrians at the mercy of drivers who may not be following the law themselves. According to the bill’s sponsors, pedestrians are “prohibited, under the bill, from crossing a roadway until traffic yields to the pedestrian at a marked crosswalk or unmarked crosswalk at an intersection.”

Something interesting to note here is that this bill regularly replaces the word “stop” with “yield” in order to make things less clear on the street and take protections away from the pedestrian. “Yield” is ambiguous and does not provide clear language in regard to motorist duty, making streets less safe for pedestrians.

This bill, according to its sponsors, “removes provisions of existing law providing a permissive inference that a driver did not exercise due care for the safety of a pedestrian in the event of a collision between the vehicle and pedestrian within a marked crosswalk or at an unmarked crosswalk at an intersection."

Getting past the fact that JAYWALKING IS ALREADY ILLEGAL IN MUNICIPALITIES ACROSS THE GLOBE AND AT THE SHORE IN PARTICULAR, I wanted to hear more from the sponsors about their “intent to balance responsibility between drivers and pedestrians when pedestrians cross a roadway.”

Particularly, in light of how their legislation “removes portions of existing law … to require a driver to stop and remain stopped to allow pedestrians to cross a roadway in certain situations.”

And how “the bill removes provisions of existing law providing a permissive inference that a driver did not exercise due care for the safety of a pedestrian in the event of a collision between the vehicle and pedestrian within a marked crosswalk or at an unmarked crosswalk at an intersection.”

Because, to me, that seems like the NASCAR trio has set out to make streets at the Jersey Shore – and beyond – considerably less safe.

I emailed all three seeking comment, but none took me up on my offer to talk it through.

I also left a follow-up voicemail at Brown’s office. He didn’t call back but Tom Suthard – his chief of staff – graciously emailed. He explained his boss is too tied up to talk, but that Brown asked his Suthard to send me an opinion piece he’d written about the legislation.

That was very nice of them.

'A HEALTHY DOSE OF CAUTION'

In explaining his motivation, Brown cited an “old proverb,” his grandmother and the vintage video game “Frogger.”

The grandmother comes into play insofar as she taught him to “look both ways for cars, and then cross the street only when it’s clear.” Great advice. In fact, I’ve instilled it into my son’s mind as well.

And the video game gets namechecked via imagery of the game’s frog trying to survive by hopping zig-zag across a busy street, avoiding vehicles that could take its life. A fun, fun game, kids (though I dug QBert a little more, but I digress.)

Brown packages that thematic theme to chastise peers who pushed for a pedestrian-safety initiative back in 2011.

A few years ago, Trenton politicians changed the rules on how we all cross the street causing pedestrians to abandon their own common sense. ... (That) loss of common sense has encouraged a mindset that pedestrians feel they have an absolute right-of-way, creating a real life version of the arcade game Frogger, but obviously with greater consequences.

I believe it’s time to return common sense to crossing the street, so I am proposing to restore a healthy dose of caution for pedestrians by repealing the 2010 law. We should return to a time when motorists and pedestrians have to be equally respectful, responsible, and aware of each other.

He then cites a scenario near-and-dear to the hearts of shore drivers.

We’ve all seen it – you’re driving down Atlantic Avenue on a beautiful summer day, you have the green light, and as you are almost on top of the intersection, someone strolls out into the street in front of moving traffic with an armload of beach gear, ignoring you and the other on-coming vehicles, causing you to jam on your breaks (sic), praying the vehicle behind you doesn’t rear-end you.

As you catch your breath, you watch the pedestrian reach the other side completely oblivious to how close he came to being run over.

Brown piece is decently-enough written. It’s always nice to see our legislators explain their thinking as an age of “alternative facts” dawns in America.

But here’s my concern: Brown uses statistics proving that pedestrian fatalities have increased nearly 10 percent from 2011 to 2014 instead of conscientiously realizing, “Hey, more pedestrians are getting hurt or dying, so maybe we ought to consider some way to make the streets safer for them.”

Yes, jaywalking is annoying – and violators should be ticketed substantially more than they are – but cars killing pedestrians is a menace.

What this bill would do is strip protections in an effort to make people think twice about finding a crosswalk as they lug gear and kids down to the beach.

Yes, drivers, bicyclists, joggers and walkers all bear some responsibility for roadway behavior. This is common sense.

Here's the opposite of common sense: legislators giving drivers a built-in excuse for striking a pedestrian.

That protects neither the constituents nor tourists who drop enough money at the shore each summer to sustain those constituents' lives in the off-season.

If you plan on heading down the shore this summer, and aren't all about that hit-people-with-my-car life, you might want to dial up that trio and tell them, "Yo, I'd really prefer not to get smacked by a car when I'm walking to or from the beach."

Better yet, let your shore-town Realtors know that this is the sort of legislation that makes beaches in Delaware and Maryland look even more appealing.