The groundbreaking is set for May 2020, but you can take a virtual tour of the new space with the video below 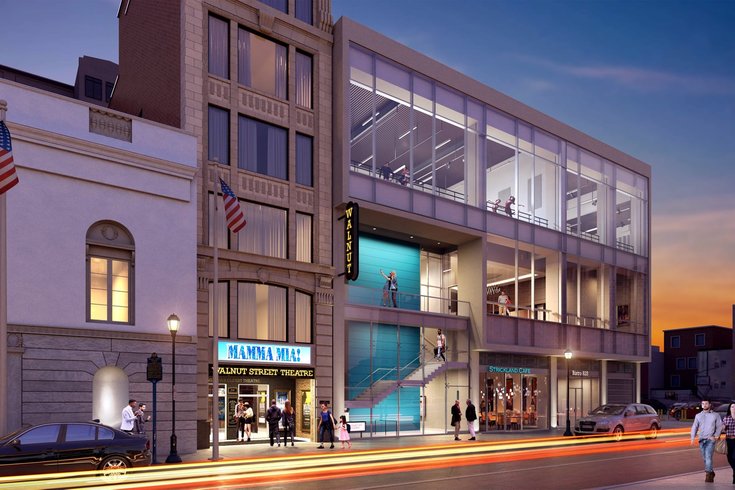 The Walnut Street Theatre announced plans for a $39 million expansion, which includes a new box office, rehearsal spaces, a theater-in-the-round, lounges, offices, and a restaurant.

The Walnut Street Theatre has announced plans for a $39 million expansion that would grow its performance space, lobby, rehearsal space, and include a restaurant.

The project will add 35,000 square feet of space to its Eighth and Walnut location — a fixture there since 1809. It will break ground in May 2020 and be completed in 2022, Walnut Street officials announced Saturday. Funding for this enormous undertaking will come through a capital campaign seeking support from private philanthropy and public donors.

The largest addition — which has been designed by architects JKRP Partners, the firm responsible for the Ambler Theatre and various Movie Tavern locations — will be a 400-seat theater-in-the-round on Walnut Street's second floor. The new performance space will have a central stage surrounded by six rows of seating on all sides, and it will have no walls or barriers in an attempt to create a more intimate setting for the audience and the actors. There will also be a removable stage floor for actors and props that can turn into a pool.

The announcement said this space's upcoming seasons will be able to "serve more of the community, with an emphasis on new works, Shakespeare, and additional children's and family programming."

The Inquirer reported the first two productions President and Producing Artistic Director Bernard Havard wants to do in the space are "1776" and "Romeo and Juliet."

On the second floor, there will be a bar, gift shop, historic displays, and an outdoor balcony terrace.

The third floor will house rehearsal rooms for both productions and educational programs, as well as a donor lounge. Nonpublic spaces will also include offices, dressing rooms, wardrobe, and an actors lounge.

Walnut Street Theatre has undergone updates before. In 1999 the main stage got a facelift, in 1970 it was renovated again to become more of a malleable performance space that resembles what it is today.