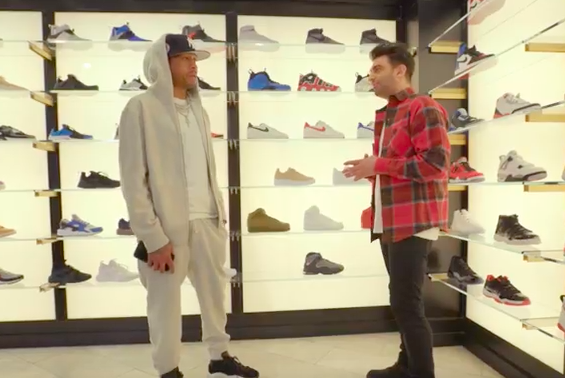 It's impossible to overstate the impact that Allen Iverson had on basketball culture, both on and off the court as a trendsetter in athletic fashion. Despite some resistance during his early years in the NBA, his role in keeping the game's appeal alive after the Jordan era is unrivaled by any player during or since his time league.

Nowhere is that more apparent than in the world of sneakers, where A.I.'s original "Question" and "Answer" shoes with Reebok remain a top brand alongside Jordan's Nikes. The company even reproduced a signature series to commemorate the 20th anniversary of his NBA debut with the Sixers.

The visit was filmed for a Complex video in which Iverson discusses what sneakers meant to him as a player and how fashion became such a vital part of life in the NBA.

"The better you look, the better you play," Iverson said, picking out four pairs to purchase during the visit. The full interview, which runs a good nine minutes, can be viewed below.