Filmed nine months ago, bicyclist posted video of fight on YouTube since charges not filed against driver 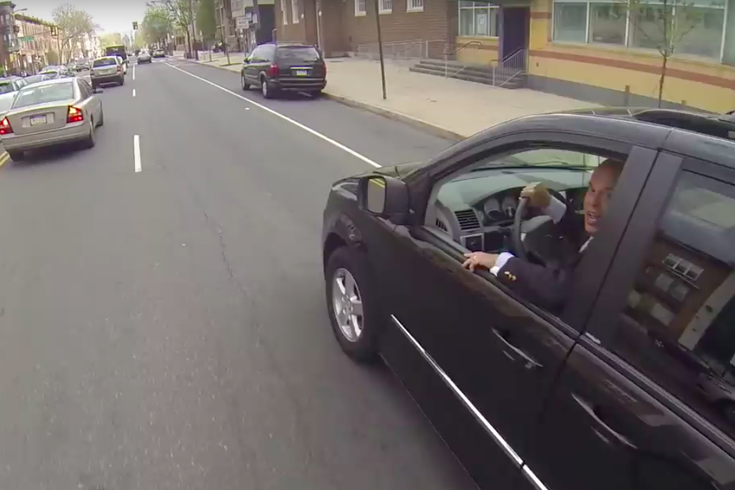 A South Philadelphia bicyclist recorded a confrontation he had with a driver on S. Broad St. several months ago. It's emblematic of ongoing tensions between bicyclists and drivers.

The never-ending saga of strained relations between Philadelphia bicyclists and drivers took a threatening turn this weekend when YouTube user “cheekflapperer” posted video of a confrontation he had after kicking an orange cone in front of a South Broad Street funeral home.

In the video – filmed about nine months ago but posted on Sunday, it had more than 80,000 hits by noon Monday – the bicyclist is riding northbound past the Monti-Rago Funeral Home when he kicks one of three orange cones blocking a loading zone.

Warning: The video contained in this post features profane language and on-screen captions.

By the time he reaches the Porter Street intersection seconds later, a black minivan cuts him off and seemingly tries to force him into a lane where another vehicle is passing.

“You like kicking cones over?” the driver yells toward the bicycle while riding alongside him.

“That’s not your parking spot,” the bicyclist responds. “I’ll do it every day.”

The profanity-laced confrontation comes to an end when the minivan speeds off after 30 seconds. The bicyclist tells PhillyVoice that he filed a police report, but was told the District Attorney’s Office won’t pursue the case.

“I guess the more adult thing to do would be to get off and place them on the curb, but I didn't care enough to stop really.” – South Philadelphia bicyclist 'cheekflapperer'

The bicyclist said it’s a matter of South Philly funeral homes treating PPA-approved loading zones as their own personal parking spaces, “but even the application says they cannot treat it as their space nor place cones in the loading zone.”

“I only really did anything when the cones were a little too close for comfort to where I ride. I guess the more adult thing to do would be to get off and place them on the curb, but I didn't care enough to stop really,” he said via email. “I think [the driver] was so upset because I did it maybe once a week to different funeral homes that placed illegal cones out, and he was just in the right place at the right time to confront me.”

He noted that this was the first time anyone confronted him over his cone-kicking behavior.

“Cutting me off twice, with the second time almost forcing me into traffic on the other lane, was beyond what I consider justified,” said the bicyclist, who provided police with the vehicle’s license-plate number belonging to the parlor’s owner. “The detectives said I made their job really easy since I came with all his info; it wasn't hard for me to figure out who the guy was.”

The legal discussion wound through potential aggravated-assault felony to misdemeanor harassment charges, but the matter went nowhere as “the DA refused to press the case.”

“That's part of the reason why I just made this public: I'm pretty much done with the legal route,” he said. “I figure maybe someone Googling the business will see this and make another funeral home choice.”

A spokesman for the District Attorney’s Office said Monday that he would look into the case and calls to the funeral home involved weren’t immediately returned. Since there were no charges filed, PhillyVoice is withholding the alleged driver's identity. But the video caught the eye of the Bicycle Coalition of Greater Philadelphia.

“When drivers on Philadelphia streets intentionally put the lives of cyclists in danger, putting the information out there using social media is important, but so is alerting the police, immediately,” said BCGP communications manager Randy LoBasso, noting that improved infrastructure could help avoid these sorts of confrontations. “Cyclists need to call 911 when something like this happens, as well as alert the local police precinct.”