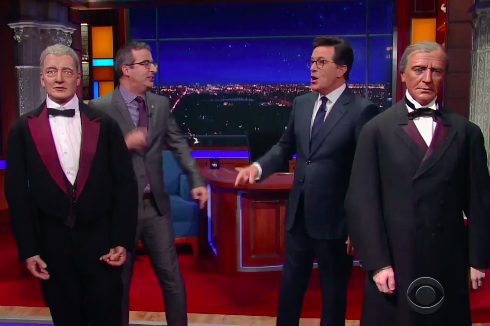 It was a sad day in January when Gettysburg's Hall of Presidents and First Ladies Museum — a Madame Tussaud's of American politics — shut its doors for good and auctioned off its collection of creepy likenesses.

The upshot of the closure, precipitated by decreasing museum attendance, was a bullrush of moneyed individuals and networks ready to purchase the wax figures at prices ranging anywhere from $1,000 to $8,000—the Teddy Roosevelts and Abe Lincolns.

Anyone who figured that would be the end of it was dead wrong. Oliver and wax Warren Harding joined Colbert on Friday night's episode of "The Late Show," where the two hosts launched into a spirited debate about which of Harding and Zachary Taylor was the greater presidential dud. Both statues were rolled out and a showdown of insults ensued.

"Nineteen percent of Americans think that Zachary Taylor was one of the kids on 'Home Improvement!'" Oliver said.

"President Harding was an early proponent of commercial aviation," Colbert retorted, "because while Harding was president, even he wanted to flee the country."

Although Taylor somehow binged on fruit — or otherwise, as some contend, was poisoned by Southern adversaries — and although Harding's administration presided over an oil scandal that seems light by today's standards, neither ex-president holds a candle to Pennsylvania's only POTUS, James Buchanon. That is, in terms of being considered "the worst."